Peter Bogdanovich’s directorial career has been in the wastebasket so long it’s hard to remember he was once one of America’s most promising directors. I stumbled upon the DVD of Bogdanovich’s forgotten adaptation of the Henry James novella for sale really cheap. I purchased it with an eye to comparing his approach to a Jamesian tale with Scorsese’s take on James’ acolyte Edith Wharton. Bogdanovich is, in many ways, a polar opposite to Scorsese; where Scorsese is vigorous and eruptive, Bogdanovich presents a cool, studious, deceptively simple approach, emulating his idols Howard Hawks, John Ford, and the naturalistic side of Orson Welles. Bogdanovich’s fondness was less for visual pyrotechnics than for verbal repartee, and he had tried, after scoring his breakthrough with elegiac nostalgia study The Last Picture Show (1971), to recreate the flavour of character-based, motor-mouthed screwball comedy with the hits What’s Up, Doc? (1972) and Paper Moon (1973) and the egregious flop At Long Last Love (1975). 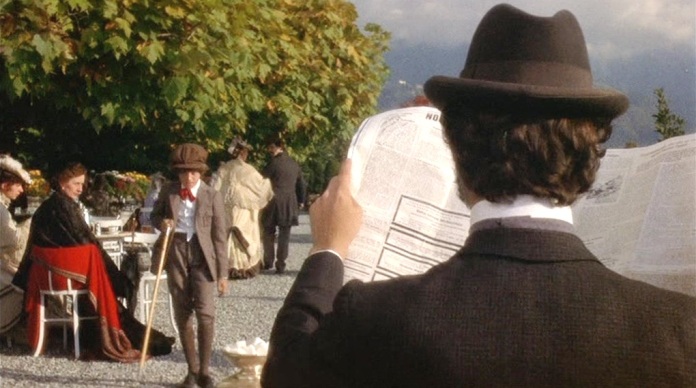 Daisy Miller originated as a kind of vanity project. In a relationship with his discovery Cybill Shepherd, Bogdanovich had tried to talk Orson Welles into directing the project with Shepherd as the eponymous heroine and Bogdanovich playing her romantic foil Winterbourne. Welles replied that whilst he thought Shepherd perfect for her role, Bogdanovich ought to direct the thing himself. The screenplay was written by Frederic Raphael, who has been one of the most incisive and talented of adapters of classic texts, including Far From the Madding Crowd (1968) and Eyes Wide Shut (1999). Daisy Miller has the feel of an intricately personal work. Indeed it confronts several aspects of Bogdanovich’s life—his adoration of Shepherd, his own feelings of being trapped between cultures (an American, he had lived much of his youth in Europe), and his reputation for emotionally chilly films. Stanley Kubrick brought out his adaptation of Barry Lyndon the same year as Daisy Miller and suffered much the same accusations of coldness. In truth, both films present a case for the necessity of emotion, of clear human communication and interpersonal values, by demonstrating worlds that lack them.

Daisy Miller and Barry Lyndon share many qualities. As adaptations of classic literary works, both are acutely conscious of stylistic presentation, rejecting the plush, cardboard dramatics of old-Hollywood “Classics Illustrated,” and forcibly reinventing their cinematic grammar to communicate a world with a far more sedate, socially intricate sensibility. This basically means that their directors refused to jump around a lot. Instead they keep their cameras still, trapping their characters in the camera’s unblinking lens as thoroughly as they are trapped by social circumstances within the narrative. These films are, then, aggressively modern by being consciously anti-modern. So many of James’ stories are essentially about the same thing: social pressure and how it warps human potential. His stories retain an urgency about this pressure long past the end of the social milieu they describe because James’ personal anxiety over his tightly repressed homosexuality charges their drama with a still-relevant sense of the necessity of keeping certain passions in check. 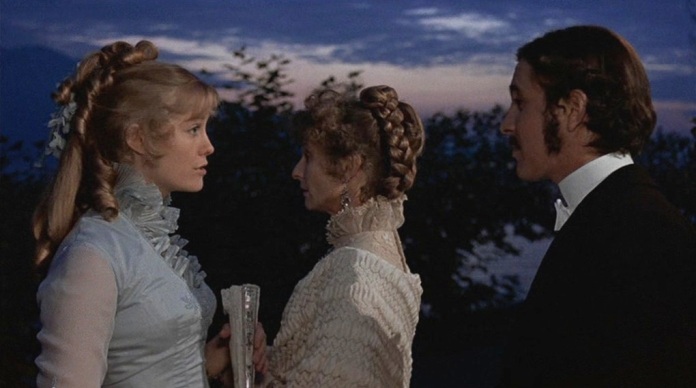 The story is uncomplicated. In 1879, Frederick Winterbourne (Barry Brown) meets Annie P. Miller, whom everyone calls “Daisy,” when both are staying at a hotel on the shore of Lake Geneva in Switzerland. Frederick is visiting his snobbish old biddy of an aunt, Mrs. Costello (Mildred Natwick). Daisy is touring the continent with her frail, neurotic, socially awkward mother (Cloris Leachman) and her brattish younger brother Randolph (James McMurtry, son of Larry, who of course penned The Last Picture Show). The opening shot, in which Randolph emerges from his hotel room and sets about mixing up the precisely arranged ranks of to-be-polished shoes outside, establishes this character as the type who creates havoc wherever he goes and doesn’t give two hoots for adult European propriety. Winterbourne is also an American, but has been educated in Europe, belongs to an expatriate colony in Rome, and has scarcely ever been home; he dresses and looks like a young Marcel Proust. Winterbourne, as the name suggests, is cool and reserved, even as he obviously delights in talking with the garrulous, blithely non-intellectual Yankee girl.

Winterbourne’s aunt talks about the Millers as if they were subhuman. As she reports the hotel gossip to him, and, in a small marvel of true observation of how we are drawn into conspiracies of social prejudice—the things we say to get along with the in-crowd—Frederick finds himself singing her tune of “oh yes, Daisy’s completely uneducated” even whilst he cannot shake his attraction to her. Winterbourne takes Daisy to an historic landmark about which Byron wrote a poem, delighting in Daisy’s blithe indifference to being unchaperoned. They quarrel when he has to refuse her request that he, rather than the family’s attentive manservant Eugenio, become the Millers’ guide in their upcoming tour of Italy. Later, in Rome, Daisy becomes the talk of the town, and not in a good way, when she proves receptive to any number of gentleman callers, including the superficially charming, but absurd ladykiller Mr. Gionavelli (Duilio Del Prete). She spends day after day promenading with Gionavelli, much to the mockery of Roman staff and the contempt of expatriate high society, most forcibly embodied by Mrs. Walker (Eileen Brennan).

Bogdanovich’s distinctive touch is to give the film a tone not unlike a period edition of one of his screwball comedy homages, and suggests the tensions that sustain that genre have some roots in this style of socially observant material. The verbal exchanges move at a dizzying pace, whether from Daisy or from Mrs. Costello. The central duet of Daisy and Winterbourne resembles the catch-me-if-you-can note of Hawks’ Bringing Up Baby, which Bogdanovich had already given a makeover with What’s Up Doc? insomuch as the it’s the male who is constantly on the back foot trying to relate to the female. Randolph, with his dismissive, bratty attitude towards Europe—everything about the place, including the fact he can’t get his hands on decent candy, drives him crazy—is a pure old-Hollywood comic tyke. Daisy Miller is not, however, a comedy; it is an observation of behaviour, driven by Winterbourne’s inability to come out of his reserved, gentlemanly shell and take a real stab at courting Daisy. The film’s subtlety, yet with a complete lack of arty posturing, is admirable, as Daisy is baldly and consistently honest about herself and her sensibility. Yet Winterbourne only belatedly understands this, largely because with the tide of innuendo and obscene theorising around her dalliances keep him uncertain of her character. Winterbourne cannot identify whether Daisy is just what she seems—a flirtatious, but essentially innocent girl with nature-child reflexes—or the cheap, uneducated nouveau-riche tart everyone is eager to think her.

The film was largely dismissed because of Shepherd’s performance. Shepherd’s never going to be a candidate for my favourite actress, either, but she fulfills her role well. She presents exactly that right type of persona—a talkative, intelligent, but slightly uncouth and unsophisticated girl whose general impact is to delight some men and to be like nails on a blackboard to many others. In fact, the bulk of the film’s emotional tone must come from Brown, who, as Winterbourne, is sounding board for all that occurs. Brown, who had previously given a fine performance in Bad Company (1972), is a delight as an emotionally caged man, wary of and even occasionally offended by Daisy (as when he attempts to approach her and Gionavelli, but retreats in glum shock when Gionavelli kisses her), but consistently drawn to her. The film is loaded with Bogdanovich’s stock actors of the time, drawing particular venomous excellence from Eileen Brennan, whose society matron tries briefly to extricate Daisy from potential social disaster; when this is met with laughing indifference, curdles to venomous spite. She will later, quite literally, give Daisy the cold shoulder for bringing an ounce of messy, raucous life to one of her soirees.

Daisy finds even this malignancy rather absurdly entertaining. She is completely unafraid of consequences; indeed, she can barely imagine them. When Winterbourne, deciding to walk by himself in the evening, walks into the Colosseum and embarrassedly avoids the shadows that team with rutting couples. Inevitably, he encounters Daisy and Gionavelli, laughing at him. Winterbourne, with quiet intensity, demands they leave, and snakily suggests to Daisy that she has confirmed for him other peoples’ opinion of her. Within a few days, he learns she has been taken ill, and she soon dies. Over her grave stands her now unhinged mother, her silent brother, a distraught Gionavelli, and a meditative Winterbourne, who is left with the knowledge, imparted by Gionavelli, that Daisy really was as innocent as she seemed. Winterbourne is left alone by the grave knowing she was waiting for him to make a move, and concludes to himself, “I have lived too long in foreign climes,” as the camera retreats from him, disappearing in a glaze of transcendent white.

It’s a sublime, tragic conclusion that acts to the rest of the film’s gossamer texture like an unexpected punch. Almost before he knows it, Winterbourne finds he has lost something terribly dear and vital in his life, and what had seemed like endlessly beckoning future is suddenly cold history. It also causes one to re-evaluate what one has seen and heard leading up to it in an infinitely more subtle and meaningful way that the self-conscious temporal gymnastics of, say, Memento. Indeed, James was one of the first modern writers to analyse the disconnect between perspective and reality.

At 91 minutes, Daisy Miller is a triumph for Bogdanovich’s concise, but packed technique. He often fills frames with detail, like the telling moment at the graveside when it’s clear Mrs. Miller has cracked up, a throwaway touch in a group framing, that refuses to force the drama but communicates itself thoroughly. As Bogdanovich himself testifies in his commentary on the film, much of the film’s melancholic underpinnings came true, later—the disintegration of his relationship with Shepherd; finding himself later at the graveside of murdered lover Dorothy Stratten; Barry Brown’s suicide three years after the film’s release; and the complete snub the film received at the time. Yet Daisy Miller is a fine wine that’s aged mighty well.