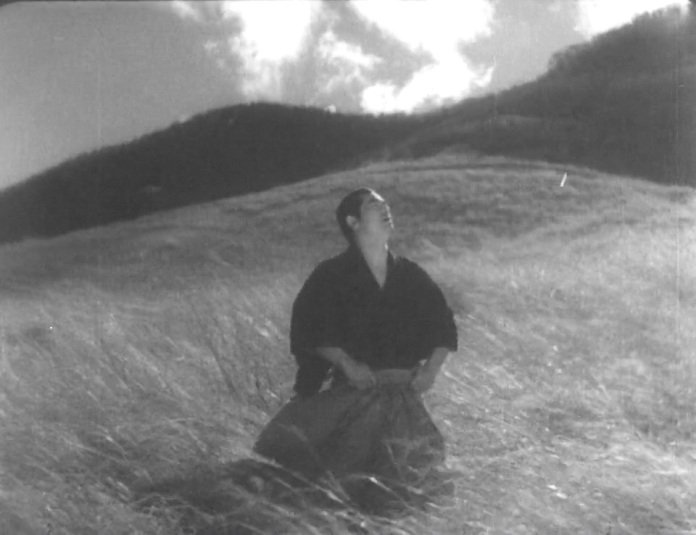 Before he made Sanshiro Sugata, Akira Kurosawa worked for years as an assistant director and screenwriter. He worked on several projects where, he later reported, he had been left to his own devices in getting them completed. We could consider that he essentially directed these films—including Uma (1941)—himself. Nevertheless, Sanshiro Sugata was the first completed feature film to carry the credit “Directed by Akira Kurosawa.” Sanshiro Sugata has a compact energy and sense of form that establishes a cinematic intelligence far above the ordinary. It portrays, in an immature and limited fashion, the images, ideas, and emotions that will recur in complex and nuanced ways throughout Kurosawa’s career. Released when WWII was still raging, it was edited by nearly 20 minutes after the occupation, and the excised sequences only exist in very ragged form. Based on a popular novel by Tsuneo Tomita that would have a half-dozen other adaptations in the next 50 years, Sanshiro Sugata feels like a foundation text not just for Kurosawa’s career, but also for the whole genre of Asian martial arts movies. You know the drill—impulsive student learns from stern master how to master himself, as the means by which he transcends from try-hard to great warrior. A vast swathe of genre filmmaking, from Star Wars to The Karate Kid, owes a big something to this film. 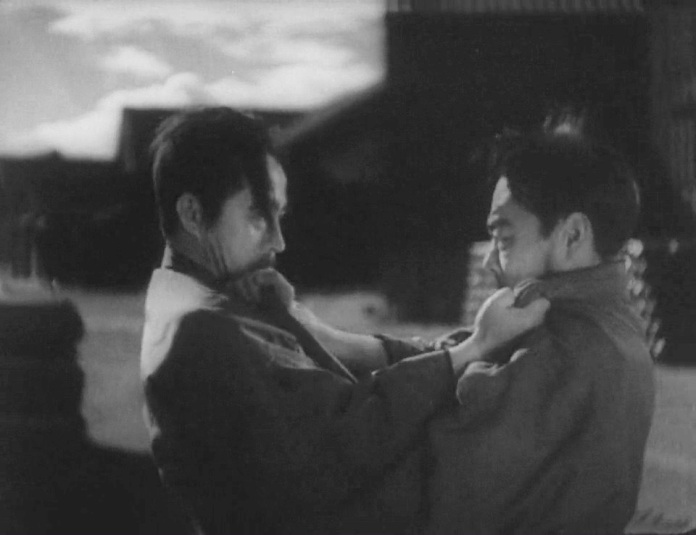 The film is set in the 1890s. Sanshiro, embodied by the appealingly average-looking Susumu Fujita, wants to become a martial arts master. He comes to the seedy Jujutsu school run by Monma, who lounges about with his indolent, aggressive students, incensed by the rumored superiority of the new fighting style of Shudokan Judo practised by Sensei Yano (Denjirô Ôkôchi). Monma leads his students to attack Yano on the street. Cornering him on the bank of the canal, the students all end up pitched into the water, and Monma finishes up pinioned and ashamed. Worshipful of a new hero, Sanshiro volunteers to wheel Yano to his school in a deserted rickshaw. Time passes, and we rediscover Sanshiro showing off his new Judo skills, beating up street toughs and Sumo wrestlers. Yano is angry at this thuggish display, Sanshiro, now shamed, throws himself into the muddy pond next to Yano’s house, angrily declaring his intention to die. “Go ahead and die, then!” Yano shouts. Sanshiro spends the rest of the night clinging to a rotten stake in the centre of the pond, where, in studying a flower, he realises the fragile nature of human existence and essence of a transcendental world-view, which gives him the self-insight to abase himself before Yano. 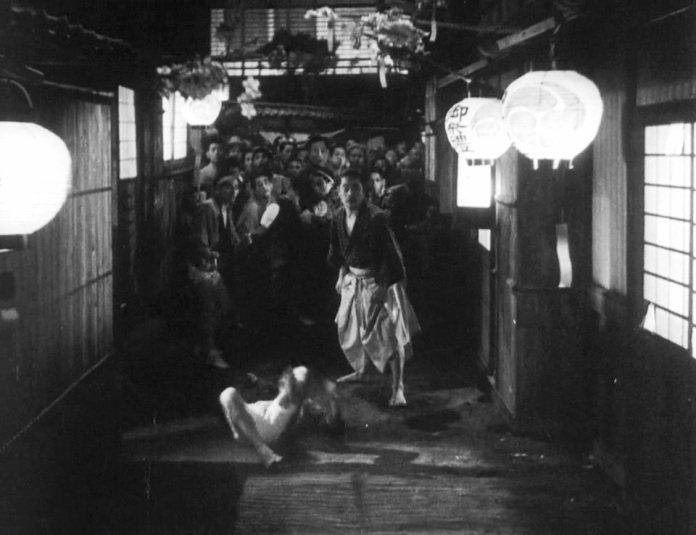 That’s the kind of pseudo-mystic jive we’re so familiar with in the genre and that Kurosawa portrays vividly, even though it’s cornball. Kurosawa would entirely toss out such claptrap from his later films. Kurosawa’s heroes usually have utterly corporeal talents, mixed with large dashes of guile; they generally prevail against enemies because they’re smarter. More typical of Kurosawa is the subsequent development of Sanshiro becoming a great, but reluctant warrior. When he is let back in from the cold of Yano’s displeasure, he is chosen to fight in an exhibition match between his school and Monma’s, with future employment in training police officers at stake. He throws Monma against a wall, killing him and causing Monma’s daughter to attempt to stab him later. Such prowess attracts the dour attention of the Ryoi Shinto School, in the shape of star student Gennosuke Higaki (Ryunosuke Tsukigata), a dapper, gimlet-eyed gent who, as one student says, resembles a large snake. Higaki is eager to fight Sanshiro. But Sanshiro’s next fight is to be against Higaki’s sensei, the recovering alcoholic Murai, played by an actor who would become one of Kurosawa’s fondest faces, Takashi Shimura. Standing amidst this fraught trio is Murai’s pious daughter Sayo (Yukiko Todoroki), scared of the obnoxiously attentive Higaki, protective of her dissolute father, and attracted to Sanshiro. Sanshiro is tortured by the idea that he might kill Murai. 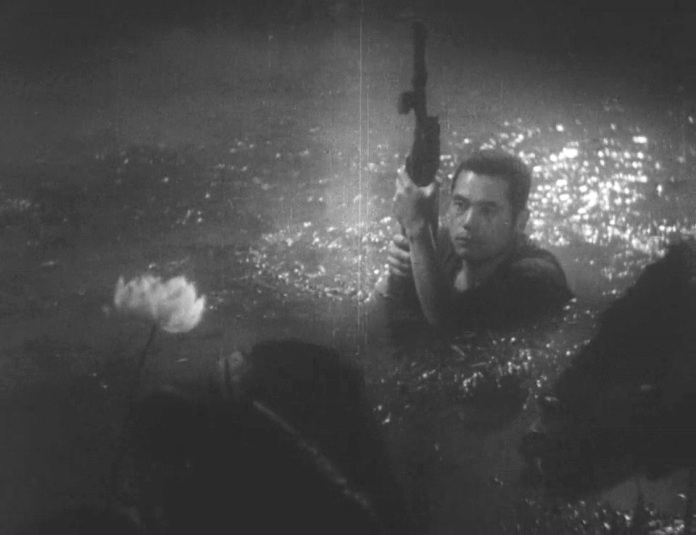 It’s here that the film’s only note of wartime propaganda is struck, when the school’s priest (Kokuten Kodo) admonishes Sanshiro for his reluctance, reminding him that his duty to the school demands he fight Murai and that this will be a truly selfless act. This “duty, right or wrong” moment conflicts with the texture of the film and with Kurosawa’s oeuvre, but then he only made Sanshiro Sugata after having several projects knocked back by the wartime censors. Sanshiro is, however, one of Kurosawa’s familiar, conscientious, all-too-human heroes. In combat with Murai, Sanshiro is nearly brought down by the elder sensei’s skill, but finally he gains the upper hand, the valiant older man rising agonisingly to his feet repeatedly only to suffer another violent toss, before conceding. 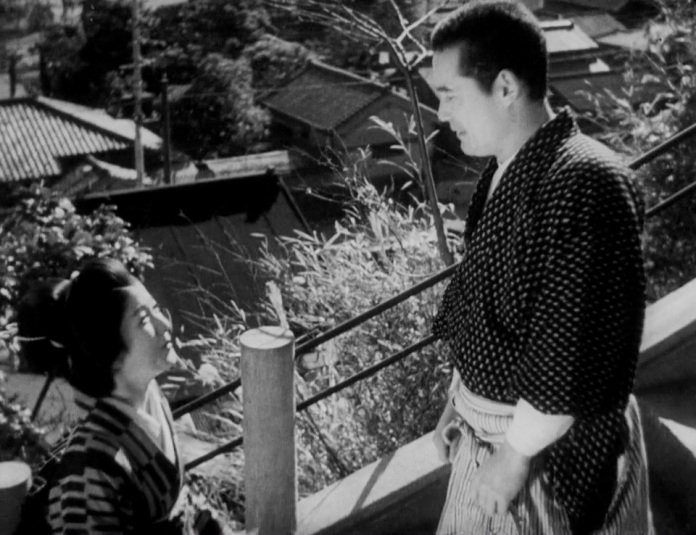 But Murai doesn’t die. As he recovers, he gets Sayo to invite Sanshiro to their house, and Sanshiro becomes a friend. When Higaki finds him at their house, he promptly challenges Sanshiro to a duel to the death. Their confrontation is staged on a reed-clad hillside during a strong windstorm. Higaki nearly topples Sanshiro, but Sanshiro, remembering the flower (flower power!), resurges and defeats Higaki. A brief coda follows, where Yano and the priest discuss the fact that Higaki has reformed and forgiven Sanshiro, and that Sanshiro has decided to travel. On the train leaving town, Sanshiro promises Sayo that he will return. 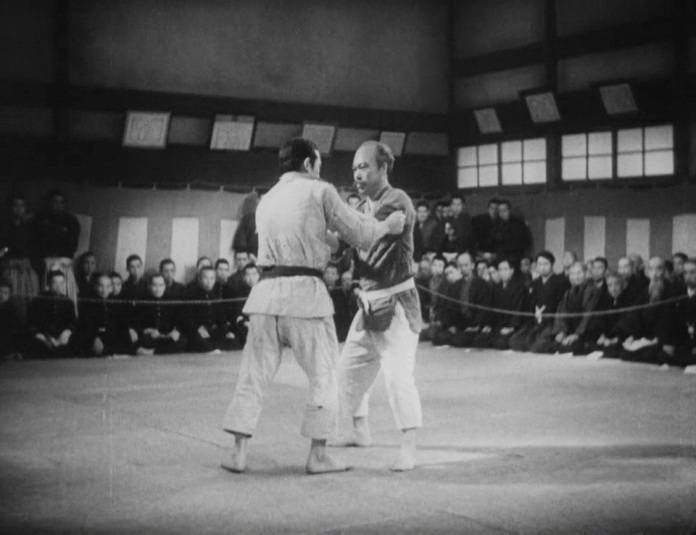 Although the story of Sanshiro Sugata is generic and familiar, it’s a vivid experience—swift and entertaining. Many debut films suffer from imbalance as budding directorial talents test out their ideas without much thought for the overall texture of the film, but Kurosawa barely puts a foot wrong. As in his later work, his close-ups are carefully thought out and sparingly employed. Perhaps the most memorable shot in the film is of Munmo’s daughter, having just seen her father die, staring implacably at the camera, her grief and madness registering as the tiniest muscular twitches. Kurosawa’s background as a landscape painter is always apparent in the way he frames his actors in relationship to the environment, interested not just in their faces but in the behaviour of their whole bodies. The core action scenes are developed in a continuum of intensity. The poise of his camera makes Yano’s early victory over Munmo’s jujutsu brats look effortless; to Sanshiro’s eye, there is no indication of the draining physical and spiritual force required. Later, Sanshiro’s fight with Murai is filled with close-ups of their sweating brows as they engage in a deathly dance, each balanced on a knife-edge between defeat and loss. Finally, when Sanshiro and Higaki battle, the whole earth seems to explode into fractious elements. 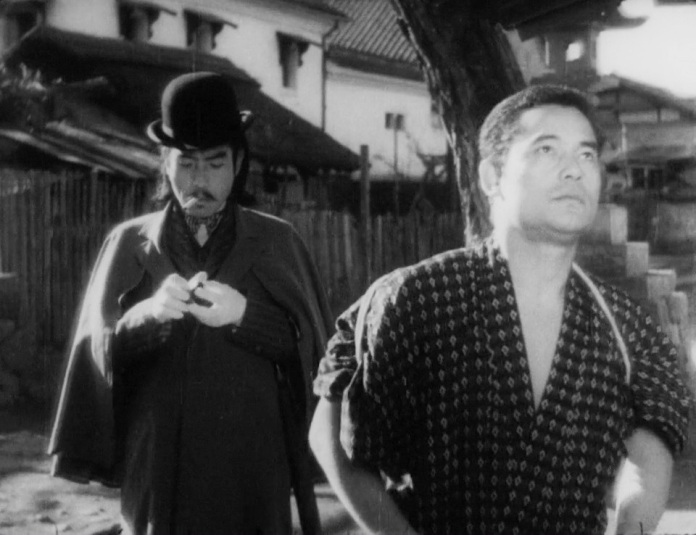 Kurosawa’s intense, almost pantheistic relationship to nature as a reflector and counterbalance to humanity is strikingly nascent. As he would do so often later, atmospheric touches overtly or subtly set the tone of scenes—from the insects incessantly chirping in the background when Yano castigates Sanshiro, to the breeze that underscores the hollow-hearted, alien Higaki’s entry into Murai’s house, and finally, to the epic winds and racing clouds of the final elemental clash of the two men—not between good and evil, exactly, but between the humbled, humane, and responsible, and the dictatorial, arrogant, and grasping. Kurosawa would later rarely offer hissable villains like Higaki. His villains tend to be either foolish, or so collectively ill-defined as to be nearly abstract symbols of tribulation, or shaded reflections of the heroes. Higaki is the man in himself Sanshiro has defeated. 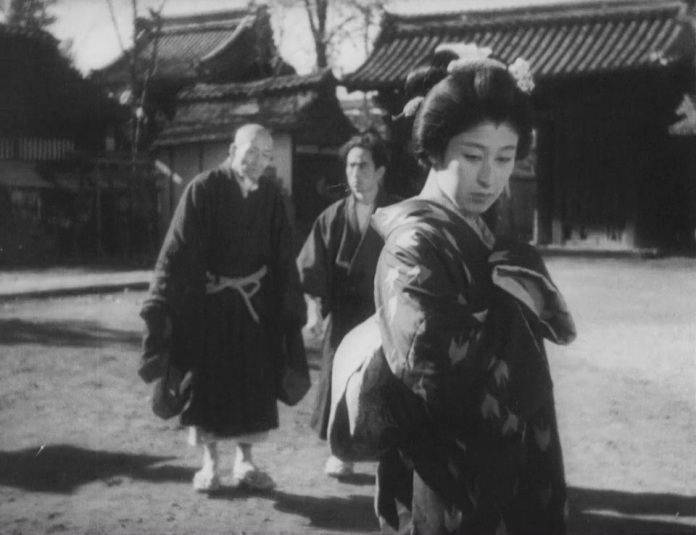 Higaki’s introduction is so utterly splendid—his umbrella handle enters the film before him, tapping Sanshiro’s shoulder—that his eventual unmasking as a cardboard-thin opponent emphasises the limitations of straight genre for Kurosawa’s strength of style. It’s another possible indicator of when it was made that Higaki dresses like an English gentleman, complete with bowler hat, where Sanshiro wears traditional dress. In many regards the later film that best displays Kurosawa’s growth from this point is Sanjuro (1965), one his few straight genre films of later years, a funnier, but also angrier film than Sanshiro Sugata. Toshiro Mifune’s title character and Tatsuya Nakadai’s villain represent a similar conflict, virtually separate to the rest of the plot—that of men who see too much of themselves in each other. Mifune’s victory releases not joy, but a sickening welter of blood and the ronin’s self-disgust and disavowal of a violent path. Such dark duality is also a consistent motif, particularly in female characters, clearly present here in the mirror of Munmo’s burning-eyed daughter and Sayo, and Sanshiro’s fear that he will turn one into the other if he kills her father, too. 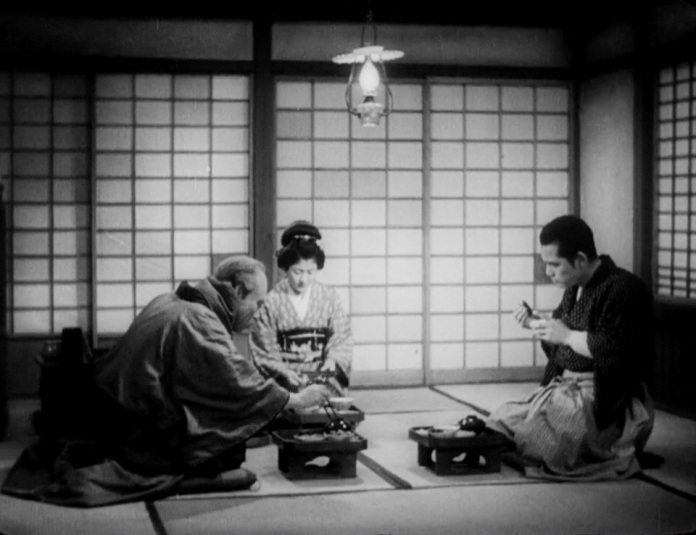 Kurosawa’s distrust of violence—concurrent with his fascination with it—and love of humanity is ultimately confirmed by the sentiment of Sanshiro and Murai’s friendship and Higaki’s late alteration. Sanshiro is defined as much as the Seven Samurai by his learned determination to use his gifts to fight for a value, and for other people, rather than for self-aggrandisement. And it work for Sanshiro, as he apparently converts Higaki. Although naïve, it’s still a fascinating message for a Japanese film of 1943. All of that said, there isn’t much more of the dramatic and character richness of Kurosawa’s later work. Sayo is a regulation, radiantly submissive female far from the pithy heroines of The Hidden Fortress and Sanjuro, although it might be fair to say she anticipates the cosmically forgiving Lady Sué of Ran. Yano is a stock, wise Yoda figure. Higaki a bad guy for barely any more reason than the fact that he acts creepy. 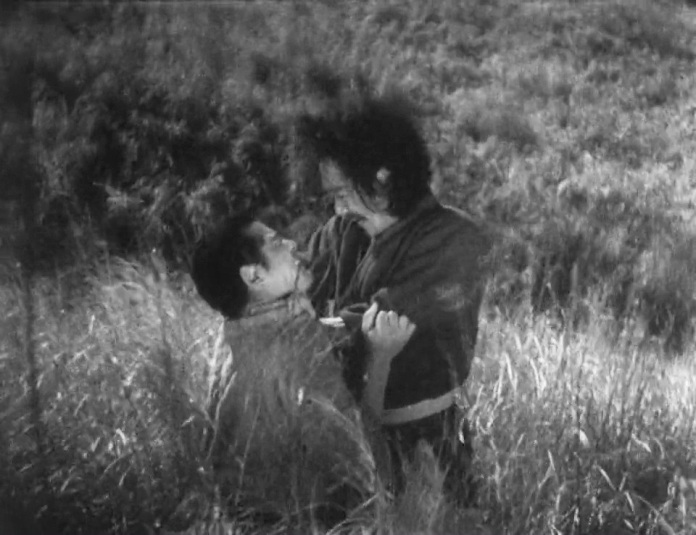 More superficially, familiar stylistic flourishes are present. When Sanshiro is showing off on the streets, Kurosawa likewise shows off, with a series of mirroring crane shots descending down to the street level, showing crowds back away from the attacking Sanshiro as he races forward and picks out men to beat up. This kind of physical-force camera work would later have a profound effect on directors like Godard and Scorsese; likewise, his small dash of slow motion—when Munmo dies, a panel falls like a gentle petal from the wall onto the dead man’s back. Like the device’s similar use in the early stages of The Seven Samurai, it emphasises a sudden, sad realisation of the nature of death in what has been, up until now, a game. Sanshiro Sugata is a truly enlightening sketch of so much that was to come.