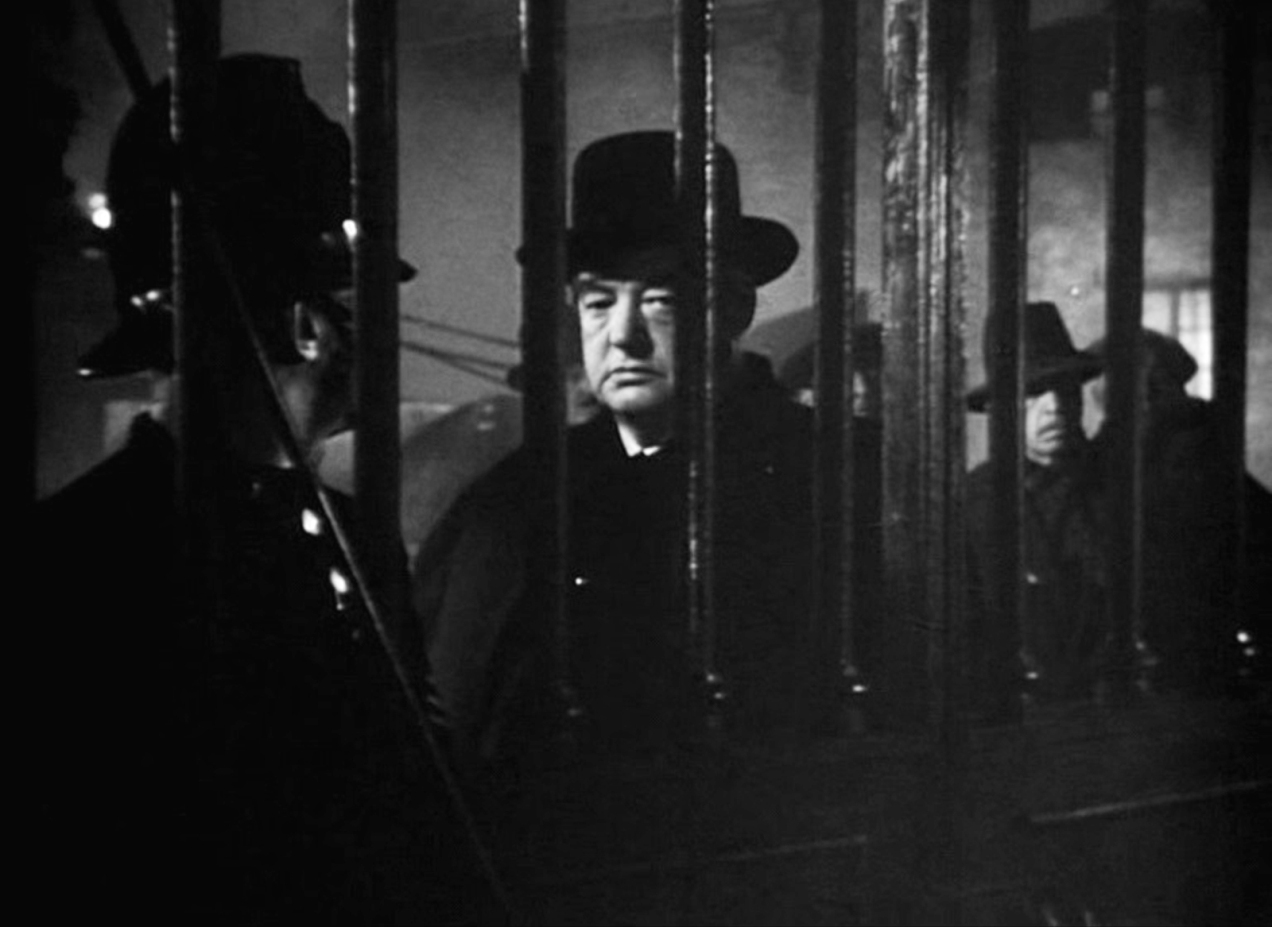 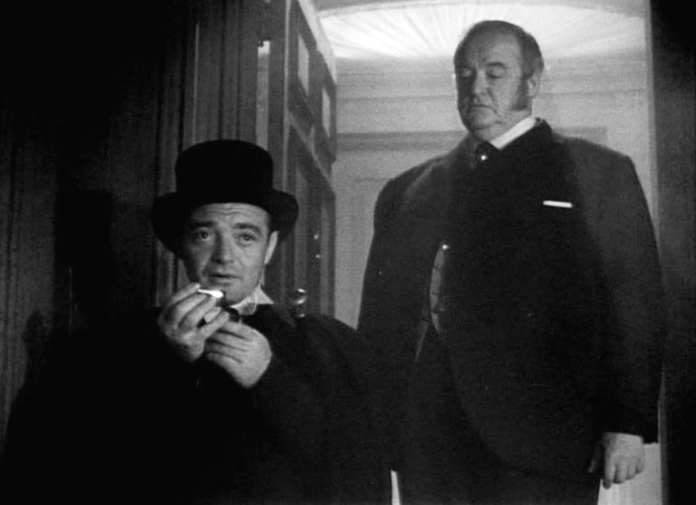 A tale of a vigilante policeman that begins with the peal of a church bell—this could describe Dirty Harry (1971), the biggest hit of Don Siegel’s career. And yet it also describes The Verdict, Siegel’s directorial gambit of 25 years earlier. Siegel had been for many years the top editor at Warner Bros, contributing his superb montages to films like The Roaring Twenties (1939) and Across the Pacific (1942). As Siegel put it: “I actually shot more footage for Warner Brothers than any of their highly touted directors, but when I went to Jack Warner and said I wanted to be a director…He said ‘Look, I can get directors a dime a dozen. But who am I going to get to do the action sequences, the inserts, and the montages?’ So I said, ‘Fine, pay me what you pay the directors, and I’ll carry on doing that stuff for you.’” 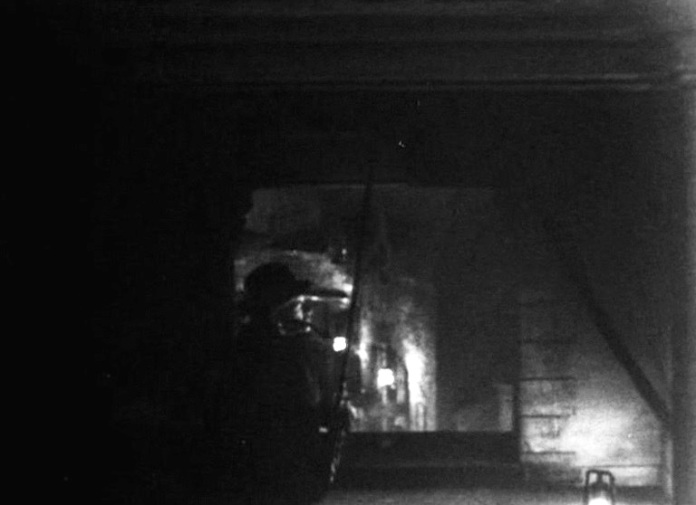 After a couple of shorts and a lot of patience, he finally got to helm a vehicle for one of Hollywood’s strangest, and yet most entertaining, double acts: Peter Lorre and Sydney Greenstreet, who had proven their star worth without Humphrey Bogart in two terrific films, The Mask of Dimitrios (1944) and Three Strangers (1946). The Verdict is Victorian era, and right from the brilliant opening shot where Siegel’s camera swoops in on the tower where the bell tolls in Newgate Prison’s chapel tower for a condemned man on a fog-wreathed night, it’s easy to spot his talent. As well as establishing Siegel’s visual fondness for vertiginous heights and angles, the shot also anticipates one in Dirty Harry in which Siegel’s camera swoops upwards dizzyingly from Harry Callahan’s (Clint Eastwood) torture of Scorpio in the centre of a football field; both shots entwine the sometimes cruel and salutary nature of a thirst for justice with godlike perspective.

The condemned man here is Harris, convicted for the murder of social scion Hannah Kendall. The man who convicted him, Supt. George Grodman (Greenstreet), meditates on the ironies of a profession where success means taking a man’s life: “I have no personal feelings. We are only instruments of justice, like the court that condemns.” But Grodman is in for a nasty shock. Called in by his superior (Holmes Herbert) at Scotland Yard, Grodman learns from his chief rival—the ambitious, supercilious Supt. Buckley (George Coulouris)—that he has proven Harris’ innocence. Scandal erupts and tars the Yard’s competence, and Grodman is forced to retire. The case haunts him, not just because of Harris’ fate, but also because the murder victim’s nephew, Arthur Kendall (Morton Lowry), is his next-door neighbor and friend. Grodman sets out to write an account of his career. 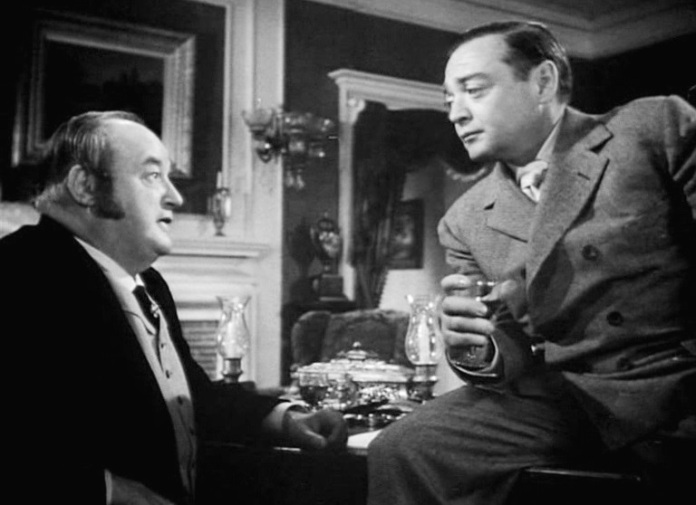 Grodman’s best friend, artist and bon vivant Victor Emmric (Lorre), attempts to cheer him up by throwing him a birthday party, inviting Kendall and another next-door neighbor, liberal MP Clive Russell (Paul Cavanaugh). The pairing of Kendall and Russell is disastrous. Russell detests Kendall who, as a mine owner, exploits and degrades the men who are Russell’s constituents. Russell threatens to silence him once and for all when Kendall promises to pressure him with the identity of his secret mistress. Kendall, not a popular man this night, also argues with his girlfriend, singer Lottie Rawson (Joan Lorring), before settling down to bed. The next day, Kendall doesn’t answer the knock at his door by his batty, smitten landlady, Mrs. Benson (Rosalind Ivan), and she runs next door to fetch Grodman. He busts through Kendall’s door, and warns Mrs. Benson not to look… 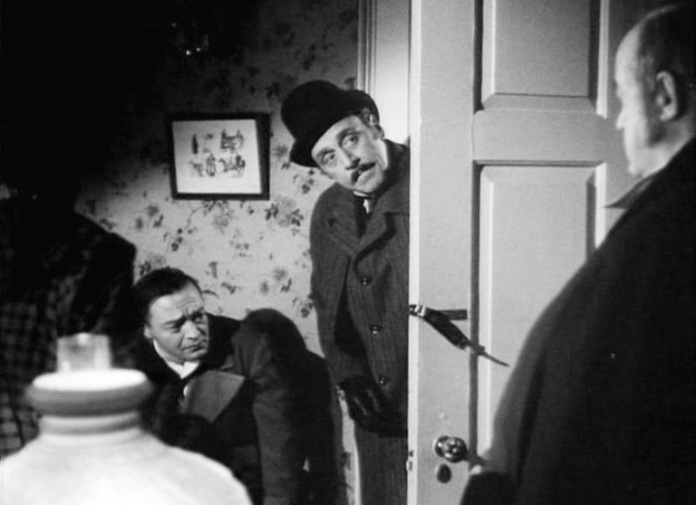 It is assumed that whoever killed the aunt returned for the nephew. Buckley leads the investigation, and casts his unctuous suspicion on everyone. The case is baffling, as there’s no explanation for how the killer got out of the locked room—even a burglar (Clyde Cook) can’t work out a method. Grodman is hugely amused by Buckley’s floundering, and he and Victor begin a little sleuthing, chiefly an excuse for Victor to romance Lottie. Lottie is suspect when she attempts to retrieve a valuable watch fob she gave to Kendall, and is caught by Buckley. Attempts to locate the fob prove fruitless until it’s suggested it was buried with Kendall, prompting his exhumation. Lottie is released when the fob is found, but is now stalked by a shadowy presence assailing her with warnings not to talk about Russell and his mistress. But Lottie has already blabbed about that to Buckley. 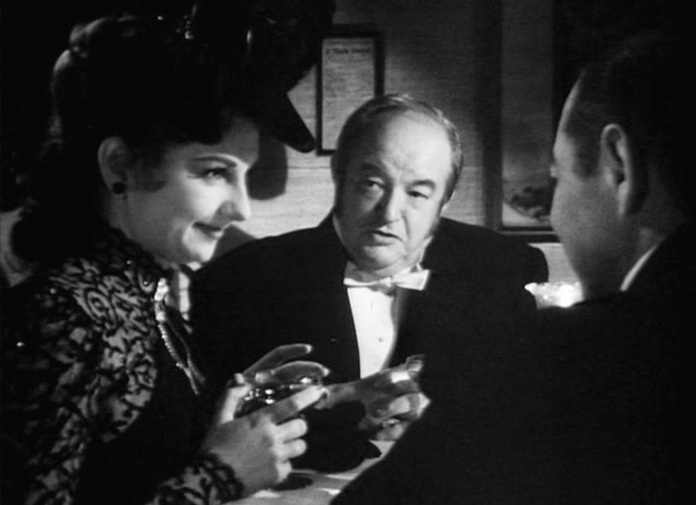 Russell becomes the chief suspect, and his refusal to divulge the name of his lady friend entraps him. Meanwhile, Victor’s suspicions are closer to home, and he searches Grodman’s apartment. When the stalking presence tries to enter Victor’s bedroom, he takes a shot at it. Russell is tried, and sentenced to death. Grodman convinces Russell to let him track down his mistress, the estranged wife of a Lord, and convince her to confirm his alibi. Grodman pursues her all over France, only to catch up with her at her funeral. With all avenues of saving Russell from the gallows exhausted, Grodman triumphantly confesses to the murder. Having realized that Kendall killed his own aunt for her money, and then used Grodman in setting up Harris for the fall, and with no way of proving it, Grodman took justice into his own hands. He used many contrivances designed to muddy the waters and fool Buckley as much as possible, but won’t let Russell pay the price for his acts. 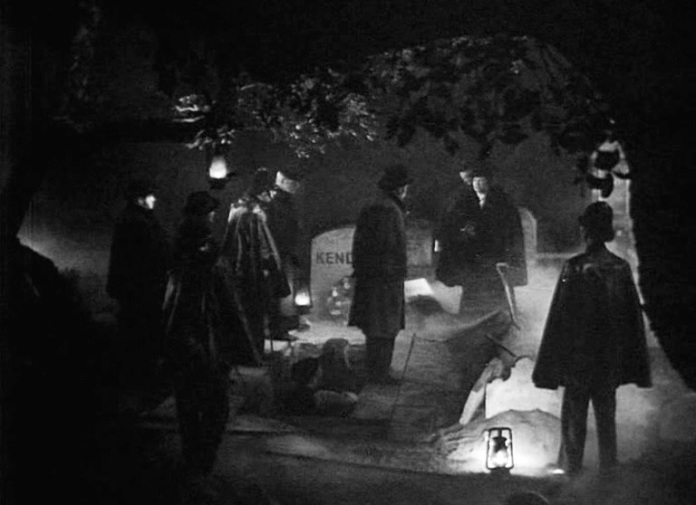 Siegel handles the stringent production expertly, slathering the action in fog and shadow. With some terrific actors, Siegel conjures the kind of ripping yarn that’s a pure pleasure to watch. Even the awful Cockney accents of the bit players add cheesy fun. Siegel replies to the evidently low budget with an economic, but technically accomplished style, with expressionistic camera angles, careful lighting (witness the ghoulish delight that is the exhumation scene), and inventive model work (as in the opening shot) to conjure an elegantly bogus Victorian London that looks like the one you imagine when reading a Sherlock Holmes story. Indeed, The Verdict was based on a novel, The Big Bow Mystery, by Victorian writer Israel Zangwill. Zangwill’s novel was a social satire and riff on the detective genre that was already cliché-ridden. Siegel and screenwriter Peter Milne toy with the novel’s elements to give it a more individual moral imperative. The murder victim is changed from an orator of leftist values into a filthy example of capitalist evil, and the progressive, Russell, is the pillar of conflicted conscience whose life must be saved. Grodman’s actions and motivations have been altered to make his crime utterly sympathetic. 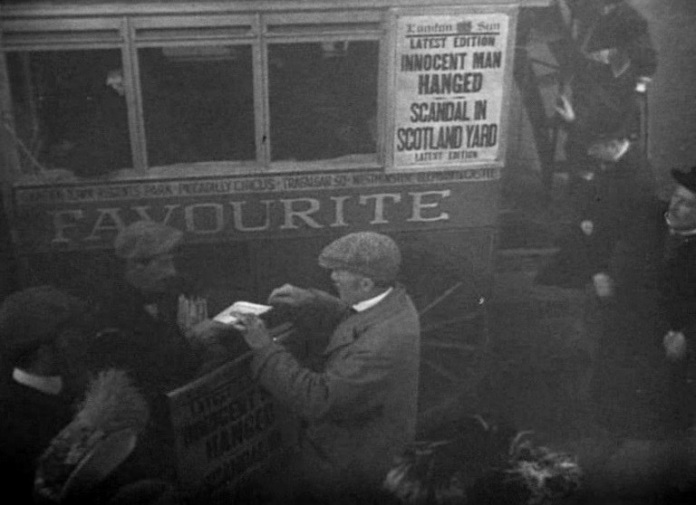 But it’s the detail of Grodman’s ironic status as both avenger and murderer that proves Siegel was fascinated by the idea of breaking the law in a heinous fashion to achieve justice, which casts Dirty Harry, still often regarded merely as a sop to reactionaries, in a different light. Harsh reversals of moral expectation and identification are a Siegel trademark—witness the people who have to fear and kill their own neighbors in Invasion of the Body Snatchers (1956), the schoolgirls who are far more dangerous to the soldier than he is to them in The Beguiled (1969), or the criminals who gain our empathy in Escape From Alcatraz (1979). Many Siegel heroes are criminals, bastards, or not what they appear to be. He took that last device to an extreme in Body Snatchers, but also including heroic figures like Robert Mitchum’s army officer pretending to be a gangster in The Big Steal (1949) and Shirley MacLaine’s whore-dressed-as-a-nun in Two Mules for Sister Sara (1971). 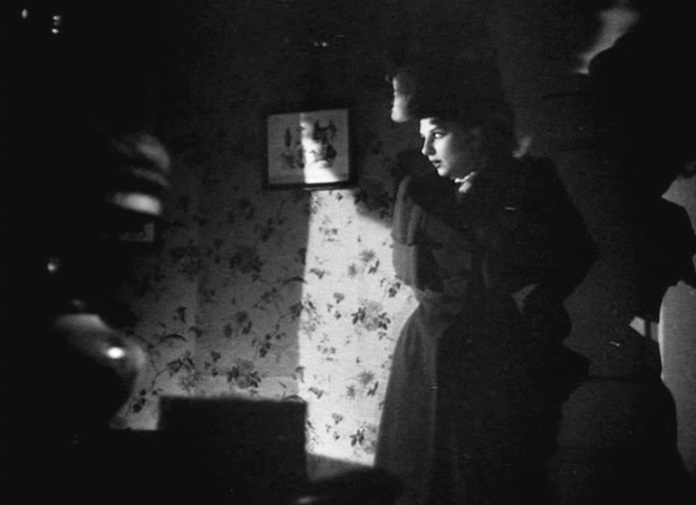 The Verdict is a transitional film. It straddles genres that were running out of puff in post-war Hollywood—the crisp, quaint mystery yarn with an Anglophile bent, Charlie Chan, Sherlock Holmes, Mr. Moto, Philo Vance, The Falcon, The Saint, and all the other detective franchises and one-offs and the Universal-style gothic chiller. The Verdict pays homage to these, whilst, simultaneously, the harder, dark-drenched, morally ambivalent noir genre was taking grip. Siegel toys with the structure, sympathies, and style of The Verdict to make it count as a noir work; though the first two-thirds of the film are fun in the Holmesian tradition, the last third in which Grodman’s efforts to save Russell gain in grim urgency, take it to another level. 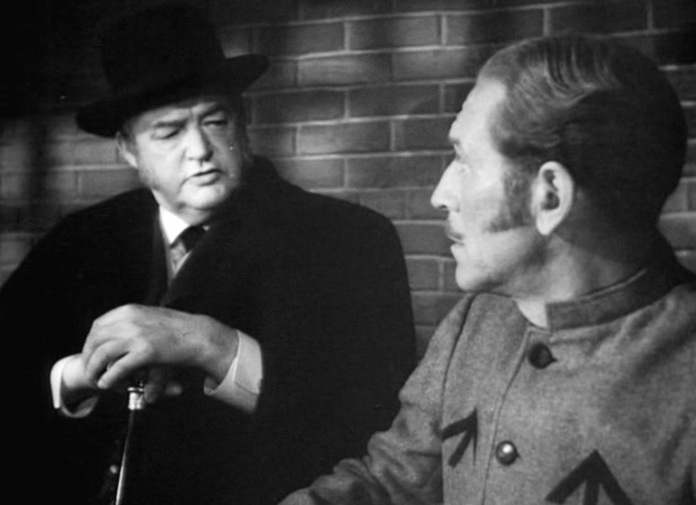 Siegel observed of Greenstreet and Lorre, who work together so well on screen they seemed to have been doing it for decades, that they actually had very different work habits: “If you changed so much as a comma, Sydney was upset…He wanted to get his cues down to the word, and studied his part very carefully. On the other hand, not only didn’t Peter study, but he would come on the set as if he didn’t even know what studio he was in.” The Verdict riffs on their screen personas. It’s fun seeing Lorre play a party animal and ladies’ man, but Victor is also incurably morbid, crowing, when Kendall’s body is exhumed that “I’ve always had an unconscious desire to see a grave opened, especially at night!”and complaining, in illustrating Grodman’s book, “I’ve done three stabbings in a row! How about a nice juicy strangling?” The film uses Lorre’s real-life hobby of sketch art creatively. And there’s a recurring gag where Grodman remarks on Buckley’s attempts to fill Grodman’s britches, emphasizing the capacious girth of Greenstreet’s posterior. Backing them up is Coulouris, always a joy at playing slimy arrogance. One weak link is Lorring’s lousy accent. 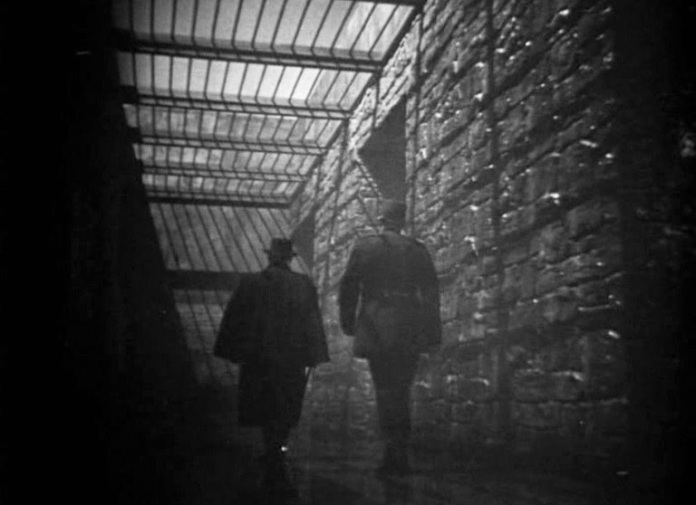 It’s far from being a great or perfect film. It’s weighed down by standard touches, like clumsy comic relief and the ever-tiresome staple of the shoehorned song-and-dance number, here a “racy” song performed by Lottie, in a “Royal Music Hall,” which looks more like a bad theater restaurant. Although it portends many of the themes and interests of Siegel’s career, in other ways, its retro, studio-bound class is at odds with the style the director would develop. With The Big Steal, Siegel dragged the noir film out on location and kept it there, leading to the stark, utterly modern stylishness Siegel had mastered by the time of Coogan’s Bluff (1969) and Dirty Harry. But The Verdict is a delightful melodrama and the sort of film that stands for what Old Hollywood at its best was all about.