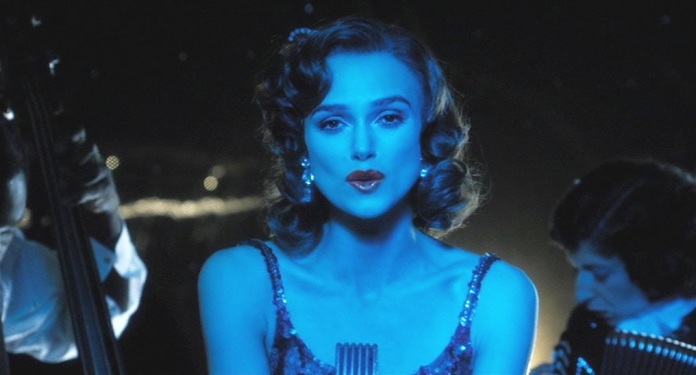 Not for the proud man apart
From the raging moon I write
On these spendthrift pages
Nor for the towering dead
With their nightingales and psalms
But for the lovers, their arms
Round the griefs of the ages,
Who pay no praise or wages
Nor heed my craft or art.
—In My Craft or Sullen Art, by Dylan Thomas

The above poem comprise the last words of the The Edge of Love. They are used as a kind of thematic underlining of what we’ve seen. They’re also the reason that the film has been made, to the extent that any film like this is made—to get off on the presence of greatness that lends some sense of weight to an otherwise feckless tale. At least a musical biopic is self-explanatory—there’s music we like on the soundtrack with the people who made it magically returned to youth by cinematic sorcery. Dylan Thomas, for whom the film largely has nothing but contempt, is the reason why it’s been made. 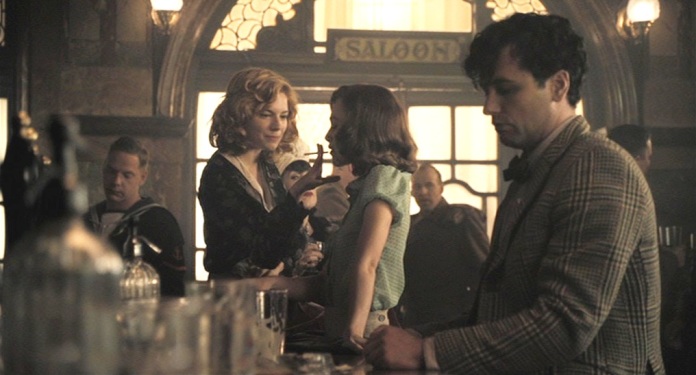 I always come to the end of films like Sylvia, Pollock, Control, or Surviving Picasso—those in which the tortured arty soul ends up like a goldfish flapping on the floor or the prick gets his comeuppance from someone speaking as the voice of contemporary sexual politics—wondering why they are made, why they treat their subjects so. In Thomas’ case, a drunkard who collapsed and died in a Greenwich Village bar at age 39, there’s not much image to despoil, and this is part of the problem. Anthony Burgess fought to have Thomas acknowledged as a meticulous craftsman who endlessly revised his ecstatic phrasings, a man used up at least as much by his own dedication as he was by drink. Thomas’ work in the film is portrayed as nothing more than an excuse to ignore his kid. It’s a common complaint that artist biopics rarely offer much in the way of insight into the art. Thomas’ poetry features throughout The Edge of Love, in disjointed voiceover readings that reduce them incoherent snatches of prettification.

The Edge of Love was directed by John Maybury, former experimental director with a Schnabel-esque love of visual gibberish who broke out with Love Is the Devil (1999), a similar portrait of Francis Bacon’s affair with his rough-trade criminal boyfriend. An obtuse, often insufferable work, that film was at least aggressive in studying how a ruthless soul makes for strong art and bad housekeeping. I wonder then if the reason such films are made is to take peeks into modes of lifestyle otherwise forbidden to mainstream filmmakers. A lot of artists have juicy private lives. And a lot don’t. I don’t foresee a film about Anthony Trollope, holding down a lifelong career as a designer of mailboxes whilst writing great English novels, anytime soon. But in what other kind of high-profile movie sporting rising stars of import are you going to get explorations of multiple-partner romance that doesn’t also include a singalong to “I Say A Little Prayer”? Films about adults doing adult things don’t get much play these days beyond certain restricted cable channels.

The Edge of Love threatens to study a ménage a trois. The film’s early hype, its poster with Sienna Miller and Keira Knightley lying back on the grass, red lipstick lacquered on and encouraging you to take a dive in, promised gorgeous decadence and anarchic indulgence. Fooled you! Miller and Knightley lounge in bed together and giggle like they’re having a sleepover; they certainly don’t engage in any Sapphic naughtiness. Thomas does bed both women, but, of course, that funny business isn’t allowed to stand. 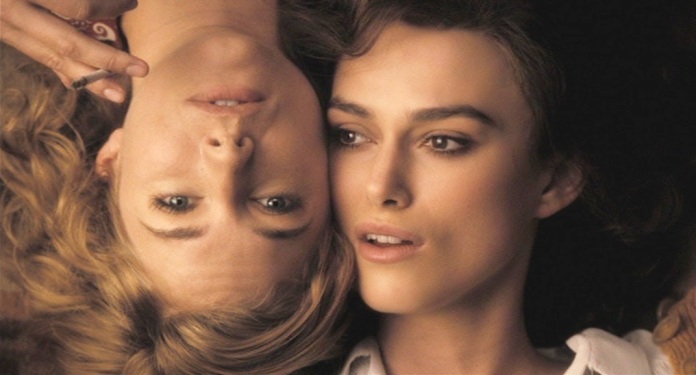 I’m talking around the point—which could be because I’m not sure what the point is. One could have made The Edge of Love to explore the way society degrades talent in the living and then celebrates it once they’re dead. Thomas’ words are prostituted by wartime authorities, yet he can barely make enough to feed his family, forcing him to live by sucking friends dry, to create work that now gets films made about him. No, wait, this isn’t what the film’s about. It’s about two bestest best friends, Caitlin Thomas (Miller) and Vera Phillips (Knightley), who hide underneath the covers and giggle and make kissy faces at each other and prance in Super 8 home movies and cry when one of them like becomes a total slut with the other’s guy. No, wait, it’s about Vera’s husband, tragic soldier William Killick (Cillian Murphy) who is desperately in love with her, suffers in war, and comes back horrified to find his wife’s had it off with her old boyfriend, the fancy-pants poet who’s also spent all his money. No wonder William goes taking pokes at loud-mouthed pseudo-socialist bitches and shoots his Sten gun through the wall to shake the smart-asses up a bit. No wait, it’s a courtroom drama where Thomas tries to destroy Killick because of love for Vera. No wait, I’m bored.

According to critics and biographers, the film is based in vague, specious speculation anyway. Most films of this sort end up, even if they don’t want to, as finger-waving moralising. Artists take and give nothing but words back. The male artist who fucks freely will be condemned for his feckless, misogynist ways. The female who does so will be celebrated for her liberation even if the world in the film condemns her. Behind every great man is a woman. Get married and stay that way. Good thing you listened to your parents and became a lawyer. Love’s intended audience—and they sat all about me in the theatre—can walk away tut-tutting about disgraceful behaviour, whilst having received a sugar rush from it. I recall my old high school English teacher doing after we’d been watching Tom & Viv (1994). Eliot! That bastard! Leaving his wife in a loony bin! For being a loony! Just goes to show you! No normal person’s marriage disintegrates because of mental instability, no. Only those of famous poet-type male chauvinists. 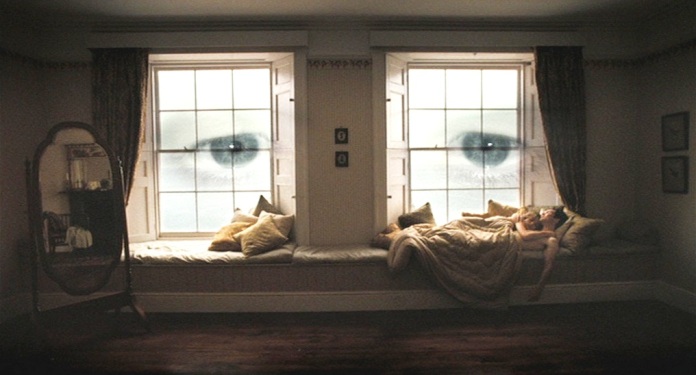 The Edge of Love begins well. Maybury concentrates on texture, and the first half-hour is a dense web of impressions. He plays energetically with Dennis Potter-esque evocations of jazz-age images of perfection and exoticism colliding with hard reality in Vera’s singing act, staged bizarrely in underground air raid shelters. Thomas, Caitlin, Vera, and Killick live under the shadow of the Blitz, the threat of death a constant reality, streets reduced to dark warrens of menace, even the familiar refrains of romance taking on an existential quality and Thomas’ sonorous radio readings acting as shadowy artistic conscience for this calamitous age. Both Vera’s act and Thomas’ poetry then are presented as dichotomous cultural responses to an age of omnipresent darkness. But the truth is, the film is not in the slightest bit interested in this notion, and the drama moves to the false refuge of the Welsh coast to become a glorified bedroom farce played as lacerating character study. What begins as a layered study of the relationship between artistic effort and society becomes just another tale of what happens when you dip in more than one honey jar.

One of the few films that effectively portrayed why artists do such things was Philip Kaufman’s Henry and June (1990). Henry Miller, his wife June, and their mutual girlfriend Anaïs Nin, use each other and enjoy each other in an attempt to gain experience and push their sense of life to the limit. The Edge of Love never approaches such exploration, largely because it’s not sure what it’s exploring, and comes up with just a bunch of arty boozehounds hurting each other. The film makes sure to shame pacifistic, romantic, socially outcast, mercurial Thomas before honourable upright soldier Killick. The last images of Love see Dylan and Caitlin heading, grey-faced and dour, into oblivion, whilst Vera and William settle down to become happy rose growers. Is this really what Maybury and screenwriter Sharman MacDonald wanted to tell us?

If I’m aggressively misunderstanding this film, it’s because I went into it dreading exactly the type of film I got. “Why do I sleep with other women?” Thomas asks rhetorically at one point. “Because I’m a poet!” This got a big laugh out of the audience; of course guys only become poets to get laid as often as possible. Despite Maybury’s efforts, The Edge of Love ends up as another facile bit of patronising, bohemian eavesdropping, ending by whacking all its characters as firmly on the knuckles with a hickory switch as it can get away with considering that, all in all, the drama has added up to nothing.

What one gets out of it is some uneven but generally solid acting. Nobody except Rhys is at home with their accents, but I’ve never found that as important as some critics insist it is. Energy and expressiveness are far more important. Murphy is the least well-used, putting his protean, pansexual physiognomy in such a square part. Knightley plays a woman who is as much a fascinating siren’s image as she is reality to the men in her life. Miller is the rampaging wild woman whose energy goes all outwards rather into her art. Knightley’s never really topped her ironic casting in Pride and Prejudice (2005) as a woman whose intelligence both subverts and increases her attractiveness. Here she’s left playing another sobbing Celia Johnson wannabe. Miller and Rhys both exude a kind of solidity that threatens to eat through the tinnier reductions of their characters. In films like Casanova (2005), Factory Girl (2006), and here, Miller always takes me by surprise as a broadcast from a slightly earthier age of screen femininity, with her broad freckle-spotted cheeks and surprisingly husky voice. She fills the cliché of the fiery Irish boho girl with real zest, whether thumping Thomas’ head against the floor or picking out her stitches in sadomasochistic fury. 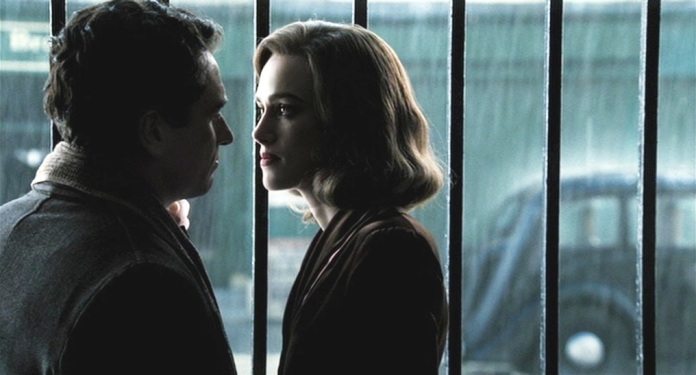 Rhys is good to watch, too. He had previously evoked a pitch-perfect Lord Byron in TV’s Beau Brummel: This Charming Man, and here presents a Thomas somewhere between the rosy-lipped fawn of Augustus John’s portraits and the bloated disaster area of his Chelsea Hotel end. Thomas once told a story about being fascinated by his grandmother’s grey face so much as a boy that he crawled under a table to lift her skirt and see if all the rest of her was grey, too. There’s not much of that Thomas in The Edge of Love for Rhys to have fun with.