Considering that I’ve always taken more pleasure in digging through the ephemera of the past and the detritus of pop culture more than pretending that right now is so bloody important, I don’t think I should feel as phony as I do writing this. For starters, there’s the absurdity of the notion that we all have the same “year”. This year saw my enrollment in a Film Studies class that played like a Gary Trudeau satire (now kids, you are to analyse the awesome artistry of Harry Potter and the Philosopher’s Stone). It also saw the release of a stupefying number of films, few of which I’ll ever see. And I inevitably wonder what’s being made today that will provoke interest, excitement, the thrill of the unexpected, the signs of the artful, in 40 years? Where amongst the avalanche of films released this year are the little gems, the future cult films? Are there any? What, in short, will last? Wasn’t it only a few years ago when people thought films like A Beautiful Mind or Crash were important in some fashion?

Many of the best movies I’ve seen in the past 18 months are strange mutts produced by similar lines of thought. Films like An Old Mistress, Boarding Gate, Doomsday, and The Strangers are works made by intelligent filmmakers hunting for the scent of real blood and bone in the suspect qualities of old-school trash, florid melodrama, film noir, and no-budget horror. The year that saw the death of “termite art” theorist Manny Farber could be called a vast aesthetic tribute to his ideas. Or is the increasing tendency to nail films as “Oscar bait” the final process in the dumbing down of pop culture, a great excuse to ignore everything except the new comic book movie, which, by the by, has to provide the requisite amount of “darkness” and “relevance” in “parable” in compensation for the dearth of serious cinema? Sometimes our contemporary culture feels like the victim of a car crash learning to walk again. Either way, I suppose in the next couple of months I may work up the enthusiasm to pretend that David Fincher is some kind of artist and that I care anymore about Clint Eastwood.

There’s a host of said Oscar bait that’s been jammed into the last weeks of this year like a wholesale clearance at a high class but unprofitable carpet warehouse, and many other films anticipated still nowhere in sight (Hurry up, Let the Right One In. Avanti, Gomorrah. Please move your arse, Rachel Getting Married). More than ever, ambition in Hollywood has become a wage-slave in an Oscar-hungry boutique, trading desperately in the Christmas build-up and abandoning the rest of the year, like the Romans did their empire, to hordes of ravening cinematic barbarians. I saw some of the best films I’ve ever seen in the past twelve months, all rather slow in coming down the pipeline of distribution. My world was appropriately rocked by the glory of There Will Be Blood, 4 Months, 3 Weeks, & 2 Days, Death Proof, Paul Verhoeven’s gutsy Black Book, and Francois Ozon’s delightfully weird Angel, and I did not demand my money back for the likes of Atonement, Before the Devil Knows You’re Dead; Eastern Promises; Romance & Cigarettes; Lust, Caution; No Country for Old Men; and Sweeney Todd either.

The Edge of Love

Good, bad, and ugly, these were all works of real cinema that demanded at some point during their running time for us to ask just what our definitions of quality, invention, art, and entertainment are. But what can one say about 10,000 BC, the most boring caveman flick ever made (and that’s saying something—seen Clan of the Cave Bear lately?) or the utter catastrophe of Australia? The limp Get Smart? The pointless The Edge of Love? The instantly forgettable The Other Boleyn Girl? The last two especially would have been prime Oscar nets if they’d had the slightest idea of what they wanted to achieve. 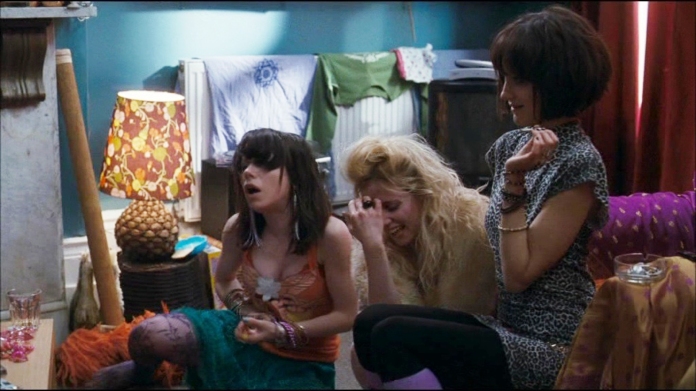 If 2007 was the year for works of grandly calamitous art, reflecting the fullest measure of an anxiety-wearied age by mixing fury and fear in many measures, 2008 reflected a year of transition—it didn’t know what it was about, but knew it wanted things to improve. The strongest fare came from some tried and tested sources. My favourite for the year was Catherine Breillat’s Une Vieille Maîtresse, which forcefully interrogated assumptions about the past, about gender and love, and certain genres of film-making. Mike Leigh’s deft Happy-Go-Lucky, which was badly marketed and even more badly described by most critics, was his most entertaining film since Topsy-Turvy and his most sleekly assembled since Career Girls. More importantly, it extended artfully on themes long crucial to Leigh—the necessity of communal existence and the unnoticed but vital presence of the people who make that existence possible.

It was impossible, after watching Asia Argento lick the blood off Fu’ad Ait Aattou’s bullet wound, to take the likes of The Duchess seriously. It was Asia’s year: as well as Maîtresse and her dad’s The Mother of Tears, she possessed the screen in Olivier Assayas’ gorgeously cryptic Boarding Gate. Assayas’ overcooked dialogue hardly obscures that he’s one of the few directors trying to stare modern dislocation dead in the eye; whereas Tom McCarthy’s The Visitor represents, to my mind, where indie cinema is, for better and for worse. Intense, well-acted, real-feeling, and a movie with something to say, it still leaned heavily on familiar props of the cute little film where people of different backgrounds come together, someone learns a life lesson, and our worthy multicultural fantasies come (temporarily) true—a kind of mix-tape for middle-age wannabe radicals. Still, it sported probably the year’s finest romantic coupling, and could be remembered as the signal Obama Year film. At least it wasn’t Juno. As far as blockbusters went, I found it a year of mixed blessings.

Indiana Jones and the Kingdom of the Crystal Skull

Steven Spielberg didn’t quite nail his return to his finest franchise, with the awkwardly structured, anti-climactic Indiana Jones and the Kingdom of the Crystal Skull. But it delivered a master class in how to shoot comedic action scenes, and had a kind of breezy, throwaway sense of humour (particularly in the delightful support turns of Karen Allen and Cate Blanchett) that stood in high contrast to the dour, lacklustre pretension and sloppy edits of the year’s most astoundingly overrated blockbuster, The Dark Knight. The latter film operated like a straitjacket on one of the age’s finest actors (Christian Bale) whilst liberating another (Heath Ledger, in a good year for Aussies playing villains) all too briefly. More entertaining than Knight and more solid than Indiana Jones was Jon Favreau’s Iron Man, a neatly done, disposable superhero flick that ended up looking like a masterpiece by default, and sporting some of the year’s best acting, even though it wasn’t really as good as we said. Timur Bekmambetov’s Wanted had the potential to be the year’s greatest thrill ride, with its Fight Club-rapes-The Matrix set-up, but something went wrong thanks to garish cinematography and plotting so dumb (did the hero really bring down his enemies with a horde of explosive rats?) a five year old would have been offended. As far as genre bollocks went, Neil Marshall’s giddy, unconscionable Doomsday kicked all their arses: it dove head first into revved-up car chases, gross-out effects, and ’80s references so obvious that the film finally became something of a mix-tape of the films I grew up with—indeed, it’s a film that’s testimony of the unshakable effect of disreputable but fascinating movie-making of the past. I wouldn’t exactly call it good, but it wasn’t dead either.

Aussie cinema’s desperate straits yielded, under the great cloud of Luhrmann’s Australia, Elissa Down’s The Black Balloon, a meat-and-veg little-people film that won a bunch of Australian Film Institute awards chiefly because it made money. It told us that retarded people are occasionally irritating to be around, and that Gemma Ward is awfully cute. Yes, we knew that. Ward was better used—even though she had about three lines of dialogue and spent the whole film wearing a mask—in the best horror film of the year, Brian Bertino’s The Strangers. A thin but beautifully handled exercise in pure dread that proved that someone, at least, remembers what the cinematic frame is about, The Strangers offers the possibility that the horror genre may escape its dreadful rut. Of any of the films I saw with a chance of being remembered as the cinemaniac’s dirty little secret, it’s the type that could fare very well. What else? The greatest film I saw this year—possibly ever—was Tarkovsky’s Andrei Rublev, a titanic work of eccentric artistry that managed to be both austere and implacable, and yet immersive and accessible. Films like that only come along once in a generation. What else? Kurosawa’s Sanshiro Sugata, Kagemusha and The Bad Sleep Well; Rivette’s Paris Belongs to Us; Val Guest’s The Abominable Snowman; Sirk’s The Tarnished Angels; Reed’s The Key; Godard’s The Little Soldier; Carne’s Hotel du Nord; Spielberg’s The Sugarland Express; DeMille’s The Plainsman; Jack Hill’s Spider-Baby; Jesus Franco’s Vampyros Lesbos; Anthony Mann’s Bend in the River; Franju’s Eyes without a Face; Grèmillon’s Stormy Waters; and Fleischer’s See No Evil. These films all remind me that, in the end, cinematic culture is far from being only the mediocrities and minor triumphs of the moment—it’s an evolving thing, depending not just upon what comes out at the moment, but also on the perspective we gain from discovering its history.