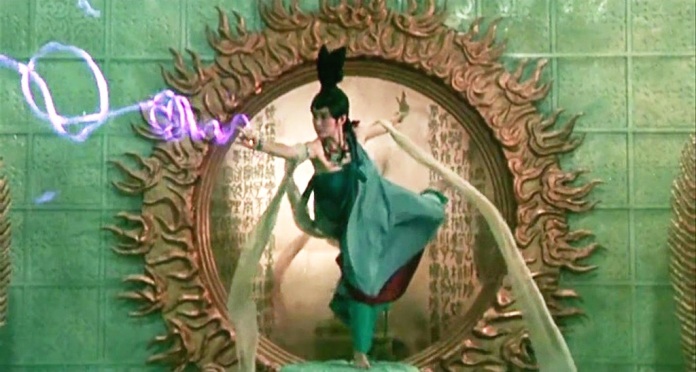 Zu: Warriors from the Magic Mountain made the reputation of director Tsui Hark, and in so doing, redefined the wu xia genre, the staple of Hong Kong cinema. Hark had shortly before gotten in trouble with the governing authorities with his politically minded Violent Encounters of the First Kind (1980), which was heavily cut by censors and flopped at the box office. Determined to conjure a blockbuster, Hark imported Hollywood technicians to beef up Zu’s special effects and production values. His efforts paid off: Zu made $15 million, a colossal sum for a Hong Kong film of the time, and became the kind of movie that still makes most Western efforts to do fantasy-adventure look limp, dull-witted, and wholly uncool. Watching Zu could be daunting to anyone without a feel for the genre and this specific style of filmmaking. Somewhat akin to watching the whole The Lord of the Rings trilogy compressed into a 90-minute film, Zu charges ahead at a breakneck pace and doesn’t particularly care whether you keep up. It’s also a hard film to approach because there are several extant versions, often with whole new plots inserted. So, I’ll just have to take it as I saw it.

The explanatory opening assures us that the title mountain, Zu, is the subject of many legends from Chinese mythology. And now here’s one we made up. In an era in which the nations of Wu are battling for supremacy, Ti Ming Chi (Yuen Biao), a messenger for the Blue Wu, falls in with a chubby warrior (Samo Hung) from the Red faction. They overcome their mutual antipathy when both are attacked by a third faction, and each disillusioned with their cause, end up trying to keep each other alive during a free-for-all-battle. Cornered on a cliff, Chi falls off, and Fatso is captured. And that’s just the first five minutes.

Unharmed in his fall, Chi wanders the countryside until he find himself in a forbidding realm of perpetual darkness, and is assailed by red-eyed, reanimated corpses. He is saved by the timely intervention of a warrior monk, Ting Yin (Adam Cheng). Yin has been called to aid a great old monk, Chang Mei, in battling an evil sect that has been sacrificing children to awaken the Blood Demon, a terrifying flying sheet with a sword in its mouth and cymbals in its hands. Also called in by Chang Mei are two other monks, Abbott Hsiao Yu (Damian Lau) and his student Yi Chen (Hoi Mang), and the trio, with Chi mostly trying to avoid being killed, do battle with the evil sect and vanquish their creepy head priest (Hark-on Fung).

Too late! The Blood Demon, being a sheet, doesn’t like being awakened, and he assaults our heroes, infecting Hsiao Yu with a poison that will transform him into the Demon’s avatar. Chang Mei (Hung again) arrives and manages to temporarily entrap the Demon with his incredible sticky eyebrow power, and a magic, star-powered mirror that can hold the beast for 43 days, until the alignment of the stars change. The heroes are given a mission: first, they must go to the Ice Countess (Brigitte Lin), who is priestess of a hillside fortress temple, to have Hsiao Yu cured, and then locate the cave of Lei Yikkei “The Wonder Girl,” a great mystic who is the current keeper of the twin swords of Sky and Earth, the only weapons that can truly defeat the Demon.

Hark’s a director who puts pace and vivid action ahead of story coherence – a tendency that had reached an apogee with the unwatchable Time and Tide (2000). Zu itself treads the edges of bedazzling incomprehensibility, but miraculously keeps it footing thanks to a solid sense of physical context. Hark’s rapid editing is as much about masking the ropy special effects (in a subgenre that’s often referred to by the less poetic name “wire fu”) in an era long before the balletic CGI of the likes of Crouching Tiger, Hidden Dragon and House of Flying Daggers, as it is to keep things rocking. He imbues the proceedings with a lysergic intensity, and his direction is as close to a perpetual motion machine as any in cinema. Hark, like a lot of other Hong Kong directors of the era, were taking up the challenge thrown down by Hollywood filmmakers like Spielberg and Lucas in supercharging the momentum and imagery of fantasy cinema, and riposted with their own manic energy. That Zu doesn’t take itself very seriously and is filled with self-satirising humour are big plusses. The plot and the approach to it is summed up when a confused Chi asks who the members of the sect are; Yi Chen replies sarcastically, “They’re the bad guys. We’re the good guys. Get it?” Later, when Chi asks Chang Mei if he’s a good guy, Chang testily snaps, “Of course I’m a good guy! Do bad guys wear white?”

When they reach the Countess’ temple, they find the warrior-priestesses there a mob of prickly, crypto-lesbian separatists who detest any male presence, provoking Yi Chen into decrying “It’s women like you made me become a monk!” The Countess won’t heal anyone if she doesn’t come out for her daily consultation before a sacred blue flame, relit each day, burns out. She gets so angry when Ting Yin saves her from fainting whilst healing, that she fights Ting Yin, duelling him whilst they each fly on carved elephants. They’re hot for each other, of course. But Ting Yin, in saving her again from a fall, accidentally ingests the poison she’s taken from Hsiao Yu, and he is soon transformed into the Demon’s avatar, forcing the Countess to try to hold him in by freezing the entire castle, herself, her fellow priestesses, and the visitors in a great block of ice. Only Chi, Yi, and Mu Sang (Moon Lee), one of the younger, more hot-headed priestesses, escape, and when the ice fails to keep the Demon Ting Yin trapped, they have to locate the cave where Lei Yikkei resides. 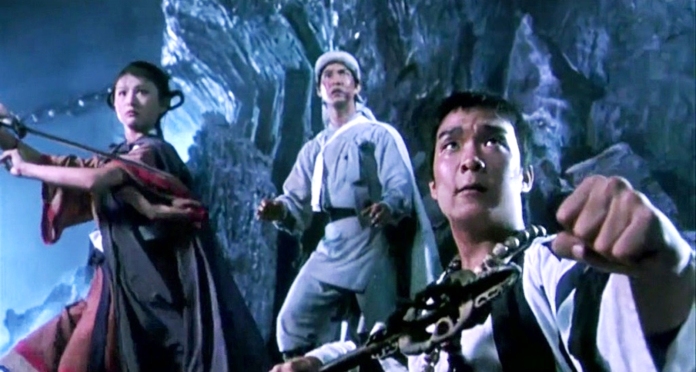 Hark uses that pretext to take the film any crazy place he damn well pleases. John Carpenter acknowledges Zu as a primary inspiration on his Big Trouble in Little China (1986), and the influence isn’t too hard to spot in the style of action, his employment of colour and set-décor effects, and the self-mocking humour. Zu has a joie de vivre and a loopy passion that barely, if ever, finds its way into Hollywood attempts to do the same thing. Most intriguing and delightful about the film is its cheekiness, a constant flow of invention and humour that takes digs at clichés of genre, gender, and generations. The narrative culmination involves the joining of Ti Ming Chi, Yi Chen, and Lei Yikkei into an attuned gestalt mind to battle the Demon, the complete annihilation of gender, generational, and psychic barriers necessary in completing a symbolic union of earth and sky that’s asexual. “Are we still men?” the two lads ask in panic after Lei Yikkei transforms them into super-warriors in cut-off blouses.

They are, yes, but it’s fascinating that here a level of ambiguity in identity, sexuality, and everything else has to be reached to achieve a heroic end. Compare it to, say, Mel Gibson’s The Passion of the Christ (2003), where the ultimate in evil, Satan, is defined by sexual ambiguity. Asian cinema’s long had a notably larger and more interesting roll-call of female heroes. Yu’s narrative is about tension, unity, and division as it manifests in all situations and concepts: the combat of good and evil, men and women, nation-states, and schools of philosophy and religion. The younger heroes learn the hard way that they, not their self-involved, fractious elders, have to take up the baton and effect real change. Ti Ming Chi is a male virgin, and his purity is crucial to his triumph; the Buddhist ideal of annihilation of differentiation of form has to win the day. 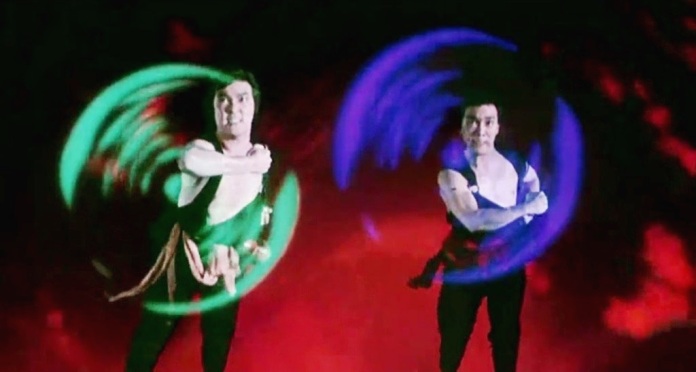 Zu is a glorious romp that tries a bit too hard, but better trying too hard than not trying at all. It doesn’t have quite the heady mix of erotic poeticism and high adventure of Ching Siu-Tung’s great A Chinese Ghost Story (1987) and A Chinese Ghost Story II (1990), works probably influenced by Hark’s film; the tragic romance between the Countess and Ying Tin doesn’t get much time to register in Hark’s, unlike the crucial one in Ching’s — but it is wilder and more spectacular. The visuals are appropriately delirious, conjuring amazing sequences like when the young trio encounters Heaven’s Blade (Norman Chu), who has chained himself on guard at the gate of hell and does battle with the Demon Ting Yin, the heroes desperately dangling from the shattered chains. And there’s the breathless finale in which the Countess sacrifices herself to destroy the Demon Ting Yin, Mu Sang tries to unite the human armies, and the united Chi and Yi destroy the Blood Demon. It’s also worth noting the veritable who’s who of stars of the era: Lin, nominated for Best Actress at that year’s Hong Kong Film Awards, is strikingly charismatic; 17-year old Moon, in her first film, stakes her claim to being the star she was for years after; and the men are all slick and amusing physical presences.