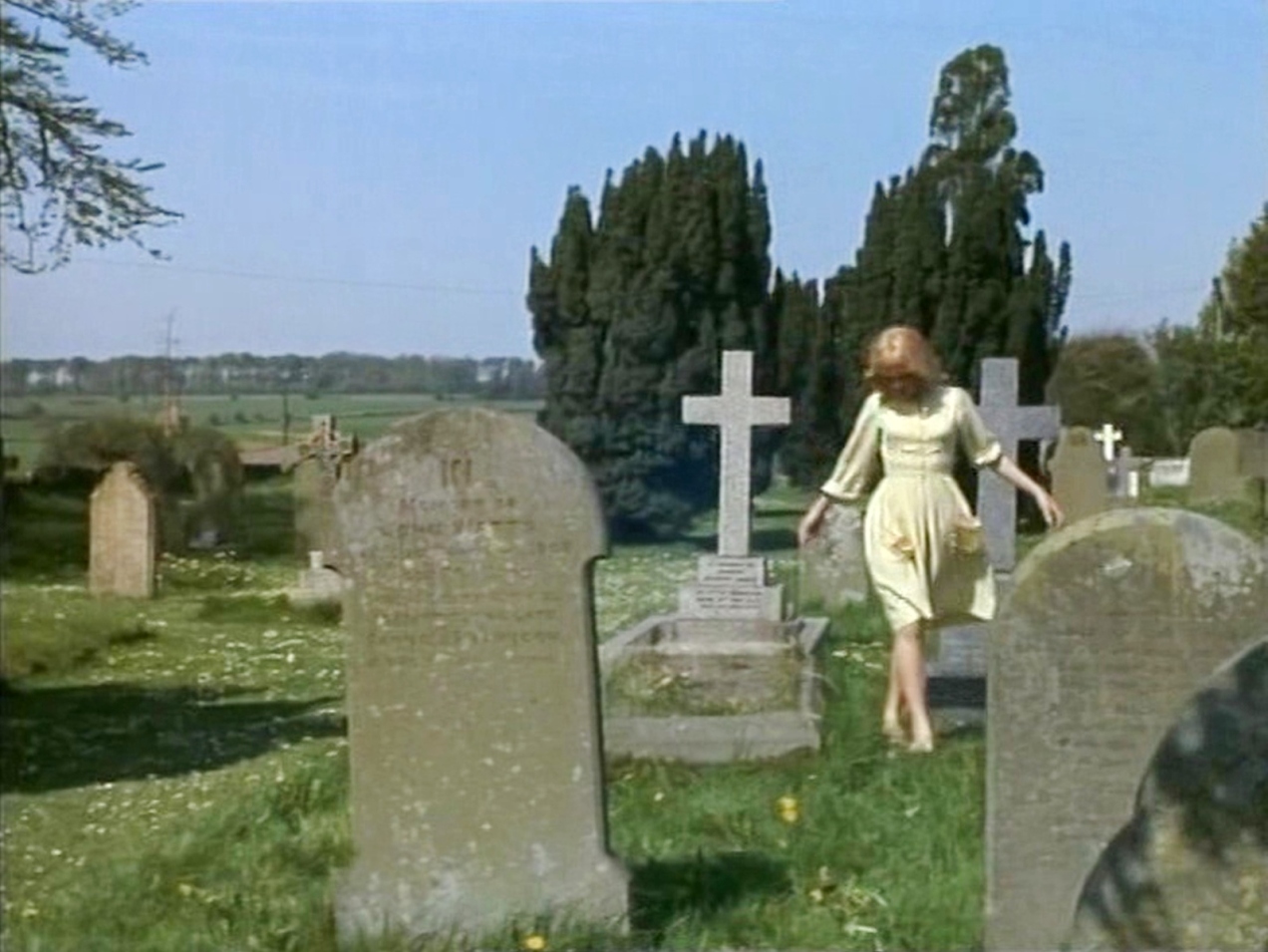 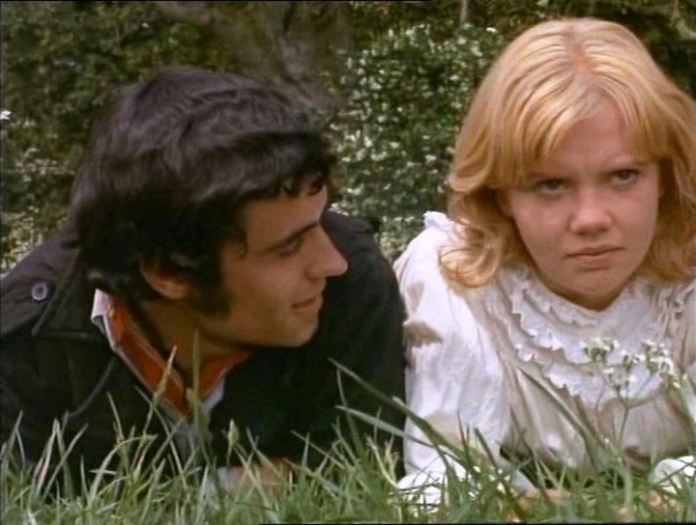 British acting icon John Mills’ only work as a director, Sky West and Crooked, isn’t a forgotten great film, but it possesses a mixture of a pellucid pre-Raphaelite beauty and creeping psychological menace that’s nearly unique in British cinema, and an intriguing islet of rustic peace amongst the generally frantic air of late ’60s British pop-culture. Even more exceptional is the evocation of the English rural landscape and its specific traditions, stylised and yet authentic-feeling all at once, so that whilst unfolding in a contemporary setting, it retains a flavour of timelessness. Mills gave his daughter Hayley and a young Ian McShane two of their best roles as a pair of star-crossed lovers trying to escape a web of corrosive circumstances. 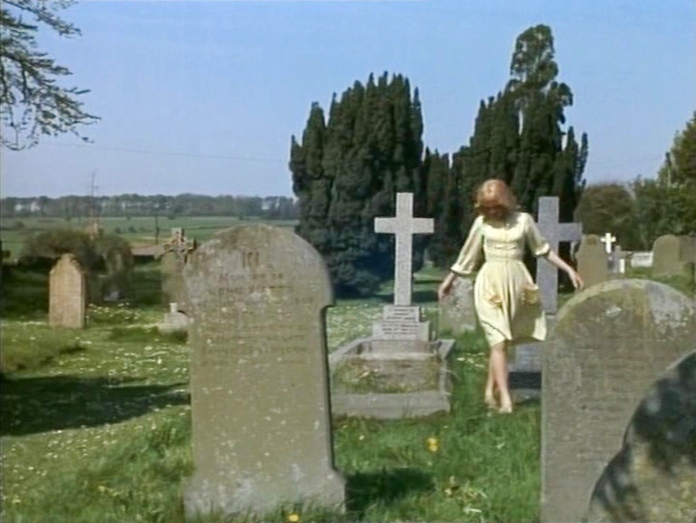 A pre-credit sequence in a field outside a small village sees a young boy, Julian, harass a girl, Brydie, with a shotgun, not realising it’s loaded. When she chases after him and the pair trip and fall, it discharges, bringing alarmed villagers racing to gaze in horror on the results. Years later, the girl, Brydie White (Hayley Mills), has no memory of the event, which left her with a scar on her forehead as well as mildly unbalanced. With a reputation for being flighty, addle-brained, and mischievous to the point of destructiveness, Brydie suggests a rather literal flower child, a variety of dryad or nymph, as she dances about the gravestones and ponders the nature of death when she accidentally kills her pet hamsters by forgetting to give them drinking water. Brydie’s hazy grasp on reality isn’t aided by the disinterest of her alcoholic, hysteria-prone mother (Annette Crosbie) or the aggression of many townsfolk, including the glowering Edwin Dacres (Laurence Naismith), which she is unable to comprehend: she’s regarded as “sky west and crooked”, that is, pretty crazy. Only the village priest, Rev. Phillip Moss (Geoffrey Bayldon), senses that Brydie’s childlike distraction is a coping mechanism that renders her “invulnerable” to their disregard.

When the pushy sexton (Hamilton Dyce) bullies Brydie away from Julian’s grave, a young Gypsy, Roibin (McShane) intervenes. Taken with Brydie, Roibin hovers around the village, and is viewed with the usual disdain by the townsfolk for all the “Gyppos.” Brydie causes a fresh stir when she and some much younger children set up a pet cemetery in the church graveyard to express their confusion over the nature of death and spirituality, which the adults celebrate so solemnly. They earn a rebuke from Bayldon in congregation who nonetheless tries to mollify all sides by offering them a new burial spot. But Dacres, determined to inflict some sort of punishment on Brydie for surviving the accident that claimed his son, confronts her in the graveyard at night with the deadly gun and tells her the truth, which sends her racing off in a screeching hysteria. An abruptly guilty Dacres trips and grazes his scalp on a gravestone trying to catch her. Brydie falls into a river and nearly drowns, only to be saved by an attentive Roibin, who takes her to his tribe’s encampment to recover from a fever, believing the people searching for her are persecuting her. 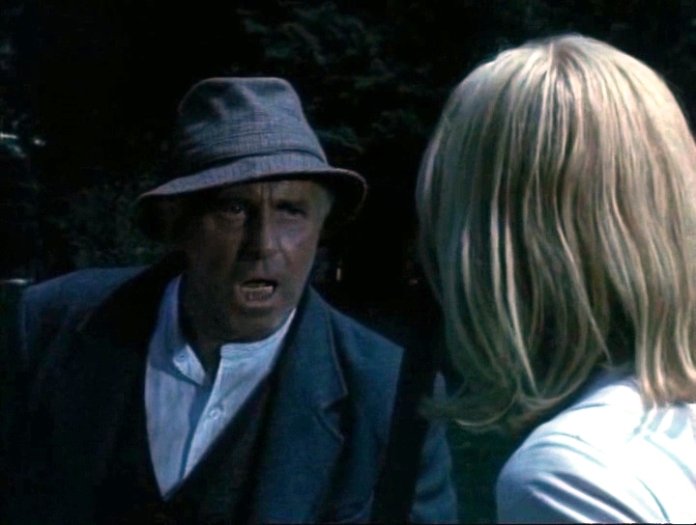 Early scenes threaten a twee Anglican variation on Forbidden Games (1952), and in some ways the narrative works just like a British social problem film of the ‘50s and early ‘60s, many of which Mills starred in, with an eye on the racism inflicted on the Gypsies who have been an indelible part of the rural landscape for centuries, and portraying social exclusion inflicted on outsiders. Brydie’s mother was unmarried, which exacerbates both that woman’s psychological and physical collapse and Brydie’s suspect nature for the town. But in the end, Sky West and Crooked has a quality that feels wrung out of the long pastoral tradition, as the adult drama, infused with an unnerving sense of seething resentments and slow-burning neurosis, subsumes, but doesn’t swamp the innocent perspective of its heroes. As ever with the pastoral style, transformation and discovery must occur beyond the boundaries of civilisation, and Brydie and Sam engage in the gentlest of gentle romances in a beatifically photographed countryside, as the village children race to meet them cupping bouquets of flowers like sprites of the earth.

Mills’s evocation of the village environment, imbued with a patina of god-fearing, William Blakeian perfection stretched precariously over a lurking darkness, is reminiscent of Michael Powell in many regards. Mills doesn’t wield Powell’s cinematic vividness in this first try, but the intelligence of his framings and his maintenance of mood is admirable. The film is also a product of a different time, one concerned with the generation gap and the necessary synthesis of new social order in rejecting old prejudices and meeting an era defined by change, than the one that produced Powell’s A Canterbury Tale or I Know Where I’m Going!, with their heartfelt pleas for reverence for settled ways of life. Likewise, the firm sense of the necessity of a private morality is similar to the stance of another director Mills often worked for, David Lean. Mills’ linkage of environment to that morality is subtler than in Lean’s films, but still discernable. His film anticipates a distinct thematic accord, in far more becalmed and modest terms, with Lean’s Ryan’s Daughter. Mills, however, maintains an edge of low-key ’60s naturalism, with only the lightest frosting of elemental drama.

Interestingly and amusingly, the young people’s travails are offset by a crisis not so much of faith but of purpose on the behalf of Bayldon’s Rev. Moss. He’s depressed about reciting clichés in sermons that are sparsely attended and complains that he’s only wanted to see his fellow villagers safely wedded or interred in the earth. Ironically, he gains his largest audience when the villagers congregate in alarm over the seeming violation of the churchyard’s sanctity by a mob of spiritually bewildered children. Meanwhile, Roibin speaks of his own gods and gives Brydie a pagan totem, a ring made of strands of grass, The finale, in which Moss strives to realise their happy reunion, comes to suggest a variety of interfaith harmony based in a belief in the essential fecundity of the natural landscape. Mills, in his modest way, essays a theme of a new multiculturalism in the British identity that’s become all the more important in the years since, with varieties of faith that affirm rather than contradict each other arrayed against social intolerance and pettiness. 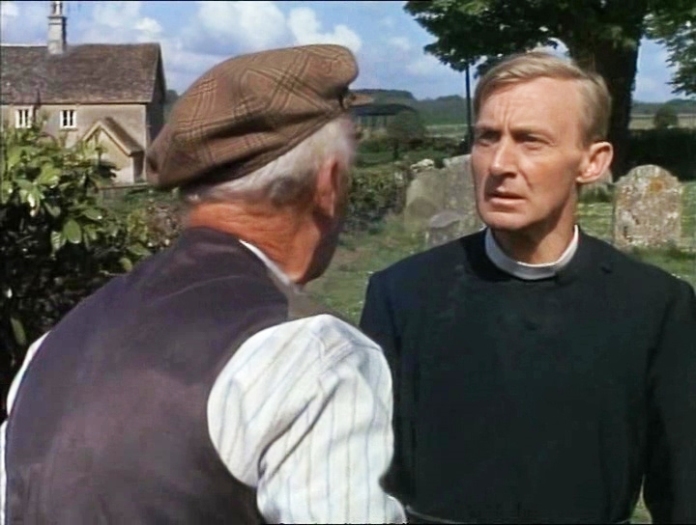 As the film gathers pace, the harbingers of darkness accumulate, and the film’s mood deepens, especially in Brydie’s confrontation with Dacres, who, brandishing the shotgun in his drunken efforts to terrify the girl, becomes the serpent in this particular Eden. He only sends Brydie into a convulsive panic, resulting in her plunging into a swollen stream, in a sequence that makes effectively hysterical use of first-person camerawork: but his act is also a catalyst for smashing the haze that has gripped Brydie’s mind. McShane, having rescued her, ushers her into the simultaneously alien and warm circle of his fellow Gypsies, one played by cult actress Jacqueline Pearce, who in the same year, made her mark in two Hammer horrors (her exotic intensity sits well here). They are alarmed at the trouble she might bring down on their heads.

Some of Roibin’s fellow lads beat the hell out of him when he insists they wait for Brydie after she goes to visit the grave of her mother, who dies in a striking sequence; long ostracised by her fellow village crones, they descend on her home to commiserate with her after Brydie’s disappearance, their faces looming in grotesque distortion as Crosbie frays and then pitches over dead from shock. It’s one of the few strong film roles Crosbie, later one of British TV’s stalwarts, ever had, and she’s entirely convincing. The young McShane is a charismatic screen presence and it’s a wonder it took him several more decades to truly leave a mark on pop culture. Hayley Mills strongly characterises a girl who moves from near-hopeless childishness to adulthood in the course of a traumatic few weeks. Like many child stars, she never really made an effective leap from youth to adult acting, but under her father’s direction she gives a fine performance. The finale offers a well-delayed happy ending in which Moss, alarmed by what will inevitably be Brydie’s institutionalisation now that she’s an orphan, aids her in following Roibin’s tribal markers along the roadside to locate his new encampment and after they’ve been reunited, starting happily back home.