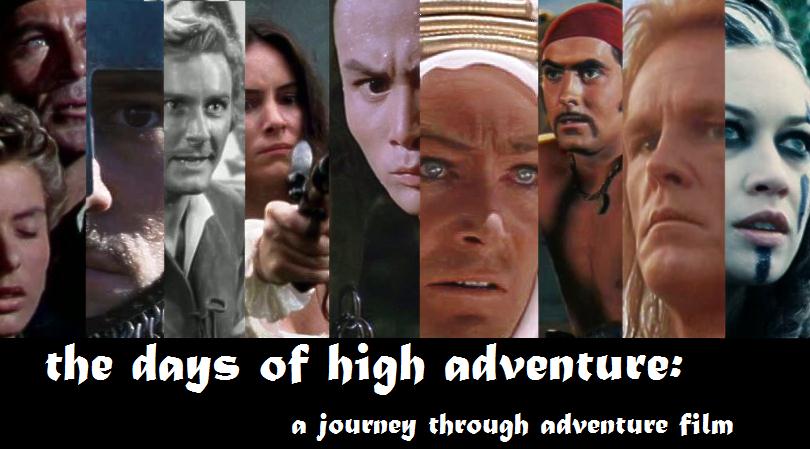 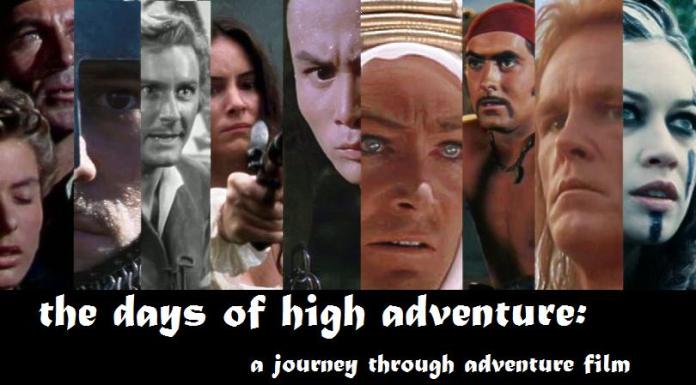 So, what is an adventure film?

Amongst film genres, some are defined by links to a specific time and place, like Westerns, or essential elements and gimmicks, like the futuristic setting or advanced gadgets in science fiction. Others are defined by the emotion they are supposed to inspire: comedies make you laugh, whilst horror and thriller films work as advertised (or try to). Genres are, of course, never impermeable things: Westerns have moved into outer space, comedies can revolve around profound fears, and the adventure film can cross the borders of many other genres.

Today, the adventure film might be considered an adjunct of the action film, but in truth, it’s more the other way around: the action film is the specifically contemporary version of the adventure film, defined by an essential need for kinetic movement and violence, utilising the props of the world as is, an ethic purely of the present tense. The adventure film, on the other hand, is uniquely ancient, possibly the most ancient genre of storytelling in existence, with links to bardic songs, campfire tales, cave paintings. The adventure movie, whilst usually retaining an action element, is defined as much or more by a sense of physical movement not necessarily involving violence, but rather travel and globetrotting, or a sense of having reached and become trapped in the world’s extreme and hostile locales, living on the edge in places of desperate straits. Such adventure tends to take place in settings that old-world, often pretechnological, or at least set in periods where technology is not so tyrannous or has been neutered as a world-ordering force. The adventure can, however, also be futuristic, set in times and worlds where technology restores a level of elasticity to personal freedom and heroism. The adventure film is politically difficult: it can invoke the rise and fall of nations, and stands squarely on the resilience of its heroes and the people they encounter. The meeting of cultures, violence between the two, and also their mutual acceptance and blending, is a constant frontier of the adventure film.

Men are usually the heroes of adventure films, but not always, and if it can be said that the genre is not necessarily one of violence, then some of the hardiest venturers into psychic and physical extremes are women, for example, the cast of William Wellman’s Westward the Women (1951) and the entrapped ambassadors of western culture in John Ford’s 7 Women (1966). The genre can tread the edge of the utterly fantastical, and yet, as with the likes of Henri-Georges Clouzot’s and William Friedkin’s diptych of films based on Georges Arnaud’s novel The Wages of Fear or Mikhail Kalatozov’s depiction of the ill-fated true-life Italia expedition The Red Tent (1969), it can also depict extremely simple, grindingly realistic scenarios. Adventure films are often built around motifs for transmitting knowledge that have roots in human prehistory: the riddle, the map, the quest, the search. Whilst action films are often seen as containing elements that pander to social conservatism, with an emphasis on law enforcers and authoritarian solutions, the adventure film can have links to colonialism and imperialism but just as often can have antiauthoritarian, even radical narratives, often encompassing, sometimes incidentally but also often directly, the establishment (or reestablishment) of legitimate government, or the fight against tyrannies. Such a scenario can be seen as far back as the myth of Jason and the Argonauts, where the hero embarks on his long voyage in order to bring down the usurping tyrant back home, and flows through the adventure swashbucklers of Errol Flynn and the struggles of Indiana Jones and Alistair Maclean’s pulpy heroes against Nazis, or George Lucas’ rebels against the Galactic Empire. The adventure film is also more fundamentally romantic than the action film: indeed, the modern genre has roots in romance, the broad name for all early fiction, and in courtly ballads and poems extolling the knight and lady fair. Saving the damsel, or more rarely but occasionally, the dude in distress is oft a key element of the adventure genre’s ideals.

One reason I’m engaging with this topic is my general frustration with how few great and actual adventure films there are, particularly in the modern pantheon. Recent attempts to revive subgenres like the pirate movie, with the increasingly intolerable Pirates of the Caribbean films, and the find-the-buried-treasure tale, like the National Treasure movies, raked in money but left a bitter aftertaste at their incapacity to develop coherent narratives. Instead, they compiled tropes and gimmicks harvested from a range of predecessors and hurled them onto the screen without even the clear-minded organising principles behind earlier examples of the process, like Raiders of the Lost Ark (1981).

Much of the thunder of both the classic action film and the adventure film has been stolen in the past few years by the superhero flick. Superheroes, by dint of their extraordinary gifts, are able to keep aspects of the classic swashbuckler alive in the age of drones, rockets, armour-piercing bullets, and nuclear weapons. Superheroes certainly have links to the more-than-human heroes of Greek, Jewish, Indian, and Chinese myth, but in being superhuman and barely vulnerable to all but the most absurd dangers, they cannot really channel the sure reality of physical stamina and witticism, the sense of being merely human even whilst contending with terrible forces, necessary for the swashbuckler. Beginning in the early ’50s, with the likes of The Crimson Pirate (1953), the genre became increasingly comic and self-mocking, with some stronger examples emerging from France, like Philippe de Broca’s giddy duo of Cartouche (1962) and That Man from Rio (1964), and Louis Malle’s Viva Maria! (1965); in Britain, Richard Lester’s series of seriocomic deconstructions of the form in the mid ’70s managed to both critique and satirise the genre whilst still engaging it on its own terms.

A question then arises: is the adventure film fundamentally just a mode for playful divertissement, or can it be more serious than is often allowed? Action films are often caricatured as Pavlovian, anti-intellectual fodder for the mindless masses, not without reason, but also often in ignorance of the deft balance of the aesthetic and mechanical ingenuity necessary to make the genre work. Adventure films require similar gifts, and yet it can also be said that the adventure film stands at odds with the action film in that it can more easily be thoughtful, even philosophical, as some advanced examples like Richard Brooks’ Lord Jim (1965), Akira Kurosawa’s Seven Samurai (1954), or Peter Weir’s Master and Commander: The Far Side of the World (2003) testify. Adventurers can be intellectual, scholarly, like Indiana Jones or Sir Richard Burton in Mountains of the Moon (1989), or meditative or even self-destructive: Werner Herzog’s Aguirre, The Wrath of God (1972) and Fitzcarraldo (1983) and John Boorman’s Deliverance (1972) and Zardoz (1974) both push the genre to its physical limits whilst also engaging its deepest meanings in terms of both the psyche and the world where Conradian heroes disintegrate in trying to face down the primal, and civilisation becomes a death-dream from which the adventurers need to be awakened.

Many war films cross the line into adventure film territory: The Guns of Navarone (1961) and The Great Escape (1963) take place in World War II, and yet they elide the usual brutal realism of the combat genre in presenting neo-swashbucklers, and Apocalypse Now (1979) grafts the Conradian adventure onto a wartime setting. Westerns, too, often cross paths with the genre, particularly the likes of Raoul Walsh’s The Big Trail (1930), Sam Peckinpah’s Major Dundee (1965) and The Wild Bunch (1969), and Sergio Leone’s The Good, The Bad, and The Ugly (1966): these films involve a scope of action and character beyond the familiar parameters of the horse opera.

And what about films from cultures beyond Europe and the US? The likes of Atarnarjuat (2001), the first Inuit cinema epic, certainly tell adventure stories, and, indeed, document the sorts of folk myth from which the genre evolved. Asian cinema’s classic genres of wu xia and jidai geki are tantalisingly close in nature to the swashbuckler, and though defined by certain specific rules of structure, the kind of action they depict, and their settings, Tsui Hark, Kihachi Okamoto, Akira Kurosawa and so many others have pushed into the realm of the adventure genre.

Can adventure films even be chamber pieces, or purely psychological? The likes of Christopher Nolan’s Inception (2010), Satoshi Kon’s Paprika (2006), Joseph Ruben’s Dreamscape (1984), and Paul Verhoeven’s Total Recall (1990) all take place in their hero’s headspaces. But how about the psychedelically derived adventure, as in Roger Corman’s The Trip (1967)? Dennis Hopper, who cowrote that film, was a kind of adventure filmmaker, expanding on the notion through his definitive hipster odysseys Easy Rider (1969) and The Last Movie (1971).  How about sexual adventures? Philip Kaufman’s Henry & June (1990) described itself as “A True Adventure More Erotic Than Any Fantasy,” and, indeed, erotica has always had a certain structural affinity with the adventure tale, with wandering, assailed, curious individuals delving into realms far beyond the normal. So what about Emmanuelle, or Deep Throat? Okay, now I’m just teasing, but you get my drift.

In any event, this series is going to look at both iconic and some less well-known works of adventure cinema: I am open to requests and petitions for works to be covered, and I’ll be interested in whatever suggestions you have. Please keep in mind that I won’t be dealing with films Marilyn or I have already written about here or at This Island Rod.

Now, hold onto your hats. We’re on our way.

The series so far:

Raiders of the Lost Ark

Farewell to the King

White Sun of the Desert

12 thoughts on “The Days of High Adventure: A Journey through Adventure Film”