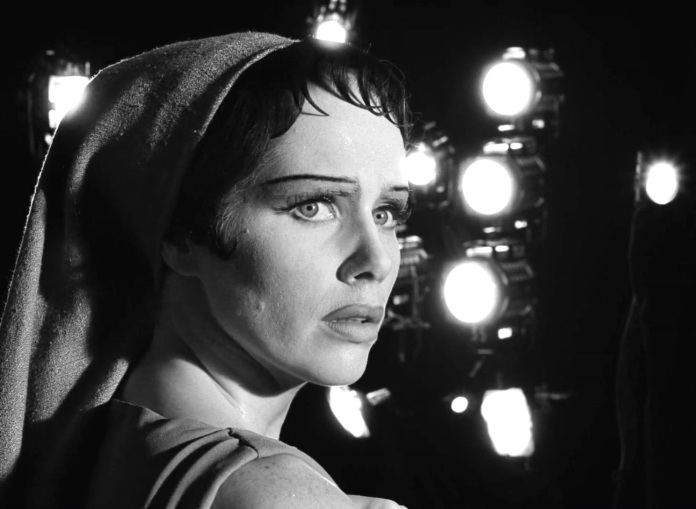 Ingmar Bergman’s death last week was an event that swept with unusual speed and prominence through the news services. Yet, the bleakly amusing thing about many of the commentaries on his passing was the statement, or confession, by many critics of his rapidly fading importance. So-called young film fans apparently asked in their droves, “Ingmar who?” Not that Bergman’s serious works should be regarded without a healthy dash of skepticism, either. A review of Hour of the Wolf (1968) in the Encyclopedia of the Horror Film, pithily summarized Bergman’s oeuvre: “As (nearly) always, Bergman’s film is less about ‘great existential problems’ than about people unable to see further than the ends of their own noses who have all the time in the world to concentrate on their favourite (and only) world view.” Bergman stumbled into a fortunate situation that very few other directors of any stripe have ever achieved—he was allowed almost complete artistic freedom of expression for nearly 30 years. He trod water more than few times in that period looking for something new to say. But his best, most galvanising films, are deep in their cultural scope as well as their visceral emotional impact.

Persona, Hour of the Wolf, and Shame (1969) form a loose trilogy analysing horror, as Conrad would understand it, though containing quite a bit of horror as Roger Corman would understand it, too. They chart a cycle of thought and reaction to the Atomic Age, of desire for complete retreat within the artistic psyche, the terrors within that psyche, and the effect of finally being unshelled and destroyed by a violent world. Each film centers on an artist who has retreated from the world. In Persona, an actress, Elisabeth Vogler (Liv Ullman, in her debut role for Bergman) goes mute, seemingly as a reaction to a cruel, existential dread evoked by images of violent death, and is placed in the care of a nurse, Alma (Bibi Andersson). In Hour of the Wolf, a painter, Borg (Max Von Sydow) and his wife (Ullman) live in a remote cabin on an island, where Borg seems to go mad, and the wife cannot tell if the mad things she sees are real or merely a shared delusion. In Shame, Von Sydow and Ullman play married musicians who find their womb of privacy shattered by a real war erupting around their ears.

Persona could be Bergman’s most aggressively abstract film. Essentially, nothing happens, and yet a lot seems to go on. Elisabeth is stricken by her mute terror whilst giving a performance of Electra, an archetypal role ripe with meaning—a woman who kills her mother and runs from the avenging Furies—and disengages from the world. Whilst in a nursing home, she watches with utter desolation, whilst cowering in the corner, footage from Vietnam, including the famous image of a Buddhist Monk immolating himself as a protest. Her psychiatrist (Margaretha Krook) believes she’s chosen silence as a kind of a new role—a guise to be worn in until her crisis resolves, and leaves her to the care of Alma, a very normal young woman, carelessly chatty, impressed by having a famous woman as her charge.

Alma and Elisabeth move into the doctor’s summer house. Here, Alma learns, or rather fails to learn, that Elisabeth’s enigmatic silence offers a mirror that can seem both infinitely open and endlessly malevolent; Alma can write anything she wants onto eternally attentive features, but finds they sink like stones in a pool. Bergman fills the film with framings that feature reflections in mirrors and lakes. Alma gleefully confesses all her secrets to Elisabeth—her troubled relationships and a beachside sexual escapade with her best friend and an anonymous young man that resulted in her boyfriend Henryk getting her an abortion. Elisabeth seems to listen with compassion, and Alma falls so deeply in their cocoon of confidence she almost kisses her. Moments of sexually charged intensity are rife between them. 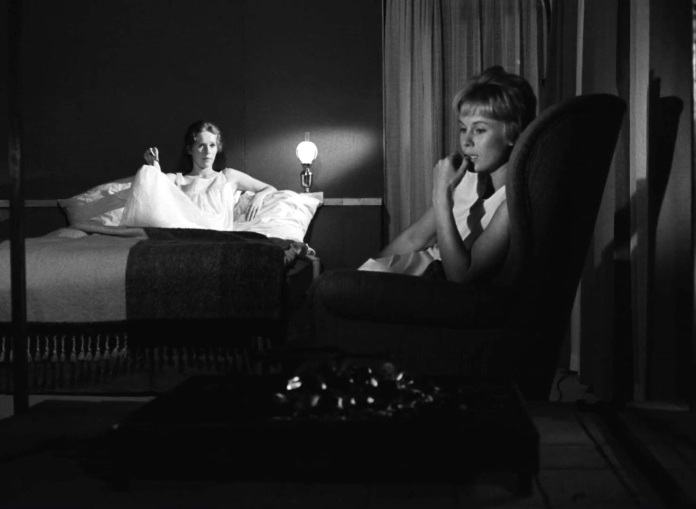 One night, Elisabeth comes into Alma’s room and embraces her, caressing her hair as they gaze at themselves in a mirror. The next day, however, Alma isn’t sure if it’s a memory or a dream. Delivering mail for Elisabeth, Alma sneaks a read of her condescending description of their relationship in a letter to the psychiatrist, and smoulders with resentment. She leaves a shard of glass for Elisabeth to walk on. Elisabeth does so, and their subsequent exchange of looks confirms its deliberation—whereupon the film breaks down briefly, a hole burning in the celluloid, with a short shard of a silent comic film, some of which was also shown at the start along with images of a film production beginning.

When the narrative returns, Sven Nykvist’s preternaturally sharp cinematography wanders in and out of focus as the women walk through the house. A chasm has been jumped from relationship to psychodrama. Alma alternates between pleading for forgiveness with Elisabeth and physically assaulting her. In the night, Alma awakens from a terrible dream to the sound of someone calling Elisabeth’s name; this proves to be Elisabeth’s husband (Günnar Bjornstrand) who’s blind, and thinks Alma is Elisabeth. Elisabeth seems to encourage Alma to continue the ruse, to the point of sleeping with him. When she finds Elisabeth studying a photo of her crippled son, Alma settles down in front of her coldly, mercilessly spinning out an incisive account of why Elisabeth had the child and her reaction to it, which causes Elisabeth to writhe and flinch. The same scene is repeated from the opposite angle, this time fixed on Alma’s face, until, in a grotesquely powerful moment in which the two women’s faces are joined by a split-screen effect, locked in a kind of mutant immobility. With her direct assault on Elisabeth’s psyche, Alma’s fallen right into the same rabbit hole. 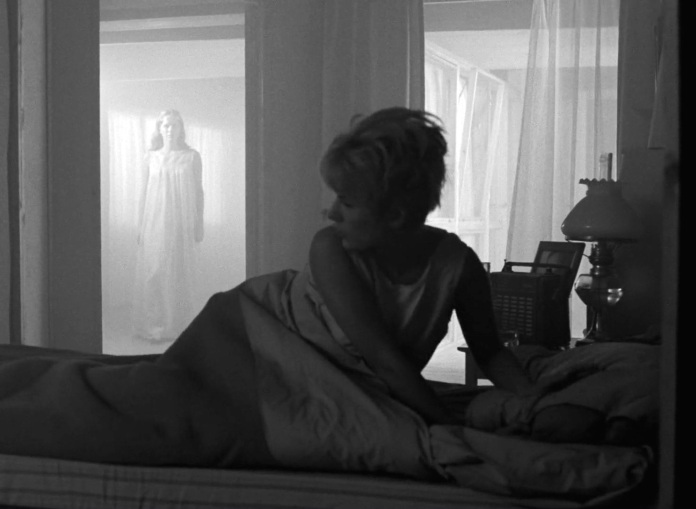 The remaining narrative is impossible to judge. Alma seems to abuse Elisabeth further, except that she speaks about playing roles, and it seems perhaps she and Alma have swapped bodies. Or has Alma stolen Elisabeth’s power? Alma tears her arm with her nails, and Elisabeth sucks the welling blood from it, whereupon Alma repeatedly beats the cowering woman. Bergman intercuts between the two women packing to leave, but only Alma actually gets on board the bus to go. The film breaks down again, returning to boom cranes, cameras, and a fading arc light. The impression of Persona is its meaning, and its impression is an evocation of dread of many things: sexuality, artistic barrenness, war, the pains of interpersonal communication. This last dread Bergman always insisted was the key to his films. Bergman weaves a tapestry that combines many influences and exports just as many. 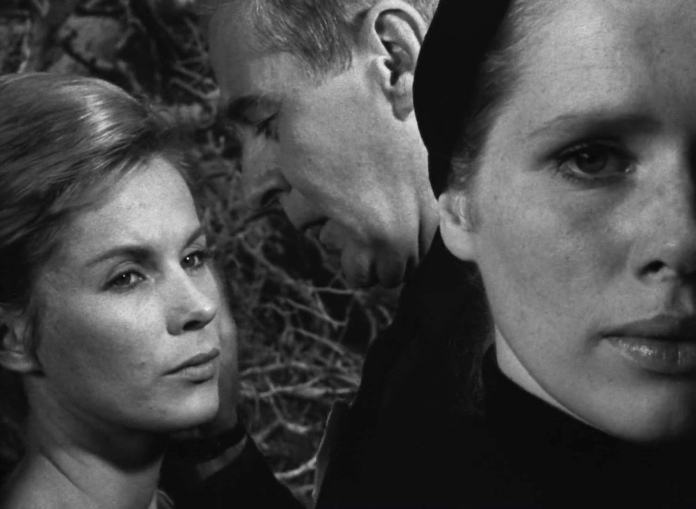 There are dashes of several Scandinavian masters’ influences: the erotic-horror expressionism of artist Gustav Munch, the psychodynamics of playwrights August Strindberg and Henrik Ibsen, the films of Carl Dreyer (whose Vampyr and Day of Wrath anticipate several Bergman works). Bergman was also an avid fan of gothic fiction and filmmaking, and Persona tracks like some of Poe’s crazier stories, like Morella or The Tomb of Ligeia, where a couple try so desperately to know each other, to join in the deepest, most spiritual sense, that it passes well beyond sexuality into obsessive mutual destruction. The theme of psyches intertwining would be furthered in Hour of the Wolf, which explores the idea that perhaps in a marriage, couples begin not merely to look like each other, as the old canard goes, but also share the same thoughts, the same madness; in fact, Ullman’s character in that film cannot decide afterwards if the gothic terrors she has seen truly haunted her and her husband or were just her involving herself in her crazed husband’s delusions. In Persona, the entwining minds have the aspect of a sick love affair. 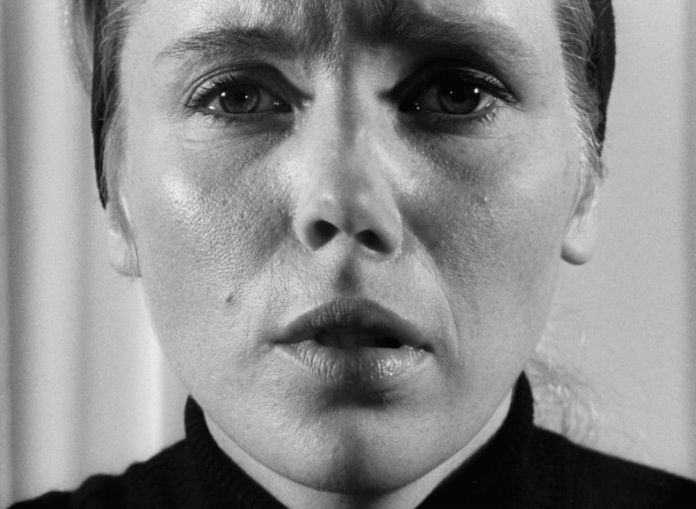 The dread is thus highly sexualised, though nothing sexy is seen. The one heterosexual relationship in the film, the marriage between Elisabeth and Mr. Vogler, is a match of deficiencies. He is blind, and she has become mute. Each embodies a lack, not complementary, but instead causing permanent alienation, a complete divorcement from communication. A possible new human connection is found in the homosexual attraction of Alma and Elisabeth, except this is little more than glorified narcissism, a search to bathe in the reflection of a more perfect version of the self. The antiseptic chill of Persona is pervasive as he investigates lust as an aspect of emotional need. The relationship between Alma and Elisabeth anticipates a modern fascination with the celebrity cult. Alma wants to find herself in the acting icon, and Elisabeth can absorb anything she wants through the subservient/idolising ordinary girl.

Persona evokes anxieties about artistic responsibility and effort; when Elisabeth actually stoops to sucking Alma’s blood, it seems an ultimate fulfilment of an artist’s creed. Bergman was perhaps prophetic. Years later, Ullman would refuse to make any more films with her ex-lover because she was sick of having her psyche scoured in the process of making his art. Bergman became one of the greatest of cinematic expressionists, that is, he knew how to use image and sound in such a way as to drag an overwhelmingly physical response, usually unsettling, out of his audience. He knew how, with his camera, and even more so, his editing, (kudos to Ulla Ryghe, the cutter on this picture), to mould cinematic space exactly to his needs. Bergman’s overpoweringly weird mise-en-scene commands attention, and in this regard, Bergman is second to none, even David Lynch, a major acolyte. You’re never entirely too sure of what you’re seeing or hearing in Persona, a film whose effects are as spare Swedish modern furniture. 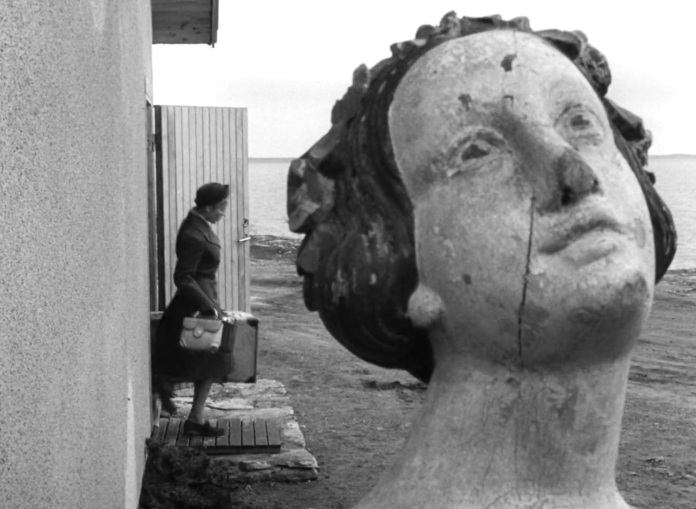 Bergman’s stringent, unflinching attitude towards the toughest subjects demanded a fair amount of nerve of him and his audiences. As a man, he was nothing like the stern shaman that seemed to make these films, but a fiery, plain-spoken, sensual workaholic who remained haunted by his formative years. It was once said of Thomas Mann that he was a great novelist not because he tried to drum up brilliant answers, but because he asked the most interesting questions. This is perhaps, most fundamentally, what all great artists do, and it can be said of Bergman as a filmmaker. Even at their most opaque and peculiar, Bergman’s films always have the tone of urgent questioning. The sheer balls of his examinations, mixed with his peerless creative sense of cinema, mean their questions will be unnerving and problematic, affecting and hypnotic, for a long time to come.