Before his sad death at age 52 from AIDS in the early ’90s Derek Jarman, had established himself as one of British cinema’s true enfants terrible. He helped define gay cinema, maintained an aesthetic guerrilla war against the Thatcher government of the ’80s, and claimed a corner of demanding, semi-abstract narrative filmmaking that took up challenges laid down by the likes of Ken Russell, Nicholas Roeg, Rainer Werner Fassbinder, and Pier Paolo Pasolini, but dragged them off in his own direction. Sebastiane, his first film, codirected with Paul Humfress, ventured into new realms of lucid, unveiled, homoerotic image-making, conflated with an effervescent intellectual blend of classicist humour and spiritual seriousness.

Unlike the odious Peter Greenaway, with whom Jarman shared dominance of the British arthouse scene in the ’80s, Jarman’s cinema was urgent and personal in its provocations and learned references, angrily ransacking the massed detritus of the European cultural tradition for forms and voices through with to articulate his peculiar aesthetic: following Sebastiane, his subjects included Shakespeare’s The Tempest, Marlowe’s Edward II, Caravaggio, and Ludwig Wittgenstein. Based around the life and martyrdom of St. Sebastian, Humfress’ and Jarman’s film aggressively appropriates the barely veiled rendering of the saint as a sadomasochistic erotic object in Renaissance painting for their own ends, reconstructing him as a gay icon. Sebastiane has a claim to a certain distinction for being the first film made entirely in Latin, even going so far as to have a translator render patches of the dialogue in the vulgar form for deeper authenticity. As such, it stands as an influence—or at least prefiguration—of a film like Mel Gibson’s similarly antiquarian, S&M-hued religious work The Passion of the Christ (2003), a film motivated by polar opposite moral and philosophical urges.

Sebastiane actually follows a very familiar narrative line for religious epics, depicting the attempt of a pagan Roman to browbeat his rapturous Christian love object into surrendering his or her body and thus, implicitly, his or her ideals; in the likes of The Sign of the Cross (1932) and Quo Vadis? (1951), the love object was female. Here the love object is Sebastian (Leonardo Treviglio), and the film is closer to the eroticised beefcake-suffering of Charlton Heston in Ben-Hur (1959). In spite of the feeling of authenticity in the photography and the use of Latin dialogue, strict realism is a long way from Jarman’s mind, and this is soon apparent in the anachronistic touches that dot the film. 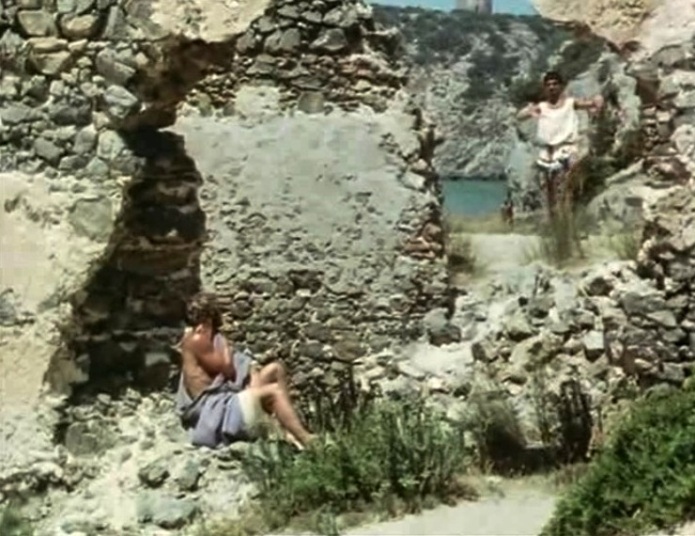 Sebastian is a favourite of Emperor Diocletian (Robert Medley) and captain of his personal guard. The opening sequence depicts Diocletian’s court celebrating the birth of the sun in the time of his jubilee in a scene of Felliniesque excess. Male dancers sporting huge fake genitals tied to their groins dance around a man painted as a caricature of femininity, who is spread-eagle on the floor and mock group-raped, fake jism squirting on him, in a droll parody of Roman phallocratic sexuality and politics. It’s a stylised representation of what follows. Roman high society sprawls in decadence, suggested through a punkish mix of historically accurate tropes and glam rock pizzazz that includes the reigning whore supreme Mammea Morgana (played by punk emblem Jordan). Diocletian loses his temper with one of his toy-boys who is weeping for a man sentenced to death for one of the conflagrations started by Christian insurgents in Rome: the Emperor has the boy strangled. When Sebastian tries to intercede, Diocletian strips him of his rank and exiles him. The rest of the film takes place in Sardinian locations, standing in for the unnamed desert outpost to which Sebastian is exiled. Maximus (Neil Kennedy), also present in at the festivities, is posted to the same locale, and reports this directly to the audience. 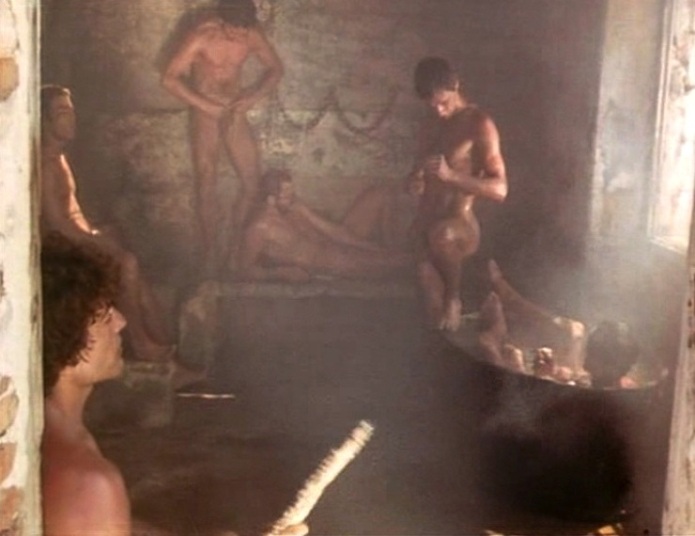 In that hot, dry, unpopulated part of the Empire, Sebastian makes it clear that he’s become a Christian, and won’t train for fighting anymore with the other men. The commandant Severus (Barney James) abuses and humiliates him, a regimen that worsens when Sebastian won’t let Severus screw him, to demonstrate his contempt for browbeating power. The introductory scene has already made clear that this refusal to submit, to allow access to the body and, more importantly, to the private conscience, infuriates the representative of the dying regime. This theme, of the powerful figure that forces obedience and conformity, runs side by side with the religious and sexual themes; those three basic concepts—sex, power, spirit—constantly shade into each other but occasionally are shocked into polarisation. 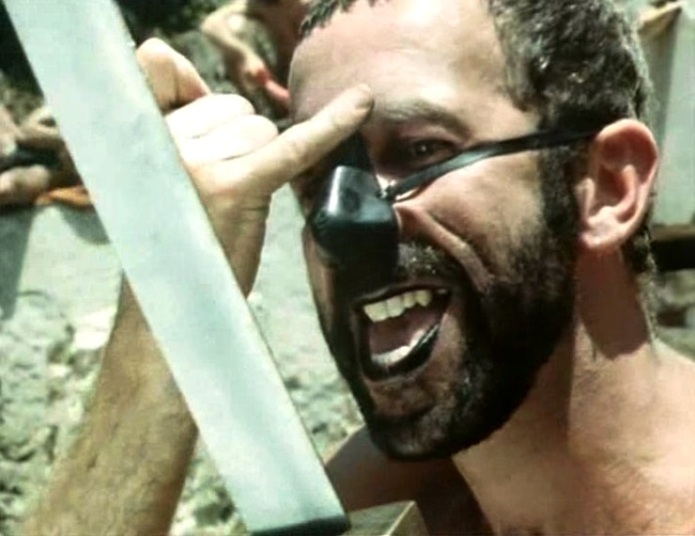 Amidst the small band of soldiers, the leading personality is Maximus, a dirty-minded git with a false nose strapped to his face and a false penis sometimes strapped to his groin. He has a relentless hunger for amusement and dirty by-play, whilst the other bored, horny soldiers turn to each other for gratification after looking at dirty pictures. One of the soldiers, Justin (Richard Warwick), empathises with Sebastian’s plight and tries to understand his strange idealism, which, as Sebastian meditates on his own, seems partly composed of narcissism—making his prayers whilst gazing at himself in the water—and lust, as he wishes to be embraced by Jesus. Sebastian communes with his rugged landscape and prays, conflating the sun god Phoebus Apollo, whom Sebastian used to worship, with his version of Jesus. So the searing touch of the sun, of which Sebastian gets plenty when Severus has him staked to the ground as a punishment, is only more ecstatic bliss for him. 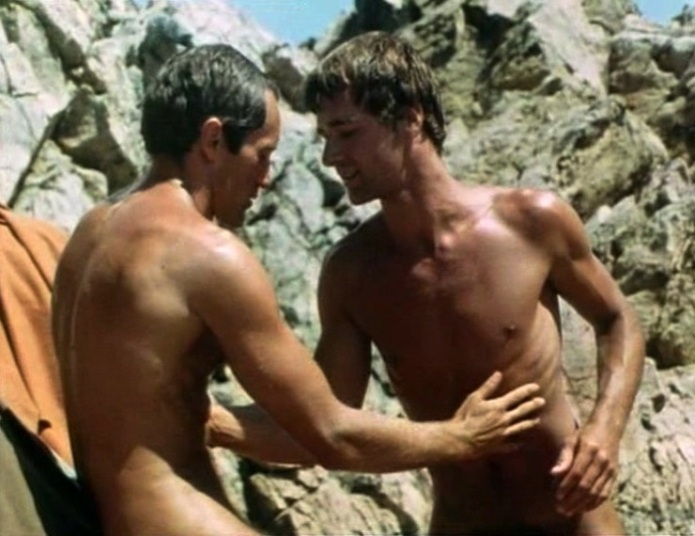 Like many beginner filmmakers with artistic ambition as well as an urgent intellectual position to articulate, Jarman—and it’s hard to doubt Jarman was the driving cinematic force here—gives into the tendency to indulge longeurs and pound select ideas into the ground. Early in the film, Jarman presents a beauteous sequence in which Sebastian awakens early in the morning and washes himself down in the morning sun, enjoying and idolising the physical sensations which are part and parcel with his spiritual understanding. Severus watches him with a predatory intent and fascination with a species of man beyond his experience. Jarman shoots the male body like he’s the first person to discover it, and in a manner of speaking, he is: he doesn’t just eroticise it, but also renders it as a universe unto itself.

But on occasion, Sebastiane starts to resemble a motion picture edition of a Sports Illustrated swimsuit issue, except with sporty young guys frolicking and wrestling in the water rather than girls, lounging about in the sand, and cleaning their sweaty bodies in a Roman bath. The actors are barely clothed through much of the film, as Jarman said they didn’t have enough money for costumes. A lengthy sequence with two of the soldiers in an initially romantic clinch that gives way to them wrestling in the water, goes on forever, and though it clearly had political heft in 1976—Sebastiane pissed off people exactly as it was supposed to, though there are no literal sex acts in the film—it seems like soft-core self-indulgence now. And yet the evident erotic enjoyment is imbued with a hint of the alien, anticipating Claire Denis and David Cronenberg, as Jarman communicates a sense of the body as a thing of mystery and beauty in his languorous, slow-motion scenes of muscles flowing under skin with ineluctable beauty.

The body is a war zone throughout the film, strong and lustrous, yet also disturbingly vulnerable, easily damaged, abused, and controlled; the only riposte is the untouchable and inviolable soul, which is why Sebastian crushingly rejects Severus late in the film when he tells him he can have his body but never have his true, inner self. The scene in Diocletian’s court establishes the atmosphere of physical ferocity, where murder is casual and the entertainment a plain parable for rape and exploitation. Jarman jams his camera in the gruesomely made-up face of the “female” dancer writhing under faux-ejaculate, and the bloodied mouths of slaves as one strangles the other in a dizzying image of animalistic humanity. The Emperor’s exile of Sebastian is the necessary gambit to his assassination, and yet the remote location and the vagueness of their mission causes the men to feel the weight of whatever angst they suffer, from Maximus’s basic desire to get back to Rome and hole up with a prostitute, through to Severus’ inability to obtain his obsession, whilst Sebastian finds the path to his destiny through unimaginable cruelty. Jarman sets up dichotomies—abusive strength, religious fervour, Roman decadence—but doesn’t easily separate them. The basic joke is easy enough to grasp: the Christian in this context is the outcast, aberrant, abused figure, mocked for effeminacy and arrogance, not the homosexual. Jarman seems to be trying to depict a moment in time in which humanity evolved from a purely physical creature into something deeper and better, but also less coherent and natural.

Jarman doesn’t make the assailed Christian emblematic of a desexualised, denaturalised ideal about to supplant the free and easy paganism, however. Sebastian’s idealisation shares a certain homoerotic tone with John Donne’s Fourteenth Holy Sonnet (“Except you enthrall me, never shall be free/Nor ever chaste, except you ravish me.”), envisioning God as an invasive, beauteous, erotic force. Brian Eno’s eerie, electronic score pulsates throughout with spacey beauty, underscoring scenes alternately banal, bizarre, and violent, constantly suggesting weird, transformative potential. The images seem engaged in a perpetual search for signs of transcendence only to be found in a surrender to the utterly physical, a loss of distinction between world and self. Throughout the film flows a brand of humour blending poles of donnish esoterica and Carry On-style scatology, particularly when the soldiers stage death battles between beetles they name Messalina, Boadacea, Sappho, and Dido, imagining them in a mass lesbian rape, and those passages of vulgar Latin proliferate in the soldiers’ excited sexual language. At one point Sebastian demonstrates for Justin a dance he used to do for the sun god in Rome, which Maximus sees and satirised feverishly before the other soldiers as he pretends to make love to a pig. Kennedy’s earthy performance dominates the film, playing Maximus as a human being with no high ideals, violently contrasting Sebastian’s elevated aspirations, and appointing himself the chief persecutor of the Christian until Severus orders him to stop. 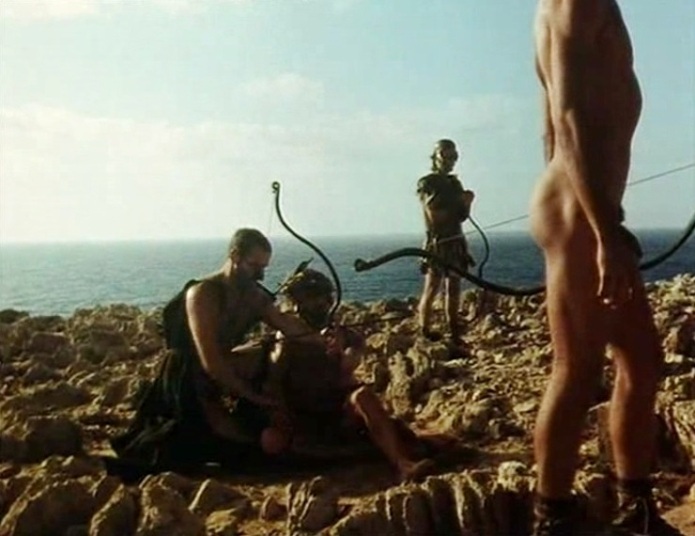 As its story unfolds, Sebastiane displays surprising similarities to the likes of Platoon (1986): amongst its many aspects, one that emerges strongly is its portraiture of the volatility of soldiers, beset with rampant sensual hunger while trapped in an existentially ambiguous exile in distant territory. Perhaps the likeness isn’t coincidental, as Jarman surely had the Vietnam War and the soldiers who fought it on his mind, as well as any regimen of forced social normalisation. As the film entwines sexual, political, and spiritual anxiety, cranking up on virtually subliminal levels, the casual sex that some of the soldiers indulge contrasts Severus’ building hysteria in his need to dominate Sebastian and force his surrender. He has Maximus and the others snatch and beat Justin to a pulp, and Sebastian dragged to Severus’s cell where he plans to rape him.

Instead, Severus only reaps his own humiliation, and so, as in many a horror movie, erotic unease is deflected into physical destruction, as this finally makes Severus decide to have Sebastian killed. In the glare of day on a rocky plain, Sebastian is tied to a pole, where the soldiers, several stark naked, riddle him with arrows. Even the bloodied and barely conscious Justin is manipulated into firing a bolt. Sebastian’s martyrdom sees the ironic fulfilment of his desire to physical communion with his god and of Severus’ desire to penetrate him in a welter of blood. In a point-of-view shot from Sebastian on his pole, the world is suddenly rendered in the distortions of a fish-eye lens, inverting space and changing the devastated plain and his torturers into a permeably false reality. It’s one of the most grotesquely beautiful scenes ever shot, and galvanises Sebastiane’s final haunting effect.