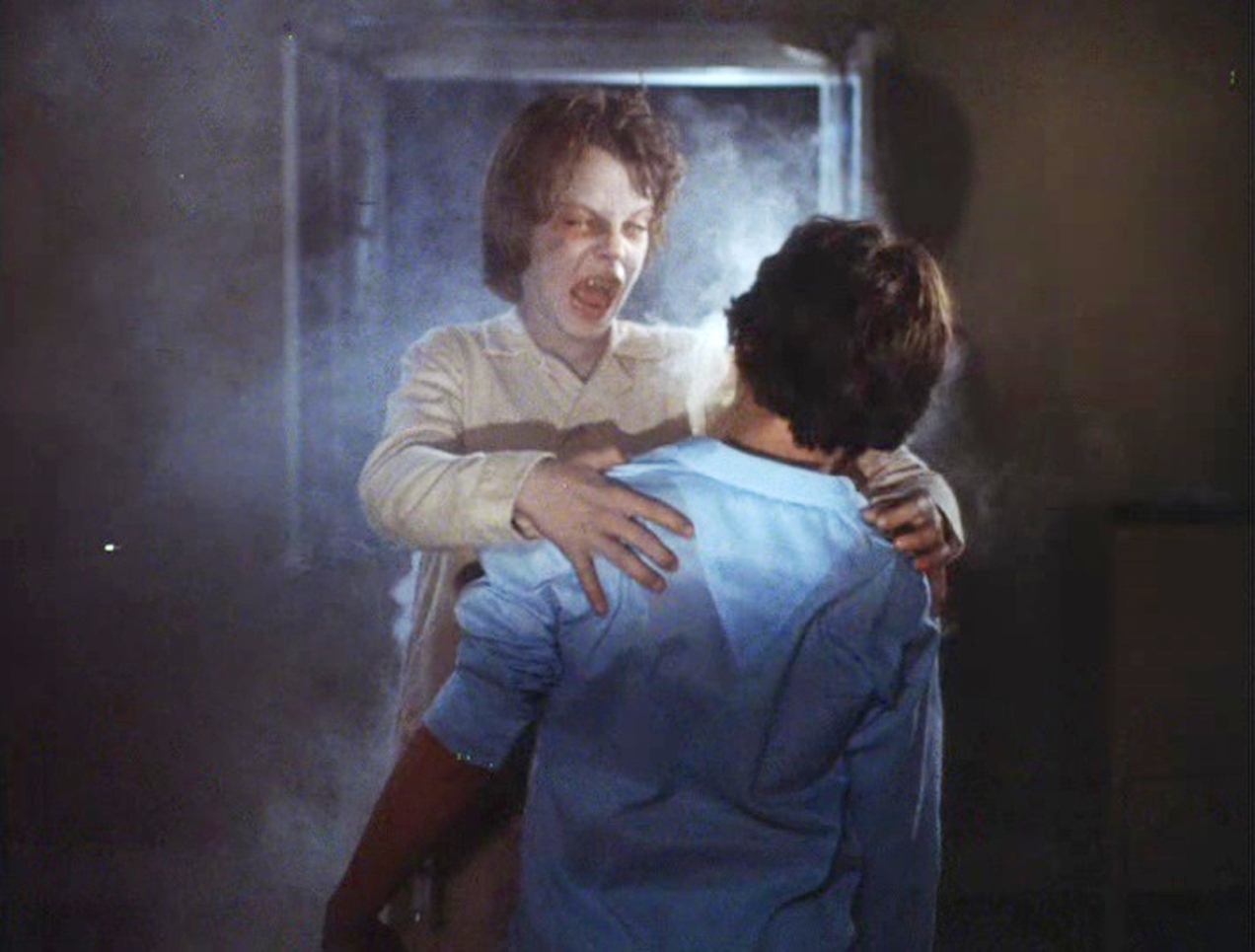 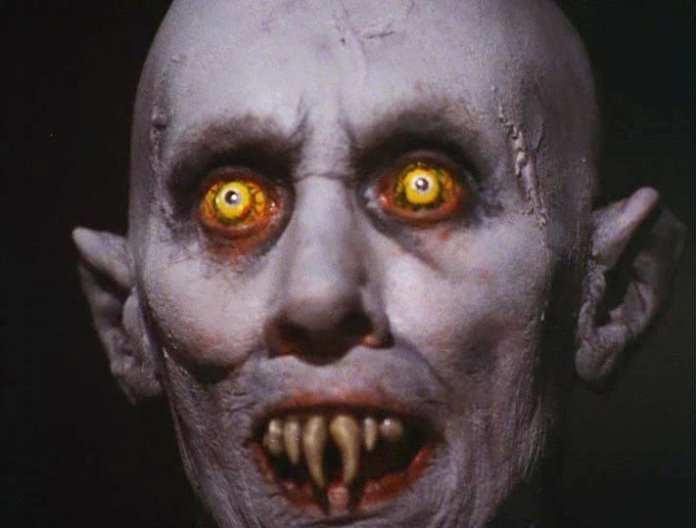 When I was a very small boy, no more than four or five, a TV station advertised this miniseries using the unusual touch of excerpting nearly a whole scene, one in which the monstrous vampire Barlow (Reggie Nalder) erupts into a kitchen table conclave of a teenager, Mark Petrie (Lance Kerwin), his parents (Joshua Bryant and Barbara Babcock), and their priest (James Gallery), promptly murdering both parents. For a kid, this was raw stuff, and I freaked out, causing my father to order me out of the room if there was ever a sign of it coming on again. It’s still a startling, unnerving scene; Hooper, who made beautifully nasty hash out of family rituals in The Texas Chain Saw Massacre (1974), pulled out all stops in showing evil literally erupt into a middle class home to consume the nuclear family and all their social safeguards. 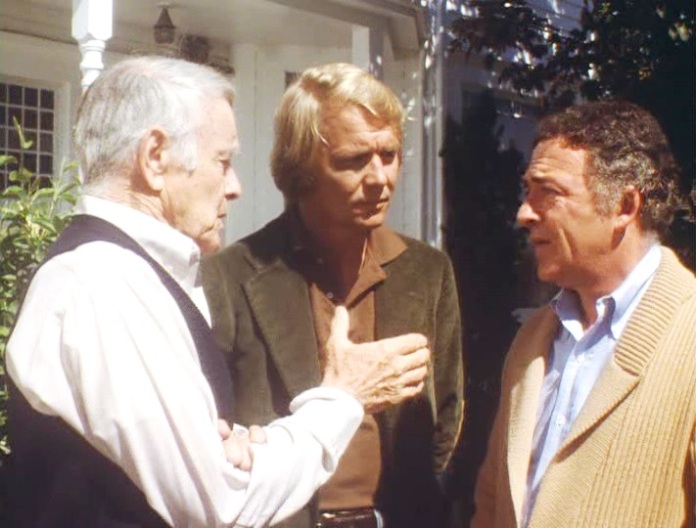 Salem’s Lot is the black sheep of the first wave of Stephen King adaptations. Unlike De Palma’s Carrie (1976), Kubrick’s The Shining (1981), and even Carpenter’s Christine (1983), Salem’s Lot had the disadvantage of being a made-for-TV production with the familiar rough edges of such efforts at the time—hurried lighting and camera effects perforated by cheesy televisual touches, like freeze frames and blackout cliffhangers created to make room for the ad breaks. But Salem’s Lot was made by a director hip to King’s essential aesthetic of melding gothic canards with a sense of the passion and cruelty inherent in everyday life in dreary small towns and suburbs, and how they provide sounding boards for explosions of more expansive evil and concomitant good. 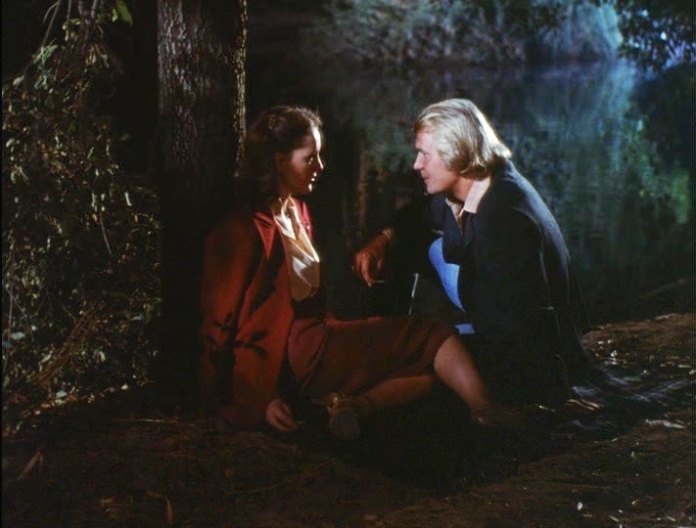 Vampire movies these days seem to have been exhausted by the souped-up idiocy of the Blade movies and Van Helsing, which stripped away any hint of loathsome dread (This was written before I first heard of the Twilight franchise, which concluded this debasement — Rod). Salem’s Lot, on the other hand, employs generic clichés wittily. There’s the old haunted house on the hill —the Marston House—shadowy enclave of the malevolent memory and totem of fascination for local, imaginative youth. Recently bought by smooth, saturnine émigré Mr. Straker (James Mason), who’s opening an antique store in ‘Salem’s Lot, pop. 2013,” in rural New England (of course), the Marston House was once the scene of suicides and paedophilic murders. The house lurks oppressively in the mind of recently returned novelist Ben Mears (David Soul), who moved out of the town at 10 years of age, and has now returned to write a story inspired by the legend of the Marston House. Ben’s sure that the Marston House has a quality of radiating evil that attracts evil people, which has him pondering both the nature of Straker and his unseen partner Barlow, as well as his own. 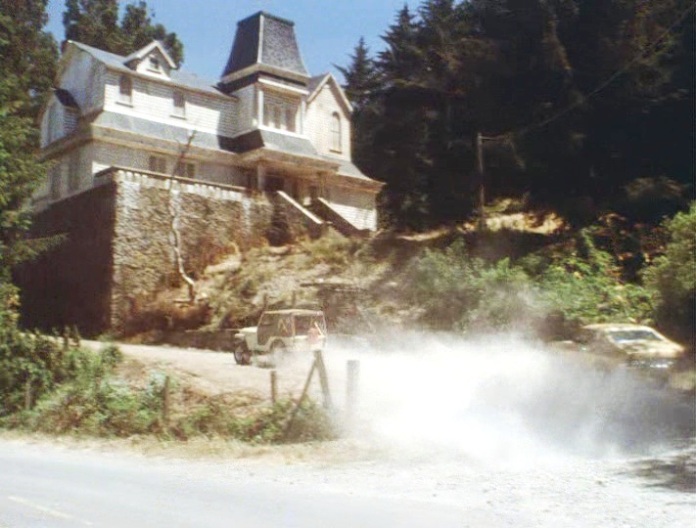 Ben makes friends (and enemies) quickly, coming into contact with his old teacher Jason Berk (Lew Ayres); Susan Norton (Bonnie Bedelia), a bookish, lovelorn, “semi-liberated” woman between life phases; her genial doctor father (Ed Flanders); and a younger version of himself, in the person of horror-movie obsessed Mark. Weird stuff starts to happen. Two dimwits are hired to pick up a crate imported by Straker, which radiates intense cold and seems to sneak up on them in the back of the truck. They’re supposed to place the crate in the Marston House basement and padlock the house. They do the former, but run away before doing the latter. Meanwhile, two brothers, Danny and Ralphie Glick (Brad Savage and Ronnie Scribner), friends of Mark’s, are assaulted whilst heading home in the woods. Straker returns to the Marston House with one of them bundled up and prepared as a snack, only to find that whatever was inside the crate has busted loose. This was, of course, the monstrous Barlow, a Germanic vampire who moves from small town to small town, consuming all and moving on; soon, vampirism is spreading at an exponential rate through the town, eating up the good and the bad, the bright, brave, and stupid. 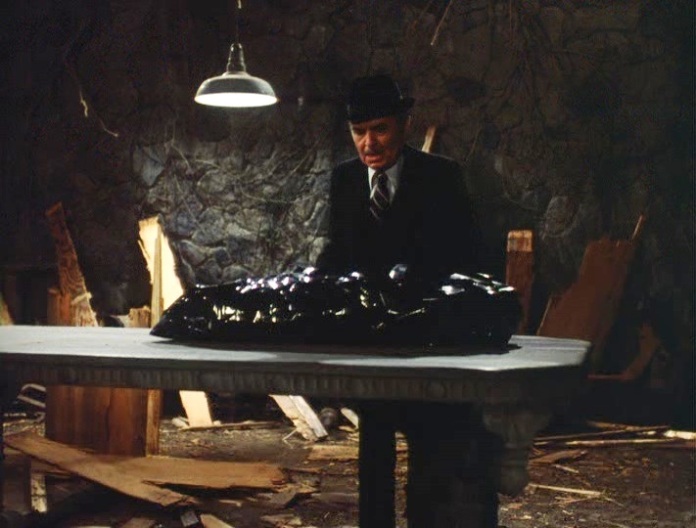 King’s oeuvre has obvious roots in the works of writers like Shirley Jackson and H.P. Lovecraft, both masters of the subgenre of New England horror that grafts Old World obsessions onto New World shores, and in 1950s monster movies like Invasion of the Body Snatchers (1956) and The Blob (1958) in which the friendly night of American suburbia becomes evil-riddled and threatening. Most of the singular aspects of King’s imaginative appeal that made him the premier genre novelist of recent times are present. It’s easy to see the appeal he has for adolescents of all ages in contrasting oppressive everyday life, including acts of commonplace thuggery—here, in drunken ex-con truck driver Cully (George Dzundza) beating up his tarty wife (Julie Cobb) for cheating on him with her sleazy realtor boss (Fred Willard), or Susan’s ex-boyfriend Ned (Barney McFadden) assaulting Ben for stealing her. 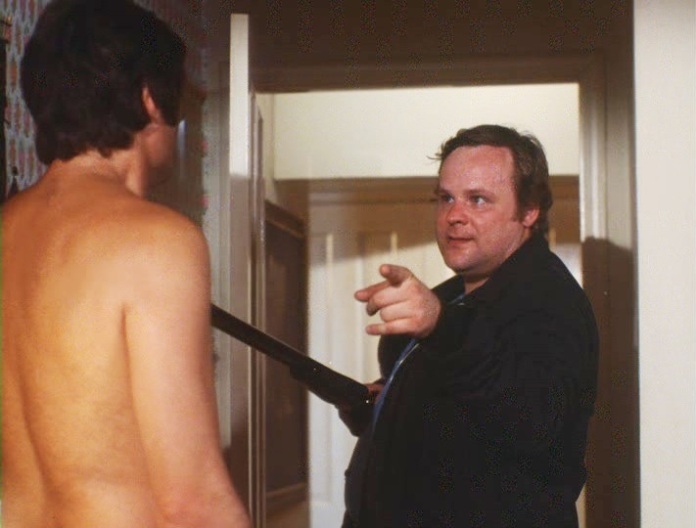 This portrayal of the dark side of a “normal”, adult world is balanced by oddball outsiders whose strange awareness and retreats into private worlds of fantasy ironically arm them for the fight against evil; in not living in the “real” world, they’re the better prepared for its collapse. Mark is warned by his father he’ll never make a living out of his passion for horror trappings, but, of course, his geek smarts will fortify him in his battle against vampires, just as Ben’s imagination makes him keen to the threat of the Marston House when no one else is. As tiresome as King’s writing style gets—and why I prefer watching the movies made of his works— it’s this cable he has plugged into the yearnings of his readers that borders on genius. 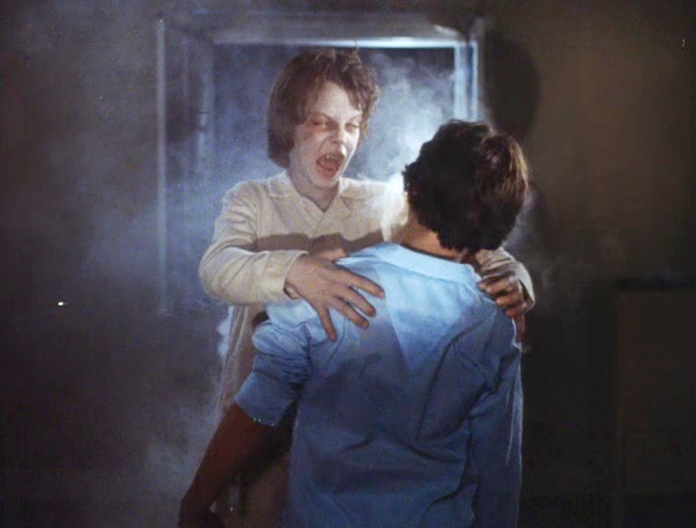 Hooper aims more for atmosphere than slickness, employing touches that wink to fans of older horror movies: drawing out the parallel of Barlow’s arrival with that of Dracula at Whitby; the Psycho-esque look of the Marston House and its interior of pure gothic decay; fog-wreathed docks and shadowy graveyards; and most indelibly, modeling Barlow’s appearance after Max Schreck’s Nosferatu (apparently the idea of sacked screenwriter Larry Cohen, in the same year, oddly, that Werner Herzog did his own remake of Murnau’s sepulchral classic) rather than the novel’s more modern, suave Euro-trash monster. Barlow’s long-delayed first appearance, finally erupting into the prison cell of Ned, is a doozy. The 1970s, the busiest decade in the history of the horror film, had been largely absent of vampires, apart from the crappy tail-end of the Hammer cycle, the Count Yorga and Blacula films, and Jean Rollins’ bold, underground films, like Lèvres de Sang (1974). 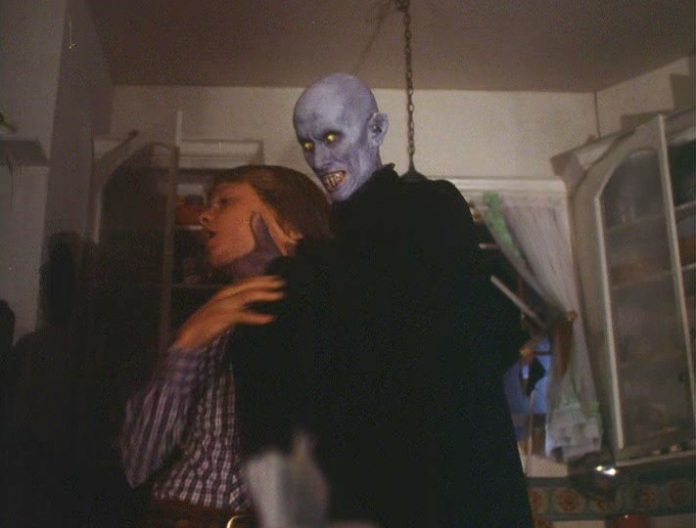 In reviving a moribund subgenre, Hooper employs fresh details for his vampires, like glowing eyes and wire-riding levitations, that would energise subsequent variations like Fright Night (1985) and Near Dark and The Lost Boys (both 1987). The eeriest scenes have Barlow’s adolescent victims drifting out of the fog outside windows, pleading to be let in and scratching incessantly on the glass, evoking the purest essence of childish, nocturnal anxiety. The early scenes have an offhand, almost sloppy feel, but this proves to be part of an skillful conditioning style; as the humdrum gives way to the urgent, so the camera movements become more elaborate, with impressive sweeping crane shots and clever framing in the final third as our heroes enter Marston House to root out evil, suggesting a new overlording presence and order. 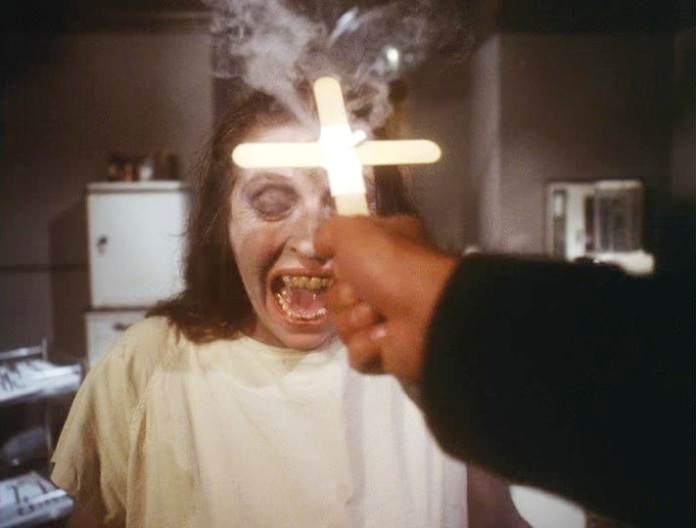 The town’s full name is Jerusalem’s Lot, which was also the original title of the novel, shortened at the behest of the publishers who though it sounded too religious. This makes clever association with biblical tropes: the holy city of Jerusalem segues into Lot and his daughters, the lone survivors, of the cursed city of Sodom and where Lot’s wife famously looked back and was turned to a pillar of salt. Salem’s Lot, the quintessential small American town, quickly turns into a septic den that Ben and younger double Mark barely escape. Lot’s wife could be Susan, who is caught by Straker and vampirised by Barlow. 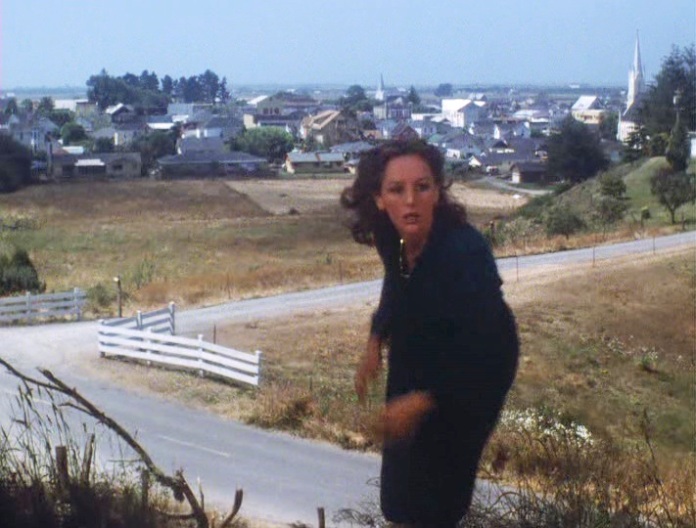 Susan, drawn first to handsome stranger Ben, follows him into the house only to vanish, and Straker amusedly tells Mark that he took her to the man she really wanted to meet—an interesting hint of violently morbid sexuality that isn’t explored. But that’s always been King’s style. He provides ready analogues for real-world experiences (domestic violence in The Shining, groups for survivors of child abuse in It, sexual awakening and repression in Carrie) without risking alienating his audiences by exploring these metaphors in depth, cloaking them instead in deeper webs of metaphor and mystification. In a splendidly dark coda — a touch purely that of Hooper and screenwriter Paul Monash (who was having a good year in 1979 between this and his excellent adaptation of All Quiet on the Western Front) — Vampire-Susan pursues Ben and Mark to Guatemala, where they wash up after they destroy Barlow, Straker, and burn down Marston House. 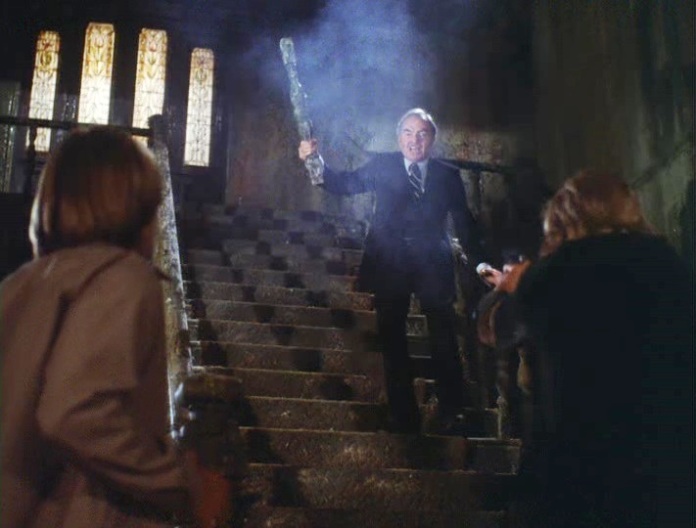 This leads to a strikingly tragic final scene where Ben stakes Susan despite her protestations of love before he and Mark continue a life in exile. This last note has an intriguing political undertone: Ben is defined as a double-outsider, both with his arty bent and his “left-wing” status. King himself, who published the novel in 1975, said the novel was explicitly inspired by his own gnawing anxiety over Watergate. In running from the United States, pursued by agents of spreading evil, Ben and Mark become emblematic dropouts fleeing an oncoming reactionary backlash. 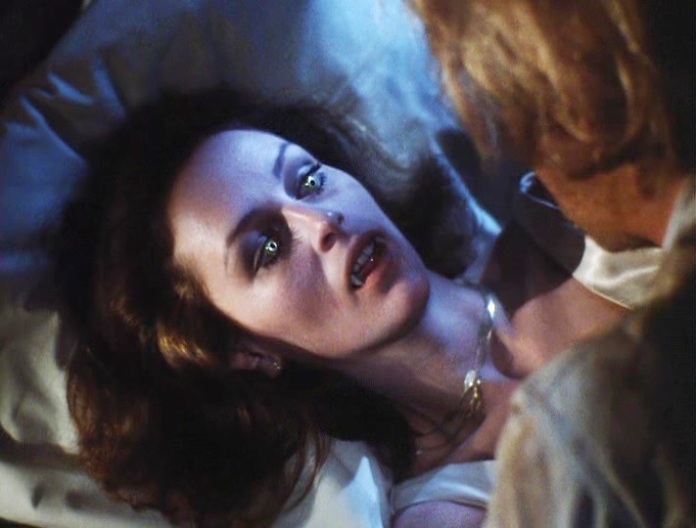 Amidst the impressive cast, Mason, with ineffable cool but also a subterranean strand of repressed panic in attempting to appease his dreadful master, stands out; so does Bedelia, playing Susan with a mix of the worldly and the uncertain. The ever-entertaining Kenneth McMillan plays the canny but flaky local constable. Most problematic is Soul, who flounders in playing a troubled intellectual hero. His way of suggesting depth is to wrinkle his brow constantly and talk in a croaky baritone. Salem’s Lot is far from perfect—the finale wobbles, with the dispatch of Barlow, so memorably introduced, disappointingly easy, and there are faults in the story progression. But it’s still a hugely entertaining reminder of how well a contemporaneous horror yarn can work.