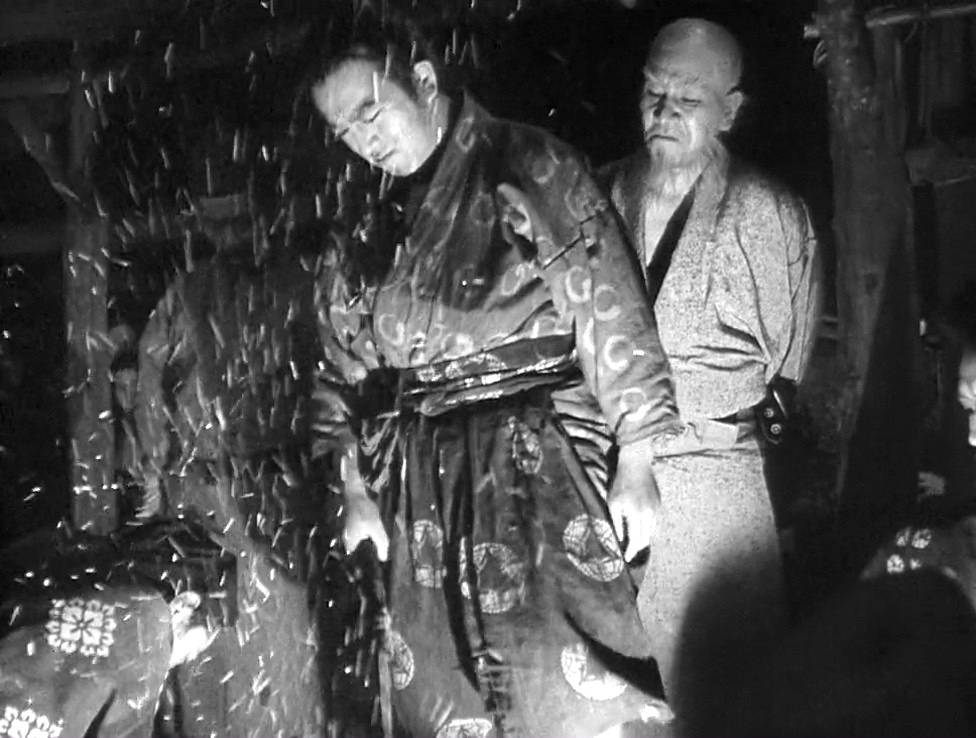 Kenji Mizoguchi’s legendary 1954 film is an arresting blend: a story derived from folk-tale themes, essayed with a rigorous clarity of storytelling, and realised in the most beautiful and involving cinematic terms. Mizoguchi is often cited as being Japanese film’s most perfect and lucid stylist, and Sanshô the Bailiff would certainly bear that reputation out. If his great rivals Ozu and Kurosawa preferred, respectively, the quiet, intricate intimacy of close, deeply personal drama or an expressive, elemental sense of nature and the soul, Mizoguchi rather evokes both sensibilities and sets them in subtle conflict. These tendencies can be seen in the intricate way Mizoguchi offsets the rhythms of his human drama, replete with cruelty, parasitic and hypocritical governance and officials, hard moral choices, and bleak chances, with the calm abundance and simplicity of nature, imbued with an undercurrent of spiritual longing. His work in Sanshô is both utterly heartfelt but also the product of a thoroughgoing ironist, as ideal and actual, nature and humanity, baseness and transcendence lock in a defiant, grueling struggle.

The film opens with a storytelling technique reminiscent of the in medias res tradition of classical sagas, as the family of Masauji Taira (Masao Shimizu) makes the journey across Japan to join their patriarch at his distant job post. His wife Tamaki (Kinuyo Tanaka), son Zushiô (Yoshiaki Hanayagi), and the daughter Anju (Kyôko Kagawa), whom he hasn’t seen since she was an infant, are going on foot, accompanied only by their female servant Ubatake (Chieko Naniwa). Camping one night in a district that is rife with slave traders, the family are visited by a priestess (Kikue Môri) who offers them shelter. But the offer was a ploy to get Tamaki and Ubatake into the boat of two slavers who try to leave the two children behind: in a panicked struggle, Ubatake falls from the boat and drowns and Tamaki is taken to Sado Island and forced into a life of prostitution. Zushiô and Anju are sold to the estate run by Sanshô (Eitarô Shindô), bailiff for the state of Tango and defender of the interests of the entrenched aristocracy—he manages the estate of the Minister of War—who maintains a strict and brutal hegemony over a large population of indentured servants. Sanshô’s son Taro (Akitake Kôno), quietly disgusted by his father’s inhumanity, learns of Anju and Zushiô’s parentage and advises them to conceal their real identities and wait to until they are older and stronger to break free.

Zushiô takes on the name Mushu, after the place of his birth, and Anju becomes Shinobu, and they survive for 10 years amongst Sanshô’s slaves. Zushiô becomes hardened and callous, emptied of any intention to escape and preferring to get in tight with the bailiff, even carrying out one of his standard punishments for attempted escape—branding on the forehead—on an old man. When Anju hears a newly arrived girl singing a song she heard on Sado Island, in which her and Zushiô’s names are mentioned, it seems to confirm that their mother is still alive and living under the name Nakagimi. Tamaki is indeed still alive, and her captors are so fed up with her attempts to escape they have hobbled her by cutting her Achilles’ tendons. Zushiô is initially contemptuous of his sister’s attempts to talk him into escaping, but when they obey Sanshô by carrying a old and sick slave woman, Namiji (Noriko Tachibana), into the forest to die now, Zushiô comes around. Anju insists that Zushiô take Namiji instead of her. But once he’s gone and the bailiff’s men are roused, Anju drowns herself in a lake to avoid inevitable torture. Zushiô finds shelter at a monastery where Taro has become a monk, and Taro and the abbot endeavor to help him make contact with the prime minister in Kyoto.

For many good reasons, the exalted spheres of Japanese cinema in the late ’40s and ’50s were preoccupied with a deeply ruminative, urgently humanistic philosophy that arose from the country having to contend with the wrenching cultural and physical fall-out of the Second World War. That soul searching tended to be explored through historical parable. Sanshô is one of the most sublime results of that era, and, in spite of its formal beauty and warm heart, it’s also a coldly realistic film that tells a grim truth about Japan’s feudal past that’s virtually unimaginable in the Technicolor plasticity of Hollywood historical movies from the same period. Nor is the film at all hesitant about describing the interests of power and varieties of exploitation—physical, fiscal, political and sexual. It’s made clear early in the film that Taira was sacked for attempting to ease the burden on his citizens rather than meet the demands of a militarist government. Sanshô himself is protected and honoured for his capacity to turn human suffering and ruthless oppression into piles of money for the government coffers.

Later, as he attempts to assert his claims, Zushiô finds himself forced to sneak about the prime minister’s residence to have any hope of seeing the all-powerful official, reduced to despairing pleading before being dragged away and imprisoned. Whilst the minister and the state he serves are capable of recognising nobility—Zushiô carries an idol that was given to his clan decades before by the prime minister’s ancestor—and restore Zushiô not only to rank but give him the governorship of Tango as compensation, he soon learns he isn’t entirely empowered to end slavery or even legally punish Sanshô when his misdeeds are restricted to a private estate. Justice is entirely subordinate to the regular running of the state’s machinery and the interests of powerful men. From the smallest to the highest level of the society portrayed, people make commodities of each other, and respect is a debased currency as hierarchy is constantly abused. 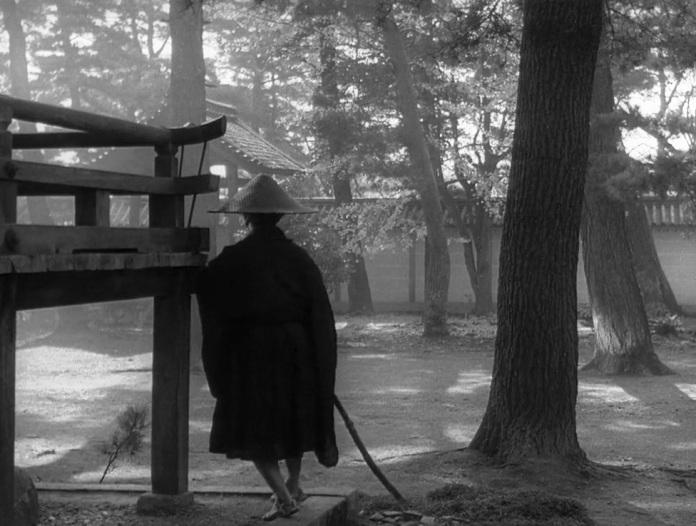 Mizoguchi doesn’t offer any actual portrayals of violence, and yet the key moments of corporeal cruelty that punctuate the film are all the more effective for their judicious presentation of how this mass of exploitation is enforced: even when the physical damage is only hinted at, it’s impossible not to cringe during the scenes of branding and Tomiko’s hideous punishment—the antithesis of torture-porn. The narrative’s steady, committed assault on the aristocratic family unit—mother turned to whore, children as forced labourers, father a figure of distant impotence—becomes a tour through the precincts of hell for the most stable and hallowed of social institutions. This necessary awareness of the true state of things is, however, inextricable with Zushiô’s final dedication to realising his father’s ideals: the secure walls of social roles that have been violated by his family’s travails give him an awareness of the terror and complexity of life that is alien to the invested folk around him, and drives his determination to keep the wheel in spin for people beyond himself and his kin.

For all the high tragedy, darkness, and cynicism that permeate Sanshô as a narrative, however, it’s also a cracking good yarn that powers on with Dickensian twists of fortune and fortitude of moral meaning. The breathless intensity of the storyline is undeniable, and that’s something of a lost art these days in so much cinema and literature—the capacity to retain the depth of great art and the force of fine melodrama in a singular shape. Mizoguchi and his screenwriters Fuji Yahiro and Yoshikata Yoda make the teeth clench with clever delaying devices, like Zushiô’s initial failure to make the prime minister listen and in the finale in which he tries to track down the woman known as Nakagimi only to be put on to the overeager tart (Teruko Omi) who’s inherited that reputed name first. By this time, Zushiô has triumphed not only over Sanshô, but also over the self-interested world he represents; Zushiô used the power given him by the prime minister to ban slavery, against the protests of his advisors and knowing that his action will surely end his career nearly before it begins. Sanshô, in retaliation, sends his men to knock down the decree signposts, which is what Zushiô counted on, for he can now exert his right to seize Sanshô for destroying the governor’s property, leading to liberation of the estate’s slaves.

But it’s a victory for other people more than Zushiô himself, as he learns of Anju’s death and grimly weighs his future as the former slaves party, riot, and finally burn down Sanshô’s manor in a nihilistic consummation. Hanayagi’s performance is the most compelling in the film (although no one is less than excellent), essaying an individual who passes through almost insensibly strange contortions of luck and station. His character swings from extremes of stiff-necked, glowering inhumanity to frantic pleading and unendurable, almost metaphysical terror as he appeals to the prime minister, to troubled but determined efforts to live up to his father’s creed and rescue what’s left of his family life. With him stand Tanaka and Kagawa, two pools of feminine calm and rooted conscience driven to terrible ends by their determination not to cave in to mere force.

Mizoguchi’s formal invention in interpolating fragments of explanatory flashbacks has become a common device in filmmaking, especially Japanese genre cinema, and yet it seems uniquely fresh and concise here. In a few deftly composed minutes of film, Mizoguchi describes the characters who will preoccupy the drama, their reasons for being in their current predicament, and the dangers, both emotional and physical, that await them: revealing the circumstances by which Taira lost his job and with a brilliantly economical flourish, panning down from Taira’s humiliation by a samurai general to show Tamaki’s reaction, before dissolving back into the present-tense as she takes a cup of water from a river, lost in pained reverie even as she tries to reunite the family. As the family makes it trek, Mizoguchi offers precisely composed shots encompassing characters and landscape that suggest a harmonic completeness to their world, usually offering frames filled with water, earth, flowers, and sky. The relationship between the material and spiritual lives of the characters is constantly entwined with physical setting, courtesy of Kazuo Miyagawa’s photography. 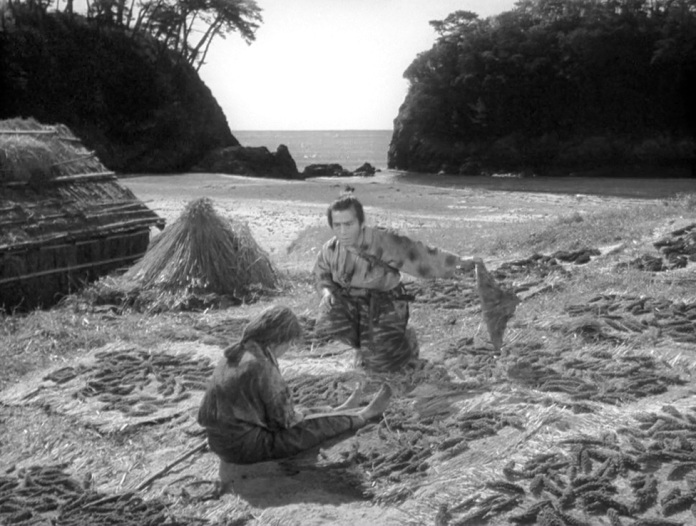 In later scenes, as when Zushiô finally visits his father’s grave, he finds it caked in flowers brought by his grateful subjects; Mizoguchi restores here the pellucid beauty of the early sequences, once again including sea, sky, land, and humanity in the shot. Anju’s suicide, a careful composition of the dim light of dusk and the utter stillness of the water, evoke the soothing end of pain and a forlorn, beatific deliverance. When Zushiô finally finds his mother, now aged, blind, and devastated by too much loss, it’s on the edge of a beach that’s been turned into a wasteland by the literal calamity of a tsunami, but that all too accurately reflects the shattered lives and mental states of the last two Tairas. When Zushiô apologises in grief for not returning as a great man or saving Anju’s life, but having tried to stick by his father’s principles, Tomiko, grizzled and crushed but not lost, assures him that if he hadn’t done so, she’s sure they would never have been reunited at all. It’s a simple message, but delivered with force and conviction. In cumulative detail and effect, Sanshô the Bailiff is like the universe in miniature.