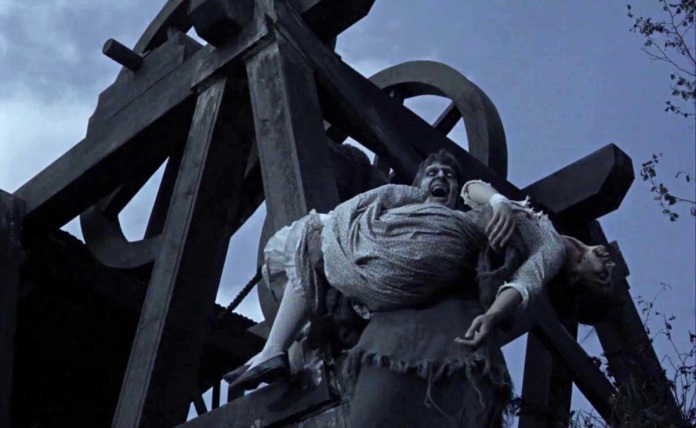 Shot back-to-back on location in Cornwall by John Gilling, a stalwart British writer and director, The Reptile and Plague of the Zombies are two of the most sober, solid, and intelligent of Hammer Studios’ 1960s output. The two films were shot back-to-back and intended to run as a double bill. They were never screened that way, but it feels right to look at them together, for they share common locations, themes, and a crucial cast member—the vivid young actress Jacqueline Pearce. Pearce would later gain a cult following playing a villianous dominatrix in Terry Nation’s late ‘70s scifi show Blake’s 7, but her brief window of mid ’60s prominence suggested someone headed for bigger things, a potential rival for Glenda Jackson and Diana Rigg as an intense brunette with acting clout. 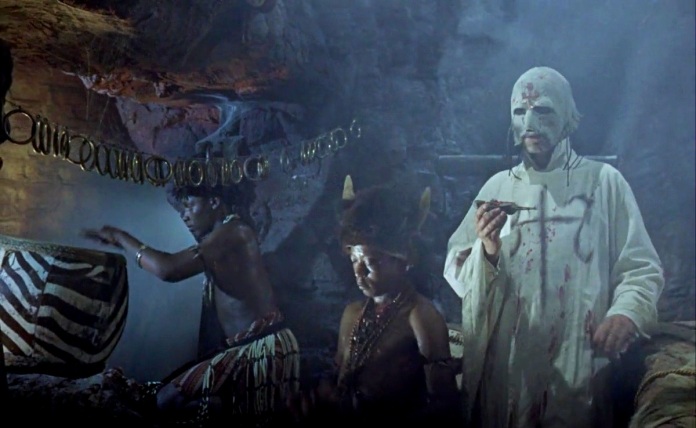 Set in the last third of the 19th century and striking a common note of colonial evils returning to bite the British backside, The Reptile and Plague of the Zombies display the radical bent of Hammer close to the end of the studio’s golden age when it could do little wrong at the box office. Exploring in The Reptile problems of nascent feminism and waning patriarchal authority and presenting in Plague of the Zombies an explicit allegory for social exploitation, and, of course, all wrapped in the cosiest folds of Hammer’s traditional, uniquely solid approach to the fantastic and the gothic, Hammer had its fingers directly on the pop culture pulse. The shift in location to Cornwall also offered a different milieu and mood to the overused precincts of forest so many Hammer films used to suggest the stygian wilds of th studio’s usual Mittel Europa.

Plague, written by Peter Bryan, sees an eminent professor of medicine, Sir James Forbes (André Morell) and his daughter Sylvia (Diane Clare) travel to the Cornish countryside on receiving a letter from one of Sir John’s brightest former pupils, Dr. Peter Tompson (Brook Williams), begging for aid and advice. A mysterious malady has been claiming lives in the small village where he’s set up practice with his wife, Sylvia’s school friend Alice (Pearce). Upon arrival, Sylvia is harassed by a group of fox-hunting aristocratic barbarians led by Denver (Alex Davion) when she directs them away from their prey. As they ride into the village pursuing her, they casually knock over a coffin containing the body of the latest victim of the undefined disease, infuriating his brother, Tom Martinus (Marcus Hammond), who takes out his feelings on the visitors and on Tompson, who’s utterly at a loss. Worse still, the fraying, desperate Alice is being assaulted by nightmares and physical manifestations of supernatural influence, perpetrated by masked voodoo practitioners in a subterranean vault. 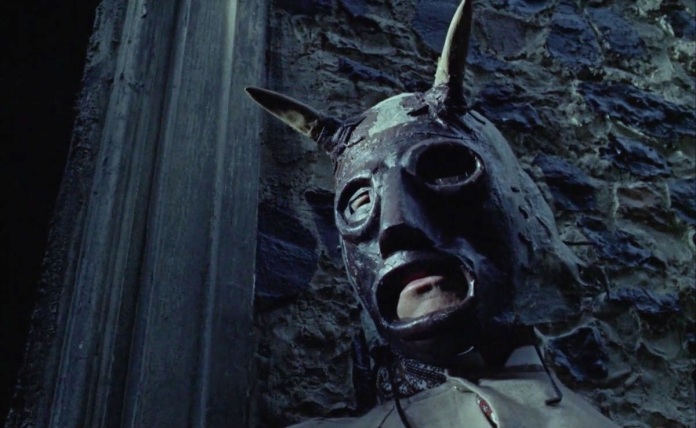 During the night, Alice wanders off, causing Sylvia to pursue her, whilst Sir James and Tompson dig up Martinus’ brother, only find the body missing from the coffin. Sylvia is ridden down and assaulted by Denver and the hunters, dragged to a remote manor house, and threatened with gang rape before their host, the autocratic local squire, Clive Hamilton (Tom Carson), intervenes. Hamilton begs Sylvia’s forgiveness of his friends, but she walks out in a fury, only to glimpse, in the ruins of an old tin mine, a dead Alice being dumped by a man with the pallor of a walking corpse. Sir John soon begins to discern the dread truth: that the villagers are one by one being turned into zombies to work in Hamilton’s tin mine, and Hamilton now has his sights set on Sylvia as a prospective sacrifice to his dark, imported religion.

Whilst the references to voodoo practice as being especially revolting and disgusting and Hamilton’s exotic squad of drum-beating black servants suggest the usual hoary racist take, Bryan’s script takes thorough care to pin the villainy squarely on Hamilton as a profiteer who has gone abroad and returned with a supernatural means of exploiting workers and ensuring their servility, thus offering commentary on abuse of immigrants and strikebreaking at the same time. Hamilton’s mob of uptown goons is a particularly gross caricature of a peculiarly English variety of well-bred bastardry, especially Davion’s Denver, who suggests the James Bond type of sadistic playboy stripped of any remnant nobility, drawing cards to see who’ll mount Sylvia first and encouraging his prey to “go to ground, little rabbit!”

Hamilton, whilst initially seeming outraged by such behaviour, has even grosser motives when it comes to ensnaring the pretty women he encounters, carefully arranging the little tricks—getting them to cut themselves and taking samples of their blood to use in his rites—to put them under his spell, whilst stating of himself that, “I would like be to popular…but that would require me to conform, which I cannot do.” In opposition stands the always wonderful Morell, who had formerly played Watson in Terence Fisher’s giddy 1959 version of The Hound of the Baskervilles, as Sir James, a gruff, grumpy hero, and Clare as his intelligent, willful daughter. In their first scene together, Sir James grumbles that he regrets not drowning her at birth, lending an edge of eccentric conflict to their mutual reliance.

Gilling realises the scenes of the voodoo rites within the depths of the mine with spilt blood, voodoo dolls, and furiously tattooing congregants, and Satanic-masked men stalking the dreary streets of rural Britain, with a near-surreal intensity. There’s a memorable graveyard scene in which Sir James and Tompson are forced to decapitate a newly undead Alice, and a fainted Tompson hallucinates the entire cemetery disgorging its denizens in a putrefying army. Plague of the Zombies was the first halfway serious zombie movie since the 1940s, and its mixture of social commentary and ghoulish threat might have given young George Romero an idea or two, and surely lent some juice to some European zombie movies with distinct visual echoes, like of Jorge Grau’s Let Sleeping Corpses Lie (1974) and Lucio Fulci’s Zombi 2 (1979).

The Reptile, written by Hammer bigwig Anthony Hinds under his usual pseudonym of John Elder, employs similar elements, especially the figure of a haughty, dictatorial master of a manor house, around whom mysterious deaths proliferate, except this time the man in question is Dr. Franklyn (Noel Willman). He’s a stern, mysterious taskmaster who keeps his nervous, attractive daughter Anna (Pearce again) confined in their house as much as possible, whilst the attacks of a mysterious beast leave locals riddled with bite marks and flush with fatal poison. Former Grenadier Guardsman Harry Spalding (beloved Aussie character actor Ray Barrett in an early, uncharacteristically heroic, part) and his newlywed wife Valerie (Jennifer Daniel) move into the house left to Harry by his brother, one of those mysterious victims killed in bizarre circumstances in Franklyn’s house at the very beginning. Franklyn is desperate to get them out of the house again, but the Spaldings find a local friend in Tom Bailey (Michael Ripper) and are warned of the mystery by resident eccentric Mad Peter (John Laurie). When they encounter Anne, the Franklyns are fascinated by her brittle, intoxicating persona and alarmed by the doctor’s fierce repression of her.

The punchline this time is that Franklyn, a scholar of all varieties of religious practise who had spent decades in the Orient, has incensed a Malayan snake cult whose practises he spied upon. They kidnapped Anna and had her possessed by a snake-demon. Under the insidious control of a cult priest posing as Franklyn’s servant (Marne Maitland), the demon occasionally takes Anna over and sooner or later destroys anyone who comes close to her. This makes for an interesting variation on the familiar paranoid theme of much Victorian gothic literature, in which icons stolen from other lands bring imperialist devils home to roost manifesting displays of corrosive supernatural influence. In this film, the theme is made more explicable and pointed, as the sibilant Malayan reiterates to Franklyn the arrogant crime for which he will be punished continually through his own daughter, who has taken on a sensual intensity forbidden to Victorian femininity.

This abuts a second more acutely troubling metaphor, one of incestuous patriarchal panic and attraction to emerging female sexuality. In a brilliant scene, Franklyn has Anna, who, having lived with him in the East for many years maintains Indian customs and dress, play the sitar for the Spaldings. She travels into a deep, predatory trance while playing, she and her father staring at each other in fixation until the doctor erupts in disgust and smashes her instrument. Later he’s nauseated to discover she’s shed her skin, leaving it in her bed, a perfectly distilled image to represent the forbidden sexuality at the tale’s heart. A common thread in the two movies is the portrait of a prodigious widowed father with a precocious, takes-after-her-old-man daughter, except the mild abrasiveness of the Forbes duo conceals deep affection and trust, with the medical man’s daughter a pithy and worthy offspring, whilst the stern religious expert’s daughter has become a manifestation of all that must be repressed and disdained.

Both films were shot by Arthur Grant, whose steady work offers some fluid tracking shots and cunning deep-focus frames. Apart from Pearce, the two movies also carried over in the cast the familiar supporting actor Michael Ripper, who, particularly in The Reptile, has the most sympathetic and substantial parts of his career. It’s a pity that Pearce has relatively little screen time in either film, though she works wonders in both, technically playing second fiddle to far blander female leads, of which the preferable is Clare, an inexperienced actress (and Buffalo Bill’s great-granddaughter) who is decent enough as a tomboy out of her depth. Both Carson and Willman, in their distinct roles, are memorable embodiments of unctuous villainy. Of the two movies, Plague is the most entertaining and propulsive, with its corny but lividly impressive imagery of the eerie mine and its underground workforce of rotting slave labour, rampaging and bursting into flames in the breathless finale when their dolls upstairs fall into a fire. But The Reptile is the most intriguing and effective in building a mood.

Gilling’s direction isn’t as sinuous and atmospheric as the work of Hammer’s first and finest horror auteur, Terence Fisher, with slight narrative stumbles in nearing the conclusion of both films. But his work is nonetheless solid and as free from cheese as a Hammer film could possibly get. Plague, with the nightmare graveyard scene, is notable for sporting perhaps the first-ever example of a dream sequence offered purely for shock value, a touch that would be reproduced to less and less effect many times in the genre’s coming decades. Also particularly admirable is the force with which Gilling uses jagged cuts, for instance, at the start of Plague, where the exotic ferocity of the voodoo rite suddenly segues to the becalmed grounds of the Forbes’ house, illustrating a dramatic disparity in conflicting realities, or in The Reptile when a brief but powerful insert finds the Malayan mastermind singing and charming his reptilian slave as she writhes in perverse ecstasy in her bed. In such moments Gilling wields intelligent, disorientating power.