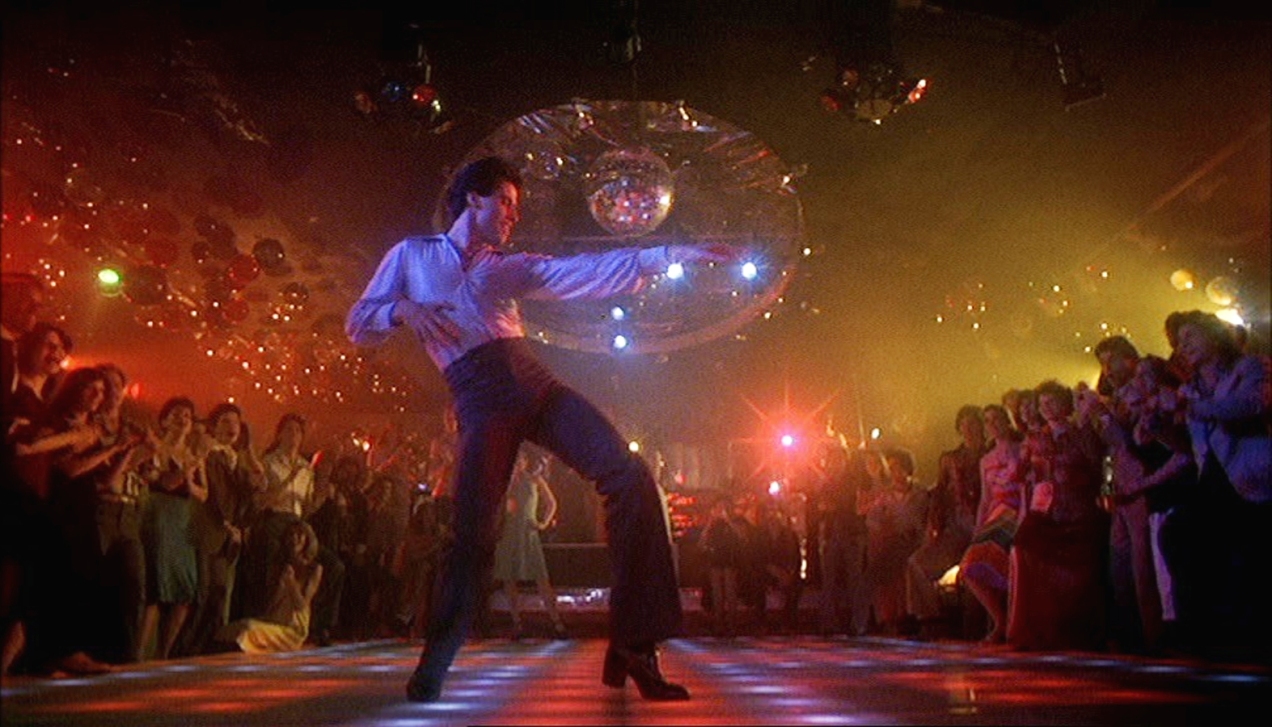 Invitation to the Dance Movie Blogathon 2008

I realised, after devoting not too much time thinking about it, that three of my favorite dance scenes are all variations on the same moment, springing from Saturday Night Fever. It’s a film remembered as the flashpoint of Disco culture, a polyester-swathed celebration of those days of gritty glamour, chest hair, nose powder, and mirror balls. The soundtrack sold by the billion, and John Travolta was catapulted to the kind of stardom that consumes itself. But Satruday Night Fever is far more than just the ’70s equivalent of one of those goofy 1950s rock films like Rock, Rock, Rock or Let’s Twist Again, where the latest big thing is trotted out in a dimly plotted vehicle. Saturday Night Fever was a ballsy, intelligent movie with telling things to say about (then) modern urban youth culture, a bridging point between the American New Wave cinema and the oncoming world of blockbusters.

Cunning producer Robert Stigwood found an even more cunning director in John Badham. What Badham did with the ailing dance movie formula was to take it back to its roots—a close ancestor is Lloyd Bacon’s 42nd Street (1933)—and contrast the high of cutting loose on the dance floor with the downer of surviving everyday life. Our hero is Tony Manero (John Travolta), a 19-year-old working-class Italian kid living at home with his nagging, neurotic parents in Brooklyn, working in a paint store and going nowhere fast. Like so many people of his age and class, he only becomes what he thinks he truly is at night, when he transforms into an Achilles of the dance floor, desired, admired, and revered by all. He embodies a contemporary male fantasy, delighted in his own body and prowess as a dancer. He’s a love totem for females, leaving his dangerously close to contemptuous of them. His first journey to the 2001: Odyssey club begins momentously as he enters with his friends to the grandiose strains of “A Fifth of Beethoven.” He cuts through this crowd like a messiah of cool. But Badham delays our true appreciation of Tony’s prowess. Tony dances here with two women who worship him, but he hardly burns up the floor. The DJ compounds his irritation by putting on a salsa-flavoured piece, the music of the despised Puerto Ricans; “You can’t dance to this shit!” 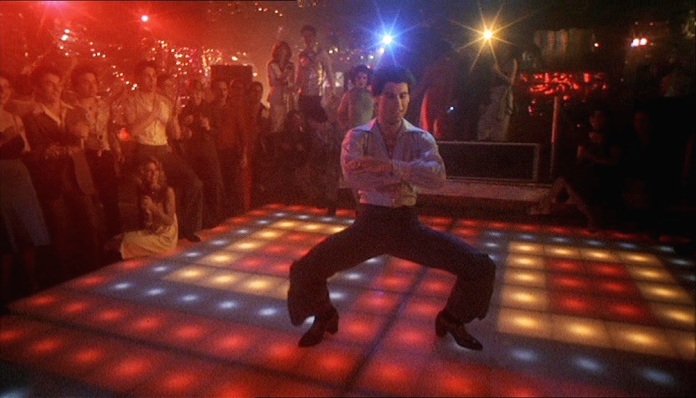 But this is where Tony first glimpses Stephanie Mangano (Karen Lynn Gorney), the girl who temporarily dominates the floor in the same way he’s used to. Right from the start, Stephanie challenges Tony’s prejudices and self-love. And he digs it. But still he does not cut loose. Instead he is absorbed into the crowd line-dancing to “Night Fever.” The link between the song, the film’s title, and Tony becoming absorbed, reinforces his place in a community, a lifestyle. His tale as just another in this semi-naked city. Badham, having cultivated a Scorsese-esque verisimilitude in the rest of the film, presents the inside of the club as a candy-coloured dreamland filled with hot ladies, slick movers, strippers and hip tunes. The camera drinks up the flashy, sexy show on the floor; one shot of a woman’s swiveling dress and legs lasts about 20 seconds. Tony’s great dance number arrives halfway through the film. Tony is on a high, expecting Stephanie to come and in the company of his brother Frank (Martin Shakar), whose own decision to leave the priesthood mirrors Tony’s increasing discomfort. His frustrations, his inability to get in the groove, have then been mirrored by the audience’s own desire to see him let rip. With irritation and hope in his soul, and weighed down by a sluggish partner Connie (Fran Drescher, who would later gain horrible revenge for her slight in this scene), Tony hears the opening chords of “You Should Be Dancing” and declares, ‘Forget this!’ He sets about brushing away all the other dancers, and cuts loose. 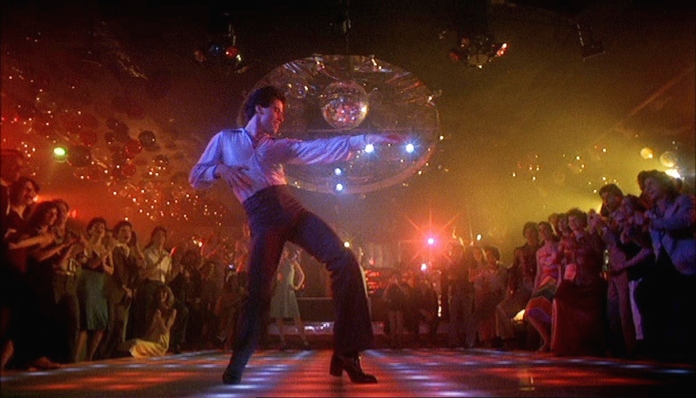 Badham shoots the sequence with élan, but also visual economy. As Tony begins, he struts up the centre of the stage, pretending to roll up his sleeves and tighten his belt like a pugilist or gunfighter awaiting action. Badham cuts in for a low shot of Travolta’s beaming, aquiline face as he swings his arm about in a lordly survey that both embraces the audience in his coolness and makes them bow down to it. Travolta sleekly stakes out each of the four corners of the stage, his flared pants and platform shoes acting like knifes that slice the floor into rippling, patterned pieces. Each move gains in a technical and athletic virtuosity, building to herky-jerky robotic flourishes. The centrepiece of the act sees him stake out the front of the stage, rapidly stabbing the air with alternating index fingers, slapping the soles of his shoes, before cocking his left leg out, leaning away to the right, thrusting his pelvis as his arm jabs the air like a musketeer’s sword before tossing in another play-act vignette of wiping off his own seat. Badham cuts in to a low-angle, front-on shot that emphasises the architecture of the move. It’s the most iconic image of the film, a perfect fusion of muscle, music and fashion. 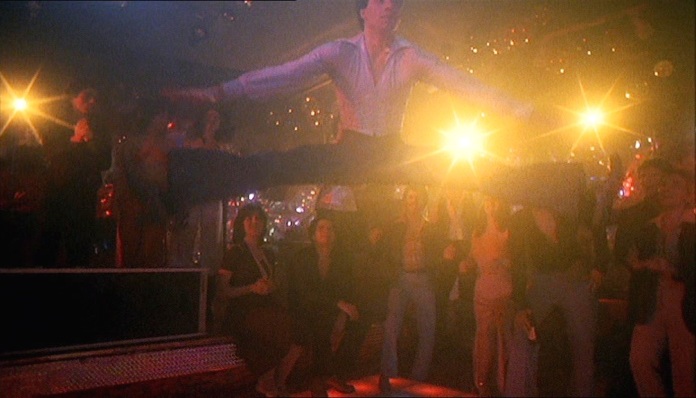 Tony retreats down stage, spins, throws himself into a splay-legged crouch, slides across the four quarters of the stage, and regains his feet in a kung-fu forward flip. He has established his indifference to gravity. He folds his arms, and begins dropping to his knees and leaping up in the Cossack style, crowned in the moment when he throws himself into the sky, legs wide out to his hands. This is the dancer as action hero, as urban cultural warrior. The sequence is a celebration of his masculinity, a new brand of masculinity that likes to display itself in a fashion previously reserved for women. Tony caresses his ass and humps both air and stage. There is a recognisable progress from the prancing precision of Fred Astaire to the rough-and-tumble of Gene Kelly to this martial dance-artist, but the celebration of male sexual prowess is new. It’s fitting for the pansexual philosophy of the era, Disco having been friendly both to multiculturalism and to gay life—one of the many reasons it was as loathed as loved. The film has bent over backwards to reassure us of Tony’s heterosexuality, however, and his postures have placed him in context with a long tradition of screen heroes. He’s a riposte to Taxi Driver’s thesis that Travis Bickle was the NYC heir to Western heroes; no, Tony is, at least for these minutes on the dance floor. 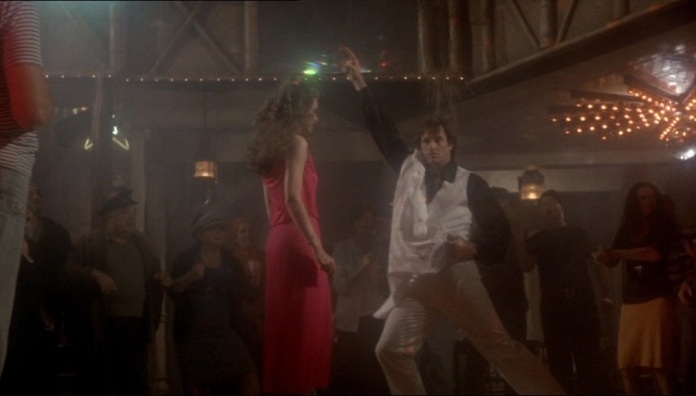 Burlesques on Saturday Night Fever were endless. None matched that found in Airplane! (David and Jerry Zucker, Jim Abrahams [“ZAZ”], 1980), a send-up of cheesy disaster movies that is actually a scurrilous satire on the cultural mores of the ’70s. The scene in the Mogumbo Bar presents the film’s approach in miniature, beginning as a caricature of the seedy movie dens that screen heroes like Humphrey Bogart would hang about in. A fist fight breaks out between a pair in uniform—not sailors or soldiers, as per usual, but rather two girl scouts—who beat the crap out of each other. One is sent sliding down the bar and collides with the jukebox, which immediately starts emitting a speeded-up version of “Stayin’ Alive.” The grizzled bar whores head for the floor. When one is stabbed in the back, his partner Elaine (Julie Hagerty) can’t tell the difference between his dying contortions and the epileptic chic of Disco moves. Ted (Robert Hays), entranced by the sight of Elaine, heads onto the floor and confronts her. Both are dazzled. Ted strips off his Navy tunic to reveal a white vest and black shirt, and tosses his jacket with élan into the crowd before striking the finger-in-the-air pose—only to have the jacket thrown back in his face. 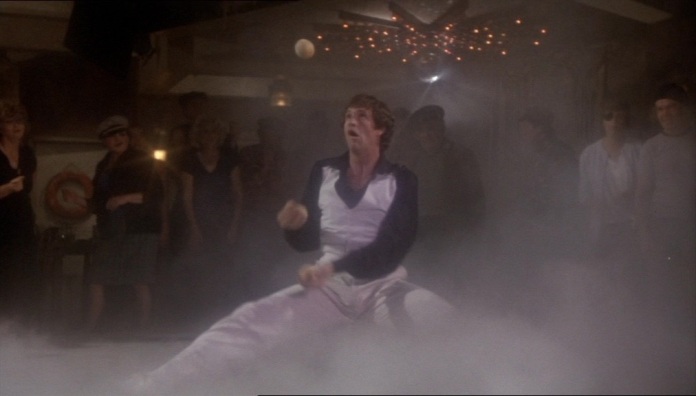 Unfazed, Ted and Elaine begin to dance, Ted throwing Elaine into the air and waiting many seconds for her to land again in his arms. He allows her to swing him by the ankles, until she accidentally sends him flying. Horror! Ted cartwheels through the air and falls to ground behind a crowd with a huge crash. But our hero is unharmed; he bursts out from the crowd and again strikes the air-stabbing pose, this time with such undeniable cool that his finger stabs in the air sound like bullets. Abrahams and the Zuckers prove how hip they are to the stylisation of SNF, as Ted’s heroic strut plays on Tony’s posing is an extension of the classic American movie hero. As well as being one of the funniest scenes ever committed to celluloid, it’s a true bookend to its model. In their later concerts, The Bee Gees took to showing both scenes on a big screen whenever they played “Stayin’ Alive.”

For Travolta, Saturday Night Fever eventually proved to be a millstone. A decade and a half later, he was a living joke (and it wouldn’t be the last time), having made enough money from the Look Who’s Talking series to retire, but having flushed the last of his cred down the toilet. Then, Quentin Tarantino cast him in his hipster-noir epic Pulp Fiction and had him dance.

The sequence alludes to Travolta’s early role, but it also, in its deliberately stilted sinuosity, refers to the dance of Jean-Luc Godard’s Bande à Part (1964). The moves of Travolta and partner Uma Thurman are drawn from oddball models—Thurman’s from the Duchess of The Aristocats (1970) and Travolta tossing in Adam West’s Batusi, all set to Chuck Berry’s unique Cajun-rockabilly tune “You Never Can Tell.” All this on top of the pair that we are supposed to be watching—a beatnik hitman and a coke-snorting ex-actress gangster’s moll falling in lust—builds into a scene that’s giddily hilarious, pointedly sexy, and subtly weird. It, in itself, became a vastly more ironic but equally pertinent pop culture icon to match the SNF scene, and remade Travolta’s career by both subverting and paying tribute to his time as the king of the dance floor.