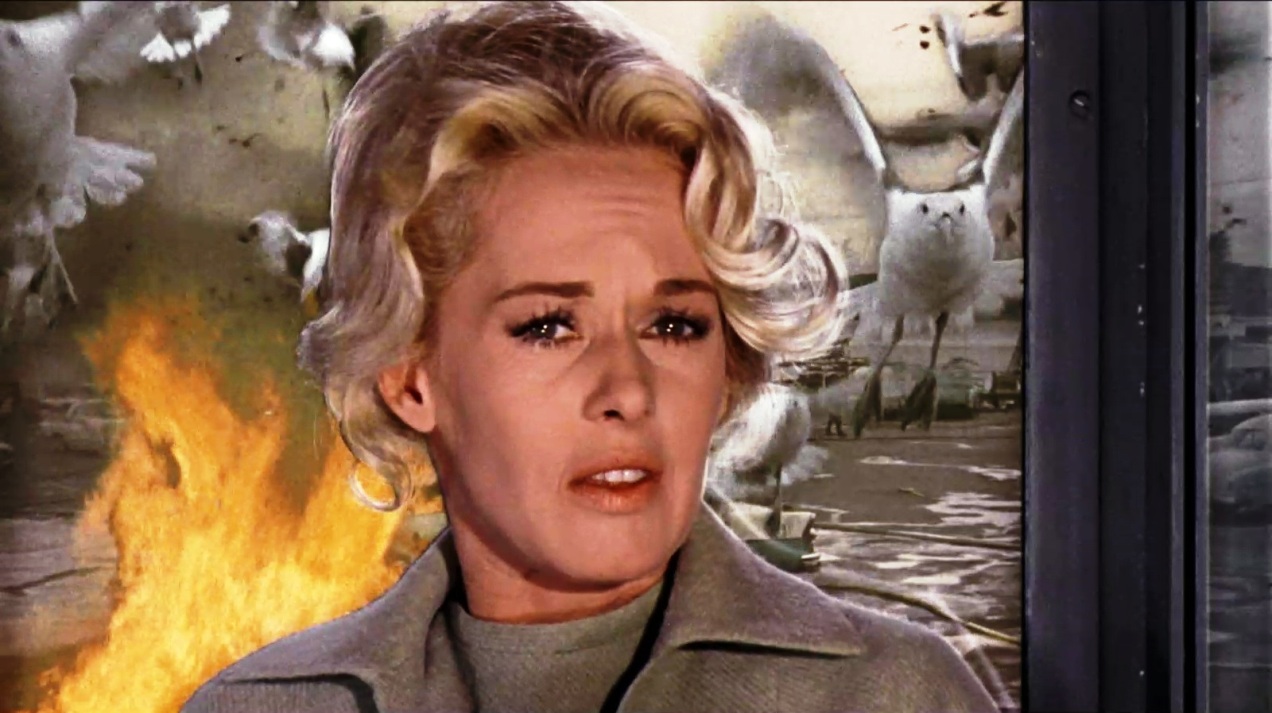 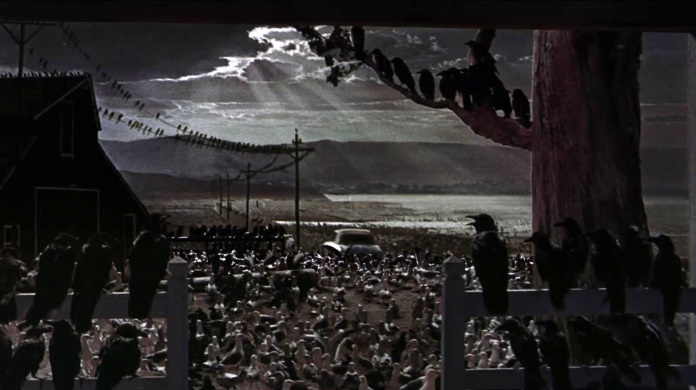 “Back in your gilded cage, Melanie Daniels.”

The Birds introduces us to Melanie Daniels, a socialite in the fullest sense of the word. A creature of her big-city environment, comfortable with her social and sexual status, adroit, adept at getting what she wants. Intelligent, wily, occupied, but powerfully bored, indulging her not-very-serious whims until they have serious results. We find all these things out about her in the first scene of The Birds – in the still-got-it smile she gives at getting a wolf-whistle on the street; in how she pretends to be a shopgirl for the benefit of Mitch Brenner (Rod Taylor); in how she’s irritated by Mitch having taken her in rather than vice versa, and then chiding her because of one of her stunts that he felt should have gotten her jailed; in how swiftly she tracks down the identity of this handsome, authoritative pest, so at odds with Melanie’s flittering interests. 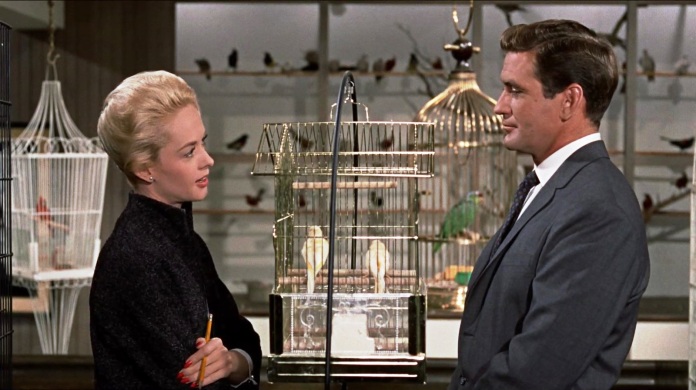 When Mitch ends the joke with the above-quoted line, he identifies Melanie as a prisoner, a practical joker for whom the joke is on herself, in her dissociation from responsibility. The line is, of course, a double pun. In The Birds, humans are living in a gilded cage, fluttering behind bars, delivered from the dangerous freedom of true flight, living in what Norman Bates called “private traps.” Soon the humans will be literally encaged by the birds. 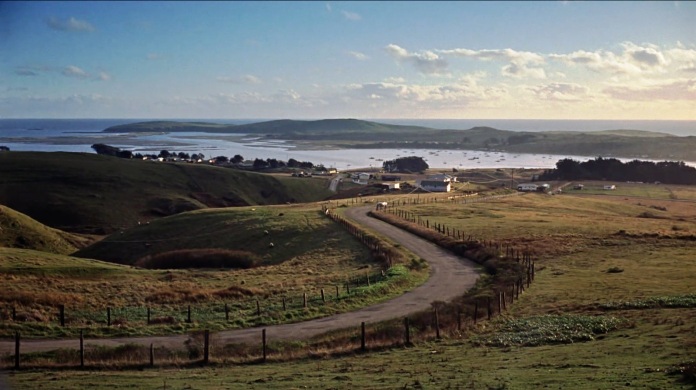 Like so many Hitchcock heroes, Melanie leaves the social womb of a city—here, San Francisco, capital of American gothic—for Mitch’s home town of Bodega Bay, at the end of a drive up the radiant Pacific coast. Hitchcock indulges in the hushed, rugged prettiness of Melanie’s drive, preparing the film’s dialectic of beauty and violence and humorously shows two lovebirds rocking to the car’s movements in their cage like people. Melanie has the best revenge for Mitch’s judgmental swagger, combining this, one of her patented practical jokes with an altruistic gift. The lovebirds, however, are a very unfunny portent of things to come. 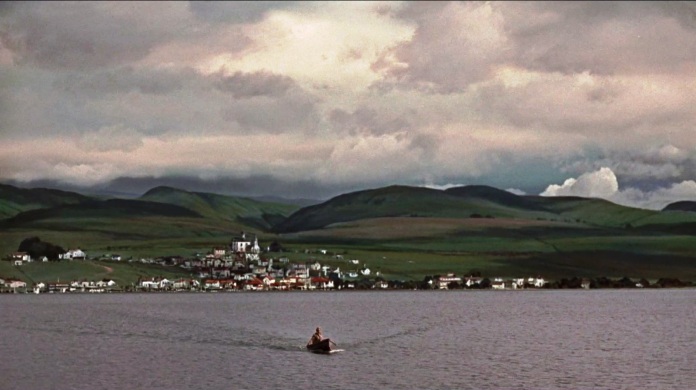 In teasing out information about Mitch and his mother Lydia (Jessica Tandy) and adolescent sister Cathy (Veronica Cartwright), Melanie talks to local schoolteacher Annie Hayworth (Suzanne Pleshette), a transplanted bohemian with a husky-voiced air of bruised, serene discontent. She recognizes the hidden meanings in Melanie’s journey, of which Melanie is herself hardly aware. Annie made the same journey once, failed, and washed up. Melanie successfully plays her prank, leaving the lovebirds in the Brenner’s white waterside house, making a getaway via runabout, only to have a seagull strike her head and draw a spark of blood that stains Melanie’s gloves, the first note of a gore symphony. 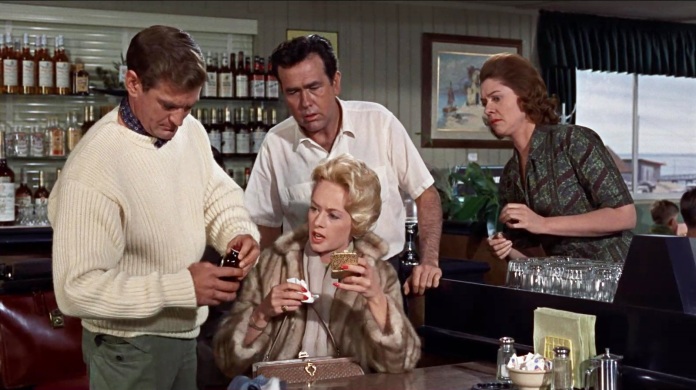 Melanie is one of Hitchchock’s most interesting heroes. She’s a Hitchcock blonde, but is linked less to Grace Kelly’s liquid nitrogen burn or Ingrid Bergman’s intricately suffering damsels than to Roger O. Thornhill in North By Northwest as a representative of a useless class, gossip-column twin to his playboy ad man. Melanie is caught up in charades, games, and jokes enacted with mirthless passive-aggressive precision. Mitch tends to Melanie’s wound with care but interviews her with lawyerly skill, entrapping Melanie in her lies until she’s left with no choice but to come to dinner with his family. The first half of The Birds is a neurotic screwball comedy, without that genre’s “oh, isn’t this hilarious?” nudges, populated by aching characters whose attempts to be witty and commanding constantly fall flat. 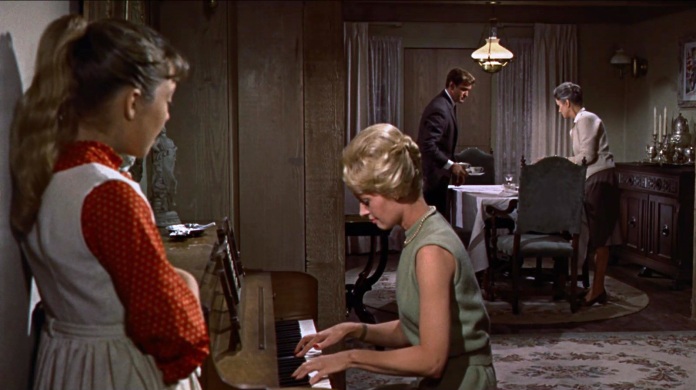 Melanie finds Lydia intimidating, just as Annie did. Annie has spent four years puzzling out the riddle of that sphinx for the next brave soul, and found Lydia’s iciness is not that of a domineering matron but rather of an emotionally weak woman. One of Hitchcock’s most powerful ever shots shows Melanie chatting on the phone to Mitch whilst Annie reclines, apparently disinterested, but tense through to her bones. 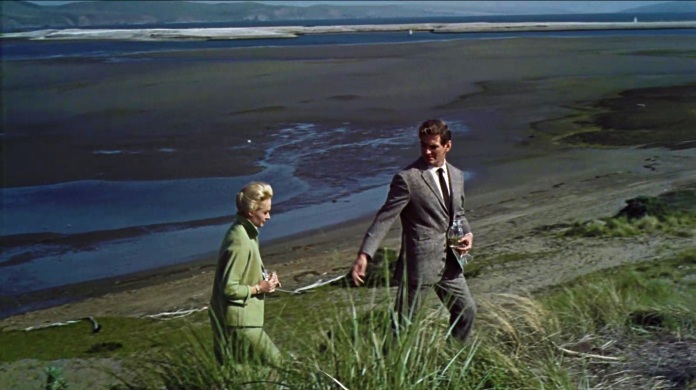 As the shot indicates, Hitchcock could have been a Renoir or Bertolucci if he’d wanted to, so acute was he at communicating the psychic workings of his characters. Hitchcock had learnt his craft during a vital two-year stint in Munich in the fulcrum years of the early ’20s. He was most inspired to direct by Fritz Lang’s Der Muede Tod (1921), which, with its expressionist style and death-and-the-maiden eroticism, casts a long shadow to this film (another future great converted by that work was Luis Bunuel). 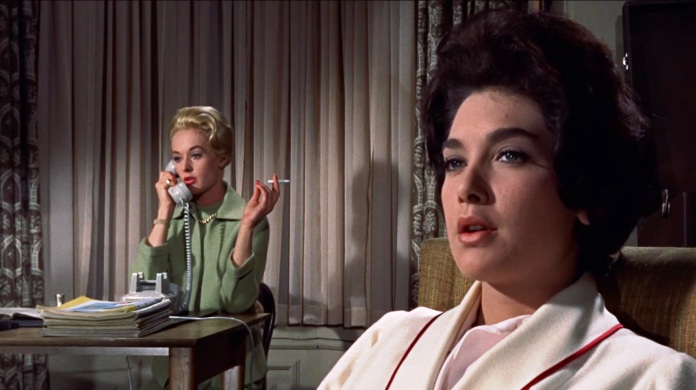 Hitchcock’s penchant for minimalist frames and charged visual metaphors, influenced by silent era expressionism, here has been razored down to resemble Japanese artistry, especially in the way Hitchcock places figures in relation to landscapes. Robert Burks’ superb cinematography is crucial; Burks, Hitchcock’s long-time collaborator, only made Marnie after this with him, and then died in a house fire. The sparseness of the drama makes The Birds the first haiku monster movie. 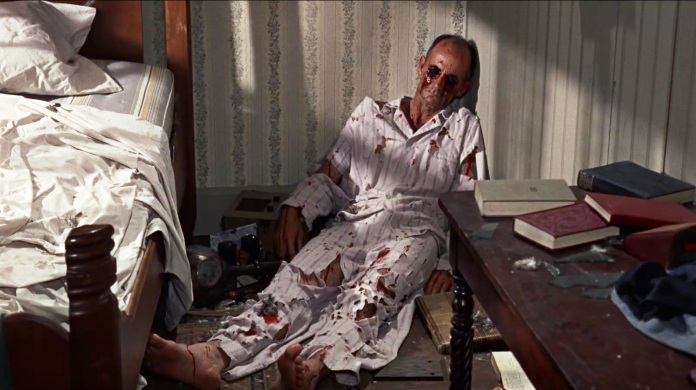 Hitchcock came from the lively tradition of Cockney black humor, with its obsession for interweaving sex, crime, comedy, and death that turns savage serial killings into the subjects of children’s nursery rhymes. From Lang and other German masters, Hitchcock’s native bent happily met the Germanic tradition of taking the psychological content in gothic and crime stories seriously. Perhaps aware that his standing as an artist and a commercial force was at its pinnacle, Hitchcock took risks with The Birds. Dispensing with music, traditional narrative, and star names, Hitchcock was selling The Birds on the back of his cinematic skill, using mere sound and the lack of it for generating suspense. 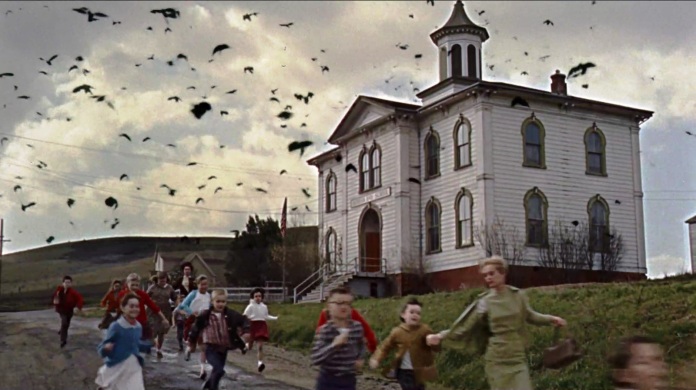 Most intriguing is the cue he takes from the Italian films of alienation. The Birds‘ lack of explanation for its horrors and question-mark finale dovetails the arbitrary cruelties of the macabre tradition with modernist narrative deconstruction, loudly introduced to cinema audiences by Antonioni with L’Avventura. The Birds makes a most pointed reference to La Dolce Vita. Melanie, talking with Mitch at Cathy’s birthday party, demystifies one of her most infamous stunts, cavorting nude in a fountain in Rome and states her recent stabs at altruism resulted from her Roman experiences: “It was very easy to get lost there.” She also reveals the true gap between her and Mitch, which has nothing to do with money or place of birth but with emotional bedrock. Whereas Mitch has a family who loves him almost to the point of suffocation, Melanie is consumed with loathing for her mother who “ran off with some hotel man in the east” when she was a child. Annie, supervising the party, watches them connecting with mournful expression. 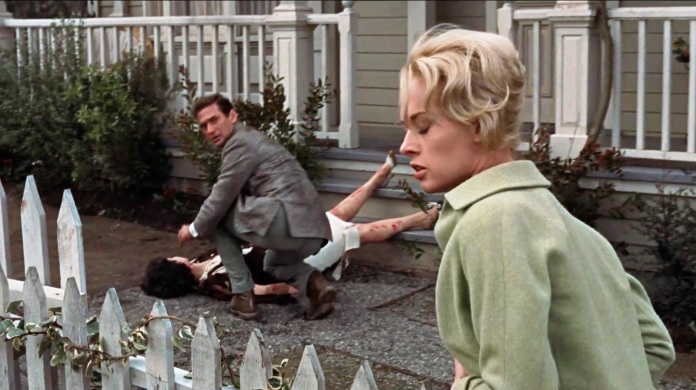 The film also plays with the apocalyptic hint of La Dolce Vita’s finale—that the rotting, hedonistic world will keep fiddling as beasts lurch from the sea. To catch Melanie’s La Dolce Vita reference is to think of that film’s characters, the threat she felt of being “lost” amongst them, and the urgency of destruction around them. The Birds seems a near-sequel, distilling its ’60s paranoia of nuclear holocaust and social-moral collapse, transmuted by Hitchcock’s Anglo-Catholic censoriousness into a parable of decay and struggle. Explanations for the birds’ behavior are posited – that they are affected by an illness; that they are a fulfillment of biblical prophecy; and, according to an hysterical diner patron, that Melanie is a kind of Typhoid Mary bringing bird attacks in her evil wake. Each of these explanations is mocked. But Melanie, whom the birds have targeted, does seem to be an avatar of everything wrong in the human world. The first three incidents—the gull that clips Melanie’s head, the bird that slams into Annie’s door, the attack on the children’s birthday party—come as the humans are playing some sort of emotionally fraught game, and the birds provide savage metaphysical comment. 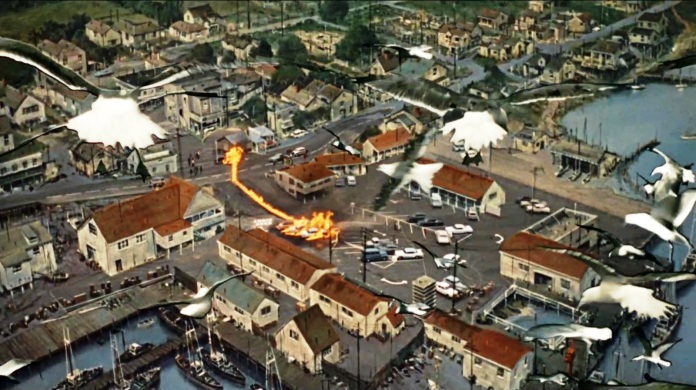 Still, Hitchcock, though a moralist, was never a hanging judge. He held the rich and the sexy, the happy and the hollow, the common man and the uncommon woman, in a dialectic of delight and disgust. He put his heroes through character tests of medieval rigor. The ironies of The Birds’ story develop logically even as worldly logic evaporates, and the characters each fall under the microscope that determines their fates. Mitch, one of Hitchcock’s familiar momma’s boys, is actually one of his most straightforwardly macho heroes. His rescues of Melanie are only metaphors for his rescue job of her psyche. Lydia, apparently loathing potential rivals for her son’s affection, is, in fact, projecting her own fear of rejection and desire for maternal intimacy onto them. Annie’s long-ago failure to fight through is mirrored in her tragically brutal end. 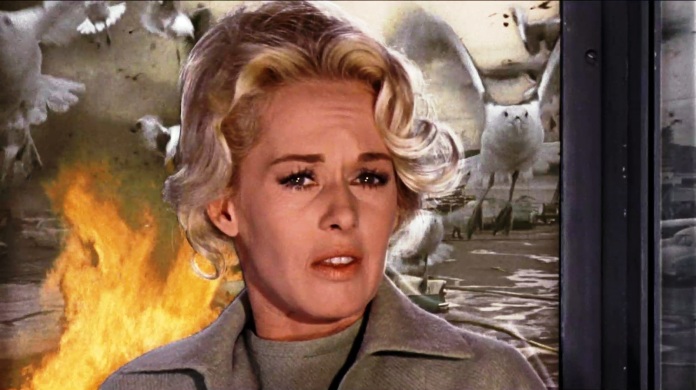 Melanie’s passage through the fire is central. She has not one, but two “shower scenes.” The shots of her driving through the vast, beautiful landscape find their ultimate reversal when Melanie is trapped in the cage of a phone booth, watching unimaginable carnage, her world gone from ennui-producing plenty to terror-provoking entrapment. Later, the inhabitants of the Brenner house pass through several circles of hell—a not-at-all-coincidental, infernal red glow from their fire is the only light as demons peck, shred, and smash their shell. 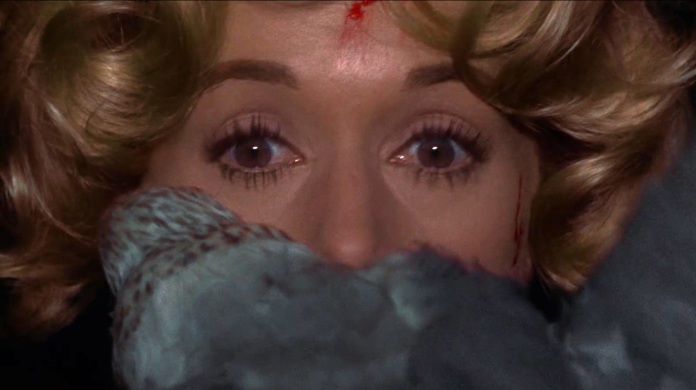 Melanie is caught alone in an upstairs room by birds that have penetrated the ceiling, and she’s being torn to shreds as she shouts first for Mitch, and then, barely audible, cries for him to get Cathy and Lydia out of the house. It is only at this point that all the Brenners arrive to save her. Melanie, in that final renunciation of self-interest and offering her last breath for others’ salvation, gains her the right to existence and have a family. The last image of her is of a near-catatonic, blood-spattered woman folding gratefully into the arms of mother Lydia. Hitchcock’s films are filled with heroes who finally gain their salvation by taking great physical chances, bordering on masochism, for their lovers. 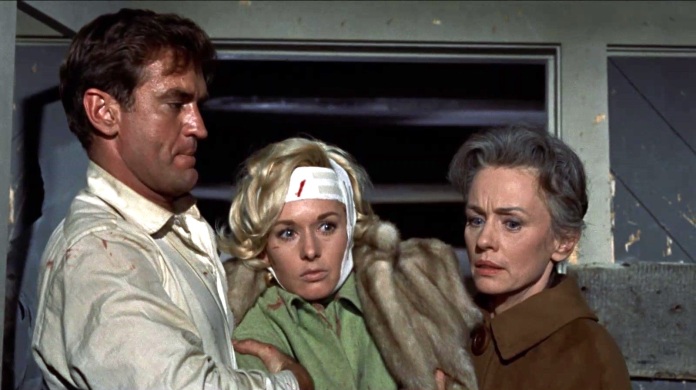 The Birds is Hitchcock’s last great film. Marnie and Frenzy have elements of greatness, but are uneven. Marnie especially attempted to cross into new territory of a dramatically sustained, stylized psychodrama, but was too late and unfashionable an effort. The Birds has its ropy moments, like the halfhearted make-up of mangled Melanie after her attack. Pleshette and Tandy are brilliant, and there are great cameos by Ethel Griffies as one of Hitchcock’s pet kooks, a know-it-all ornithologist, and the ever-sturdy Charles MacGraw as a gruff fishing boat captain. Hitchcock had one of his best writing collaborators in the great, recently late Evan Hunter, who provides a superbly suggestive script. Such was his seismic force and artistic vitality, that Hitchcock, despite only making two real horror films, The Birds and Psycho, created with each a brand-new genre strand. As Psycho pointed forward to the slasher film, so The Birds promises such varying works as Night of the Living Dead (1968), Jaws (1975), The Hills Have Eyes (1977), Aliens (1986), and even John Sayles’ Limbo (1999) with its theme of family found through trial.