The great works of British film noir are far less well known than the American, but it was one of the few genres that thrived for the British film industry after WW2, providing a needed counterpoint of down-and-dirty contemporary angst and grit in a period of British cinema remembered mostly for stoic-heroic war films and Ealing comedies. Of these works of distinctive British noir, by far the most famous is Carol Reed’s The Third Man (1949), given a mighty boost in notoriety thanks to its Graham Greene screenplay and American stars. But Brit-Noir is a rich seam of the genre lode, with some individualistic and parochial charms that distinguish it from the brand being made across the Atlantic. Where the expressionism-stoked American noirs of the ‘40s pushed towards hyper-stylisation and neurotic intensity, the British genre is far more restrained and naturalistic, absorbing the lessons of neorealism in a slightly different fashion.

If the American films are driven chiefly by psycho-sexual anxiety, with their proliferating femme fatales and mentally twisted antagonists, and barbed portraits of the American dream of power and money, the British films tend to be about ordinary people put through the torment of having their sense of stability drop out about them. Hitchcock, of course, was the first major British director to riff on those themes, but Brit-Noir would take it in different directions. A startling number of Brit-Noir films feature a finale where the villain or hero—it doesn’t matter much which—is, like Harry Lime, hunted into a tighter and tighter corner by relentless authority. The Long Memory portrays Britain as it was then—depressed, hungry, worn out by war, and full of the poor, dispossessed, transient, and criminal. It’s a relic from a time and world not so long past and yet almost vanished in many respects, like the film’s casual yet endlessly fascinating depiction of London as one of the world’s busiest ports, the Thames riverside in which the action unfolds clogged with the detritus of decades of capitalist adventuring, imperial trade and triumph, now left piled in the muddy fringes. 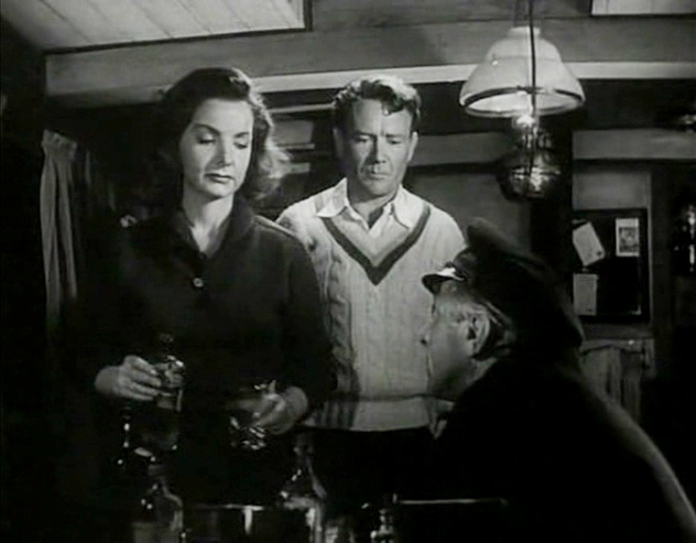 The Long Memory was Robert Hamer’s follow-up to the success of Kind Hearts and Coronets (1949), the signal Ealing comedy and one of the driest black comedies ever made. Hamer wrote the script for this thriller with Frank Harvey, adapting a novel by Howard Clewes. At first glance, the about-face from a period satire to a contemporary thriller is startling, but both films are most definitely about trying to survive in a world that is set up not to care about you, fuelled by the hypocritical divides of English society. Both are dramas of insiders and outsiders, with powerful undertones of class rage, and studies in forms of painful love. It’s also riddled with Hamer’s richly understated humour. John Mills plays Phillip Davidson, just released from an eight-year stretch in prison for murder. Looking for a place to be forgotten by the world, he holes up in an abandoned barge laid up in mud in the Thames estuary, with only a wandering hermit who claims ownership of the barges as his unwelcome company.

But Phillip has a mission. He wants to track down the people responsible for his imprisonment—Captain Driver (Fred Johnson), his daughter Fay (Elizabeth Sellers), and Tim Pewsie (John Slater)—who stitched him up for the murder of the malignant people-trafficker Boyd (John Chandos) to hide their own involvement in Boyd’s crimes. Boyd had actually clubbed one of his customers over the head in a fight over payment, and then seemed to drown when Driver’s boat caught fire and sank. Only one charred body was found, and the guilty trio reported only Boyd was present and that Phillip killed Boyd in a fight. Phillip was only present to ask the Captain if he could marry Fay. 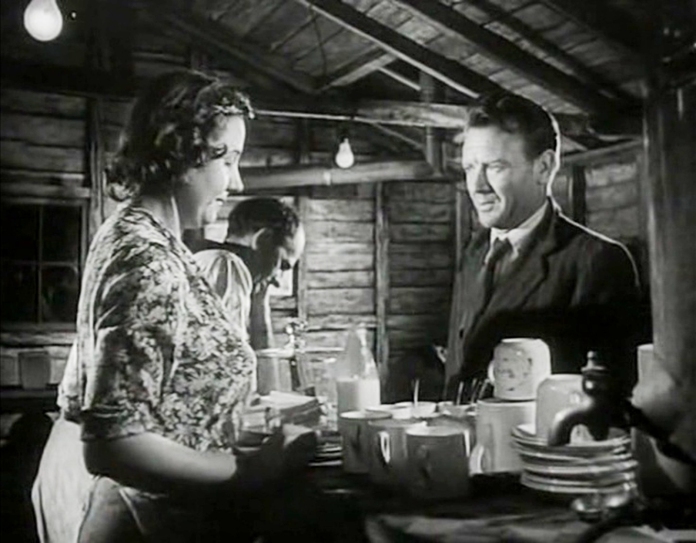 After his release, Phillip finds that Captain Driver drank himself to death, Fay has married the detective on the case, Bob Lowther (John McCallum), and become a middle-class housewife, and Pewsey, a middle-aged wreck, has recently left his own wife (Thora Hird) for a younger mistress (Mary Mackenzie). Phillip also soon finds himself the target of two more pieces of unwanted attention—one from a newspaper reporter, Andrew Craig (Geoffrey Keen), who finds himself in an ethical bind in needing to please his noxious editor (Laurence Naismith) but becoming increasingly disturbed about harassing an already tortured man and the other from Ilse (Eva Bergh), a refugee girl who works in the incredibly sleazy nearby diner, whom Phillip saves from rape by a sailor. It’s the first kind thing anyone’s done for her in years, and Ilse falls hopelessly in love.

The Long Memory is fascinating for many reasons, not the least of which is its gloriously seedy evocation of a post-industrial, post-war wasteland inhabited by wronged men, waifish but gorgeous refugees, brain-addled palookas, dim-witted waitresses, braying-voiced tarts, effeminate hermits, shadowy criminal networks, and rancid alcoholics. The estuary is a smoky, lonely, flat, muddy place, a literal vision of the mood of desolation that fuelled the post-war work of Samuel Beckett. City lights twinkle in the distance. Ships pass by constantly, their horns singing of far-off places. In the diner, everyone has a mystery concealed by raincoats and hunched shoulders— Phillip with his dark mission, the policeman following him, the agents for the mysterious criminal activity swirling about the estuary. 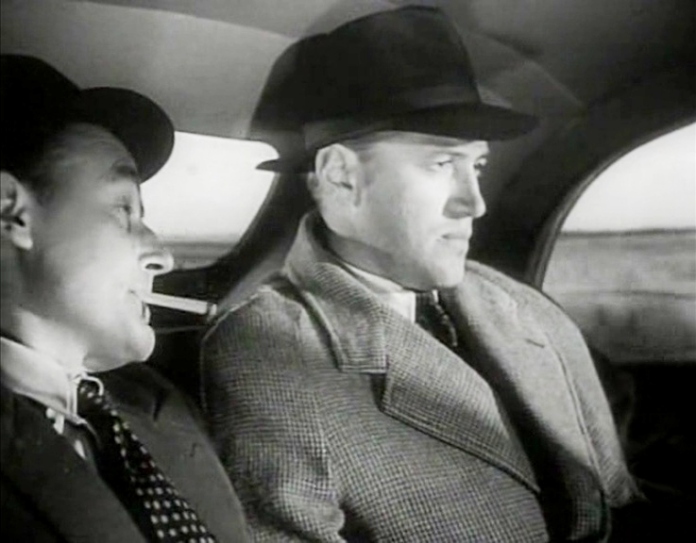 This world is contrasted starkly and incisively with the middle-class realm that Lowther inhabits and defends, and to which Fay has married up. Hoping to hover in dutiful nicety, Lowther and Fay are slowly dragged back down into the muck by secrets and guilt. Hamer brilliantly cuts between two couplings in separate beds—Phillip and Ilse, who forlornly attempts to break through Phillip’s shield of misanthropy, and Fay and Lowther, with Lowther prodding at and finally breaking her shield of lies. The contrast in the surroundings—the first couple’s squalor, the second’s refined security—cruelly highlights the similarity of their interactions.

Like many true noir films, The Long Memory is about people trying to cling to existence and their humanity; crime is a negative expression of their desires. There’s the suggestion Captain Driver fell into the most disgraceful end of his business, having started off aiding IRA soldiers. The most humorous scene in the film shows Hird’s Mrs. Pewsey barging in on her husband and his lover to rub down his chest to relieve his yearly attack of allergies. Her brusque devotion contrasts with his grousing: “Women! Bad enough having one, now I’ve got two of ’em!” The film is driven as much by Lowther’s pained attempts to both do right by his job and wife as it is by Phillip’s narrative, building to a key moment. The superintendent paces his bedroom, musing sadly that he probably always knew Phillip was innocent, and later confirms to Fay that “I stood on that corner three weekends running,” hoping to bump into herl.

Ilse struggles to find the inherently kind man in Phillip that keeps emerging briefly (in the flashback, Phillip was wearing a cricket jumper, shorthand to tell us what a naïve middle-class git he originally was). When he discovers Fay’s duplicity, Lowther feels bound to make things right for Davidson, even if it means him losing his job, her imprisonment—the total devastation of their bourgeois security. “We don’t want anything as a large as (justice),” Ilse states, in riposte, “just the right to exist.” It also anticipates the modern shift from viewing the media as heroes to media as muckraking scum. Craig at first gets on the wrong side of Phillip when, irritated by his manner, he makes a snide joke. Phillip gives him a shove and plunges into the hold of the barge. But Craig has a wryly idealistic view of his job. “Do you realise that we represent the two great guardians of the public interest?” he asks Lowther, whose dour reply is “We’ll talk about that some other time,” and later considers having arresting him as a nuisance. 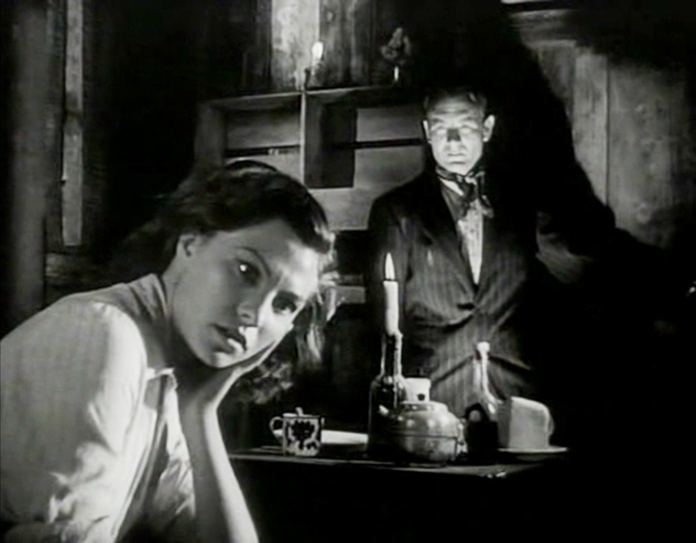 As Craig becomes more affected by the story, he finishes by snarling at his editor, “People’s lives add up to more than a few lines of print!” The editor snidely responds, “Don’t forget to take your halo with you,” before telling another journalist (Peter Jones) to make Davidson’s story into “something to read on a rainy afternoon.” The journalist does that by feeding Phillip Fay’s address. Ironically, Phillip loses the urge to take violent revenge, encouraged by his growing attachment to Ilse. “I suddenly realised,” he states to Fay, “all this time I’d been nursing a hatred for a great villainess, but when you opened the door, I only saw a tawdry little coward.” Phillip has already terrorized Pewsey into making a statement of his innocence simply by standing outside his door all night.

The emphasis of the film is on Phillip’s journey from glowering, vengeful outcast back to a man of moral fortitude and love of life, but it also offers a last twist to ensure an action climax. Phillip discovers that Boyd is still alive and running the shady smuggling activities simmering in the background. When Phillip confronts Boyd, he sets about beating the crap out of his nemesis, but can’t follow it through. “Revenge is just not worth it. It makes you feel just as filthy as the other fellow. And I’d hate to feel as filthy as you.” It’s a near fatal hesitation. Boyd shoots him through the arm and pursues him to his barge home. The two men battle cat-and-mouse in the grimy, hulk-littered mud, as Lowther, Ilse, Craig, and the police race to the rescue.

Mills had previously played a neurotic noir hero in the superb The October Man (1947), penned by Eric Ambler, giving him a thankful break from playing bright-eyed Cockney lads and upright military heroes. But Mills is at his most down-and-dirty in The Long Memory, convincingly embittered and more often than not a jerk, yet still unable to completely suppress his charm and likeability. The main weakness of the film is Elisabeth Sellers as Fay. Although Sellers was a fair actress and does Fay’s foundering despair well, she couldn’t effectively portray the opportunist scrubber lurking underneath Fay’s bourgeois enamel—in the flashback she’s a dull caricature of the girl your mother told you to stay away from. John McCallum, who was married to ’30s starlet Googie Withers, is a prime portrait in English psychology, affecting as the appropriately tight-assed and yet strangely ardent Lowther. Around them, some of Britain’s great character actors (Hird, Keen, Naismith, Chandos) prove why they are great.