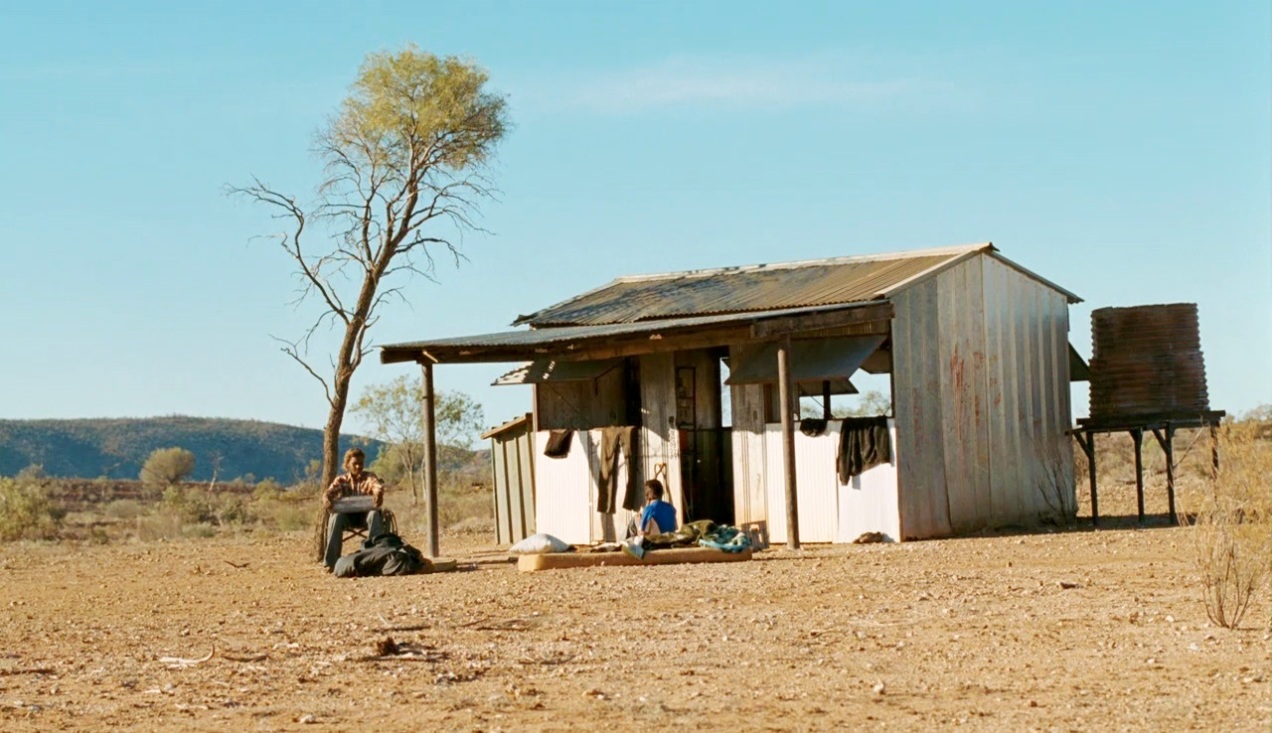 In its poetically sparse, yet intimately realistic first 45 minutes, Warwick Thornton’s debut feature film, which won the Camera d’Or prize at Cannes this year, is an account of two indigenous youths, the incommunicative, paint-sniffing Samson (Rowan McNamara), and Delilah (Marissa Gibson), the timid helpmate of her grandmother (Mitjili Napanangka Gibson), a painter. They subsist in a tiny, outback hamlet populated mostly by other aboriginal folk. Samson is living in his empty shack of a house with his brother (Matthew Gibson), whose incessantly practising ska band constantly irritate Samson. Samson longs to play rock ‘n’ roll guitar, and listens to the lone radio channel that plays country songs. Delilah maintains her grandmother’s regimen of medication and helps her create the sprawling, native-style paintings that she sells to a local storekeeper (Peter Bartlett) to live.

Thornton is an indigenous Australian himself, and his reflexive compassion and feel for the milieu he conjures is immediately apparent, perceiving the reality that’s hard to communicate to anyone who doesn’t live it: the intense, grinding boredom and bubbling frustration of fringe dwelling. The elliptical early scenes describe daily impossibility, neither especially threatening nor offering any apparent purpose, as Samson wakes each morning, takes a long whiff of paint, and heads out to take up his brother’s guitar and strum tuneless riffs before having its snatched away. Delilah goes through the morning ritual of making her grandmother take her pills, helping her work, and buying and cooking scant groceries before retreating at night into a neighbour’s car to listen to a cassette of flamenco songs. Samson has his eye on Delilah, tossing stones at her in a huff, and writing misspelt romantic entreaties on the wall before tiring of his brother’s company and moving himself uninvited into the compound surrounding Delilah’s house. Grandmother keeps laughingly referring to him as Delilah’s “husband,” whilst the girl keeps irritably tossing Samson’s bedclothes over the fence.

Details are offered in cryptic snatches: only towards the end does it become clear that Samson’s sullen silence is motivated by a severe stutter and the fact that his father is in prison. Finally, the tenuous balance of life in the hamlet crumbles when Grandmother dies. Delilah cuts off her hair in mourning, but despite her conscientious care of her aged relative, a trio of the local elder women beat her with sticks in punishment for not doing enough. Samson, maddened, loses his temper and clobbers his brother over the head with a log before and then smashes his guitar. His brother, when he comes around, gives Samson a severe hiding, which doesn’t quell his eddying, frustrated violence. Samson finally steals a visitor’s truck, coaxes Delilah into it, and they flee to a larger town where they end up sleeping under a bridge alongside rambling alcoholic Gonzo (Scott Thornton). Samson moves on from paint to petrol, and Delilah vainly attempts to generate some cash by stealing art supplies, making her own paintings, and trying to sell them to an uninterested gallery owner and tourists. 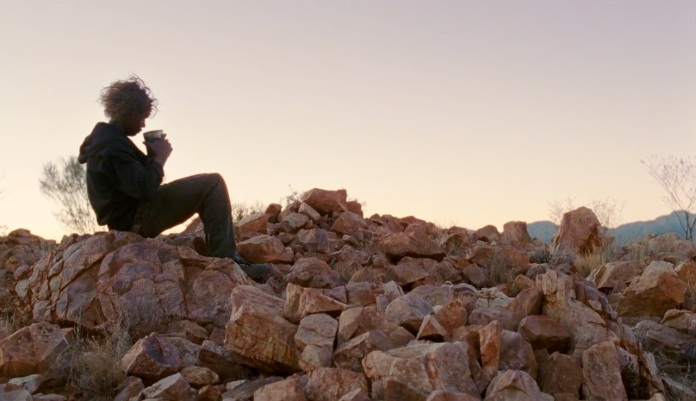 Samson & Delilah is virtually a work of Aussie neorealism, and as a piece of visual storytelling, it is rich and absorbing. Thornton’s a truly excellent cinematographer, even if, like many contemporary Aussie directors, he consistently mistakes pretty pictures for vital cinema. It’s also the sort of film that shouldn’t be overrated: it’s not a deep, mysterious, penetrating work of art, but a minimalist melodrama in the garb of dispassionate humanism. Thornton’s story and style would probably have been better applied to a short subject rather than padded out to 100 minutes (but then, of course, no one would have seen it). The fresh and well-handled first half gives way to a second half that, whilst maintaining the stoic quiet of the early portion, still gives into more than one problem of the conscience-provoking genre—counting off potential abuses and humiliations like a checklist. Once the title characters reach town, the narrative catalogues how Delilah’s efforts to sell her paintings are rebuffed and her visit to a church cut short by the chilly attention of a pastor. Then for good measure, she’s grabbed off the street and bundled into a car to be beaten and presumably raped by a gang of Anglo boys, and then hit by a car, whilst Samson wanders on in his substance-altered dissociation.

Thornton stages the kidnapping with Samson in the foreground, completely spaced out, as Delilah is snatched away behind him. He’s so fond of this shot that he repeats it a few minutes later when Delilah is hit by a car; it becomes clear that Thornton’s run out of convincing twists to sustain his simple narrative, revealing a lack of true inspiration in creating both a work of social conscience and portraiture. He then pulls a clammy stunt in letting Samson, and the audience, think Delilah is dead, inspiring the boy to take refuge in a crippling petrol binge before she turns up, bathed in heavenly light, her leg in a brace, having gotten his brother to bring a car and pick him up. Rather than return to their old hamlet, where the same ranting elder women want now to beat up Samson for stealing the truck, Delilah takes him out to a shack on her grandmother’s tribal land to recuperate. 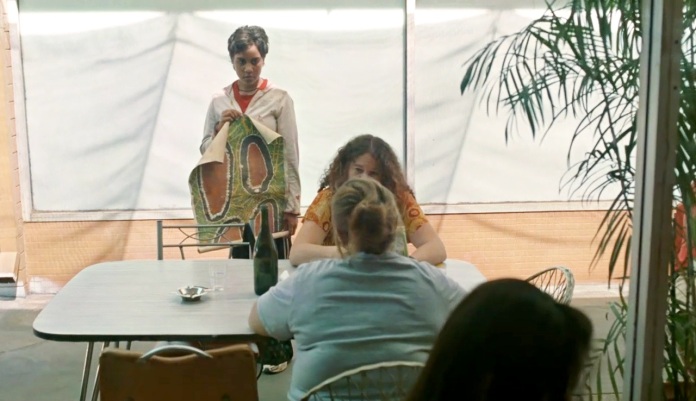 Thornton has no characterisation of substance to offer, and, like Philip Noyce’s Rabbit-Proof Fence (2001), presents a simplistic set of indigenous protagonists, blank canvasses onto whom any amount of indignation, empathy, and sociologically knowing interpretations can be projected. He hurts his narrative rigour with unexplained and sloppy conveniences, like how Delilah’s self-shorn locks, sliced off with a kitchen knife, come to be pruned back to comely evenness, or who provides the 4WD in which they gallivant in the final few scenes. There’s a strong reek of faux-Dickensian sentimentality in a lot of works about the indigenous experience, and Thornton doesn’t escape it entirely. Gonzo is one of those characters so beloved of filmmakers—the ranting loony who’s also the voice of wisdom and experience, singing folky protest songs to himself. 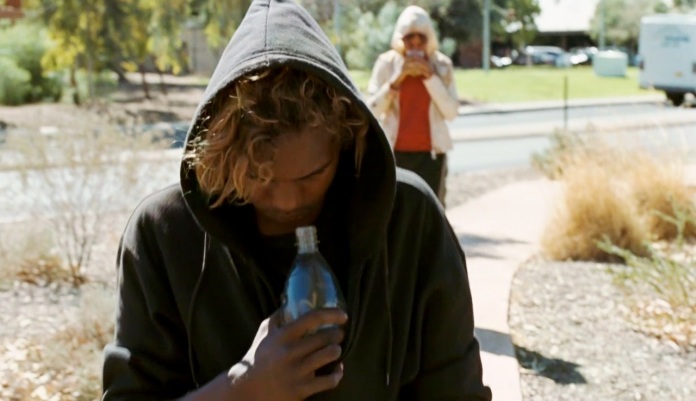 Worse yet, there’s a half-baked religious allegory recurring throughout the piece, signaled first, of course, in the characters’ names and in the motif of hair-cutting that has no link of significance to the biblical tale at all. Delilah is intimidated into leaving a church in the town by a silent pastor, but Gonzo finally announces that he’s going to give up booze and camping out in favour of living with a “mob’a Christians.” Finally when the young couple retreat to their shack, Delilah hangs up a homemade cross. But Thornton isn’t Robert Bresson, the meaning of these flourishes in relation to the characters and their sense of life isn’t explicated, and so it dances perilously close to a “Jesus Saves” message. Still, he’s evenhanded, finding little more dignity and sense in the ranting tribal women’s punishments than in the frigid demeanour of sparkly suburban white civilisation.

Thornton’s film is, finally, at least far better than some other stabs at portraying contemporary indigenous life in recent years, like the awkward Blackfellas (1993) and tepid Drifting Clouds (2002) (and a thankful curative for the lingering bitterness of Baz Luhrmann’s truly appalling Australia, 2008), as Thornton initially escapes the pitfalls of much of this type of filmmaking by relying as much as possible on imagery and providing scant dialogue to trip up inexperienced actors. The narrative is broadly similar to the decade’s best Australian film, Cate Shortland’s Somersault (2004), in portraying young outcasts at the mercy of both wayward personal impulses and Darwinian social mores. But unlike in Shortland’s film, its characters remain hazy, and it’s not something I’m going to let slide just because it’s about young aboriginal characters. It always seems to me, rather, that such characterisations tend to confirm the old racist clichés of indigenous peoples being simpler, less sophisticated, innocent beings, which is the sort of thing these films are supposed contradict. In this way, despite Thornton’s initially smart choices, the film ultimately doesn’t add up to anything truly affecting. Nonetheless, for its fine first half, and for the strength of Thornton’s filmmaking, Samson & Delilah stands ahead of the pack of the recent Aussie cinema.