.
aka Black Sunday ; The Mask of Satan ; House of Fright ; Revenge of the Vampire 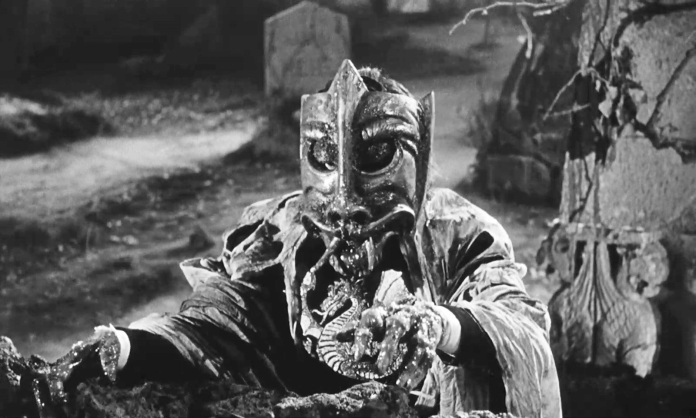 Mario Bava, ace cinematographer, had filled in as director on his mentor Riccardo Freda’s I Vampiri (1956), the film many horror genre scholars see as the first of a nascent explosion in the genre’s popularity that barely receded until the mid 1980s. Bava was the son of a sculptor and film effects pioneer Eugenio Bava, and had wanted to be a painter himself. But he, too, moved into movies and became a respected director of photography, working for the likes of Rossellini and De Sica. He had also made some short documentaries in the ’40s. The low budgets and strict shooting schedules of Italian genre film often overwhelmed directors and crews, and Bava had proven himself able at picking up the pieces. He had done so on I Vampiri, when Freda, frustrated, had walked off the set, forcing Bava to finish the film in two days. Bava had also contributed to several films as second-unit or fill-in director. In 1960, he finally made his first lone, credited foray into directing at the age of 46, La Maschera del Demonio.

Some horror critics feel La Maschera del Demonio is Bava’s best film. It certainly exemplified a richness of style nigh untouched at the time by other genre filmmakers, pulsing with inventive cinema and making an immediate impact. In what was becoming common practice, foreign actors were imported to sell Italian genre films overseas. For horror films whose makers were attempting to pass them off as Hammer product, British actors, rather than Americans like Steve Reeves, were hired. For his debut, Bava picked up John Richardson, whose greatest claim to fame would be to act alongside Raquel Welch in One Million B.C. (1967), and a young actress whose appearances thus far had been restricted to four rather small roles in her native land—Barbara Steele. The story is loosely based on a Nokolai Gogol short story, “The Vij,” (later filmed more faithfully in 1967 in the Soviet Union) and Gogol’s work itself was adapted distantly from folk tales collected by early Christian scholar Saint John Cassian.

The startling opening is worth noting for confronting violence. Around this time, horror films were becoming vehicles for a fresh, increasingly manifest social and historical cynicism, and were exploiting looser censorship with newly charged depictions of gore that anticipated the interests of the 1960s, when more revolutionary fantasies were taking grip. There is quite a gulf between the relatively distant fantasies of German Expressionism and Universal horror and that more direct impulses toward attacking social order in horror at the time. Terence Fisher had begun actively eviscerating historical iniquity in his Hammer films, Alfred Hitchcock tried to capture the shocking texture of sudden violence and incipient madness in Psycho (1960), Michael Powell had meditated on the relationship between voyeurism and brutality with Peeping Tom (1960), and Georges Franju had made his explicitly antipatriarchal parable Eyes Without a Face (1959).

To this Bava now added a direct approach to historical misogyny and warped religious concepts of femininity and virtue, subjects rarely tackled before except by Carl Dreyer, one of intelligent horror’s strongest influences, in films like The Passion of Joan of Arc (1927) and Day of Wrath (1943). Bava begins at his most provocative, with a spectacle of Inquisition in old Moldavia. An accused witch, Princess Asa Vajda (Steele), and her brother (a detail obscured in the English-dubbed version), lover, and consort in evil, Javutich (Arturo Dominici), having been captured and condemned by soldiers and priests, are subjected to gruesome punishment. Javutich is already dead. Their other brother, Gryabi, acts as Grand Inquisitor, bringing this relentless annihilation upon them. Asa begs for Satan’s aid to return from the grave and punish her tormenters, which include her own father. She is, in short order, branded, and has a “devil’s mask”—a grotesquely spiked object designed to eternally identify her as a Satanic being— pounded onto her face with a sledgehammer.

The sickening force of the blow and the blood that flows from her face is gross enough, but Bava makes sure we hear her moans that tell us she survives this torture. Following this, she is to burn at the stake, but a furious wind and rainstorm prevent it. Instead, she is interred in her family crypt under a repressing cross, and Javutich is buried. Two centuries later, figures of modern, masculine rationality, embodied by Doctor Choma Kruvajan (Andrea Checchi) and his young assistant, Andrei Gorobek (Richardson), travel the region. Their carriage throws a wheel, and whilst their jittery driver fixes it, they venture into a nearby ruin of a church.

Vaguely aware of Asa’s legend, the two scientists discover her sarcophagus and can’t resist opening it, tugging off the devil’s mask to reveal her face, riddled with holes and with the eyes rotten away but still surprisingly intact. Kruvajan cuts himself, of course, and blood spills on Asa’s corpse. As they leave the church, they are startled to happen upon a young woman with a mastiff blocking their exit, the very image of the witch. But this is her descendent Katia Vaida (Steele again), who makes eye contact with the handsome and young Richardson, and bids them go in peace. But peace is short-lived—Asa has been revived by the blood. She summons Javutich from his grave, which he digs his way out of, and he sets about aiding Asa’s vengeance on her family, including Katia; her father, Prince Vajda (Ivo Garrani); and her brother Constantine (Enrico Olivieri).

La Maschera was a prestige effort for Galatea Studios, which gave Bava an uncommonly long six weeks to make the film. Bava used the time well, setting up some impressively complex and innovative camerawork. Despite this, it has a number of the regulation cheesy moments of horror films of the time, notably a bat the size of Rodan that attacks Kruvajin. AIP bought the film and hacked it about considerably, dubbing a lousy Les Baxter score over it and changing the title to Black Sunday. Nonetheless, they were paid off with a big hit. The film became an immediate template to steal from, so that works like Freda’s L’Orribile Segreto del Dr. Hichcock, Corman’s Pit and the Pendulum (1961), John Moxey’s City of the Dead, and others filched its plot and imagery to the point where it looks clichéd now. 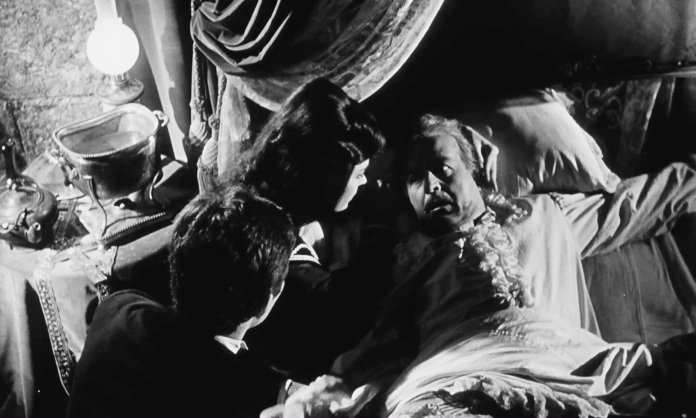 The shoot was beset with script difficulties that Bava doesn’t entirely paper over. But like Hitchcock, Buñuel, and Lang before him, and Argento and De Palma after him, Bava was the kind of cinematic shaman whose belief in the power of images subverted dramatic standards. Scenes in La Maschera dazzle the eye and imagination; Katia, framed by the shattered doorway of the church, holding two dogs on leashes; Javutich slowly breaking his way out of his tomb and lumbering out into the night; the nocturnal progress of the Vajdas’ coach, appropriated by Javutich, making its ghostly passage through the night fog; the gently gliding camera that observes the Vajda family in their castle, a Byzantine environment of great carvings and paintings; Asa, partly revived, calling for Kruvajin to become her lover and the middle-aged intellectual instantly enslaved; Prince Vajda discovered gnarled and masticated; Asa sucking out Katia’s lifeforce to rejuvenate herself.

It’s wonderful to watch Bava save the genre from the mercenary insipidness that had, apart from rare exceptions, afflicted the style of horror films for two decades after the dizzying stylistic heights of films like Nosferatu (1922), Bride of Frankenstein (1935), and Vampyr (1932). Bava enters the gothic realm wholeheartedly, employing some newer, sophisticated camera techniques, like slow motion, which had barely, if ever, been used before by genre directors. He also employs some devilishly clever, exceedingly simple special effects, like the slowing regrowing eyes that fill Asa’s sockets, and the infrared make-up effect used when Asa leeches off Katia. Maschera also leapt wholeheartedly into another, perhaps ultimately less salutary, trend, towards strong violence and raw corporeal effect. Asa’s branding and masking, Vajda’s masticated corpse, and Kruvajin’s scorched face all represent the new frontier for gore in the genre. Much of this had to be edited out of the AIP cut, and the film was refused a certificate altogether in Britain, where it was not released uncut until 1992.

With his tales of rampant killers driven beyond all reason to wipe out everyone who taunts their illusory desires, like Sei Donne per l’Assassino (1964) and Ecologia del Delitto (1973), Bava probably did more than any other horror director other than Hitchcock to invent a modern genre; La Maschera, with its Gothic style and themes, might seem backwards-looking by comparison to some of his later work. Bava also had gifts that invited a larger stage than he ever achieved. But Bava was born to make horror films, not merely because of his talent at creating pitch-perfect mise en scène, but because of his insistent interest in the notion of repressed feelings, passions, and ideas rudely returning to enfold and ensnare the present. 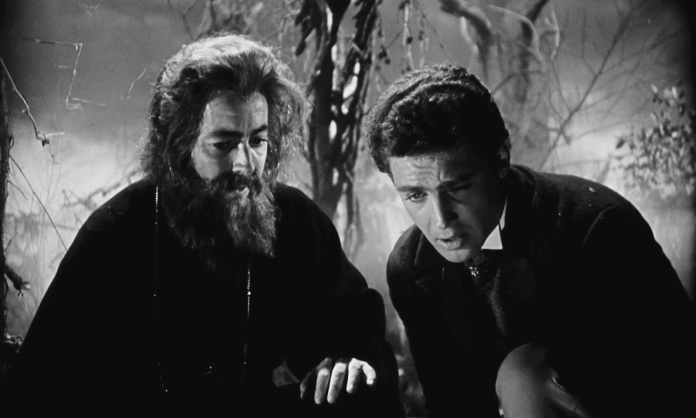 Such a notion is, indeed, fundamental to the genre. But perhaps no other filmmaker maintained such a relentless interest in expressing the idea, especially through incestuous families, fuelling the narratives of this film, Operazione Paura (1966), Lisa i en Diavoli (1972), and Shock! (1977). Sexual passion, particularly, keeps resurging in warped ways; condemned in an act of patriarchal repression; Asa is a raw, seething body of sexuality that refuses to die, determined to ensnare all who approach her, and to steal the flesh of the virginal Katia. The image of Asa, lying on her bier, face pocked with unholy holes, writhing like a lustful leech, her fingers clawing and flexing with rapacious need, seducing Kruvajin, isn’t quickly forgotten. 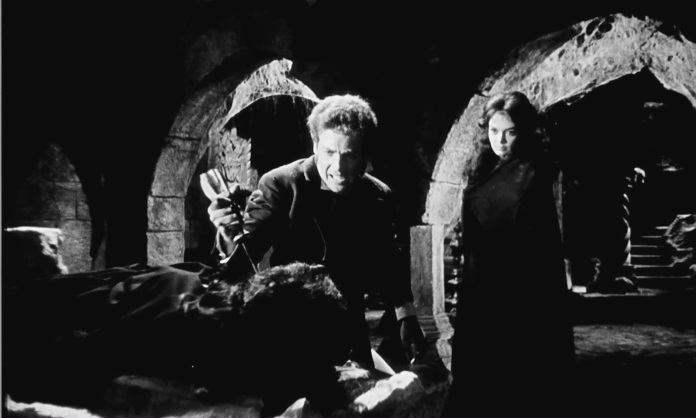 Steele is an incalculable asset. Her perverse beauty, with her ability to project gradations in intensely weird emotions, from virginal insensibility to insatiable cruelty to rampant madness, instantly became emblematic of the genre—and made her verboten for mainstream cinema. Even Fellini could only manage to cast her as a kooky beatnik in 8½ (1963). Steele was a cunning actress and a hipster with a feminist bent. As such she was entirely hip to Bava’s approach, and would later express cutting opinions on the degeneration of the genre into misogynistic slasher films. She expertly presents distinct characterizations of innocent, doe-like Katia and the powerfully perverse Asa. She is the centre of the film, far more than the heroes Andrei and Constantine, who, as is often the case in Bava, are present as a requirement, but are so wooden and conventional they practically disappear. If there’s a disappointment to La Maschera, it’s that it ends too conventionally. Asa, unlike a lot of subsequent movie monsters, actually is cool and interesting enough to win.