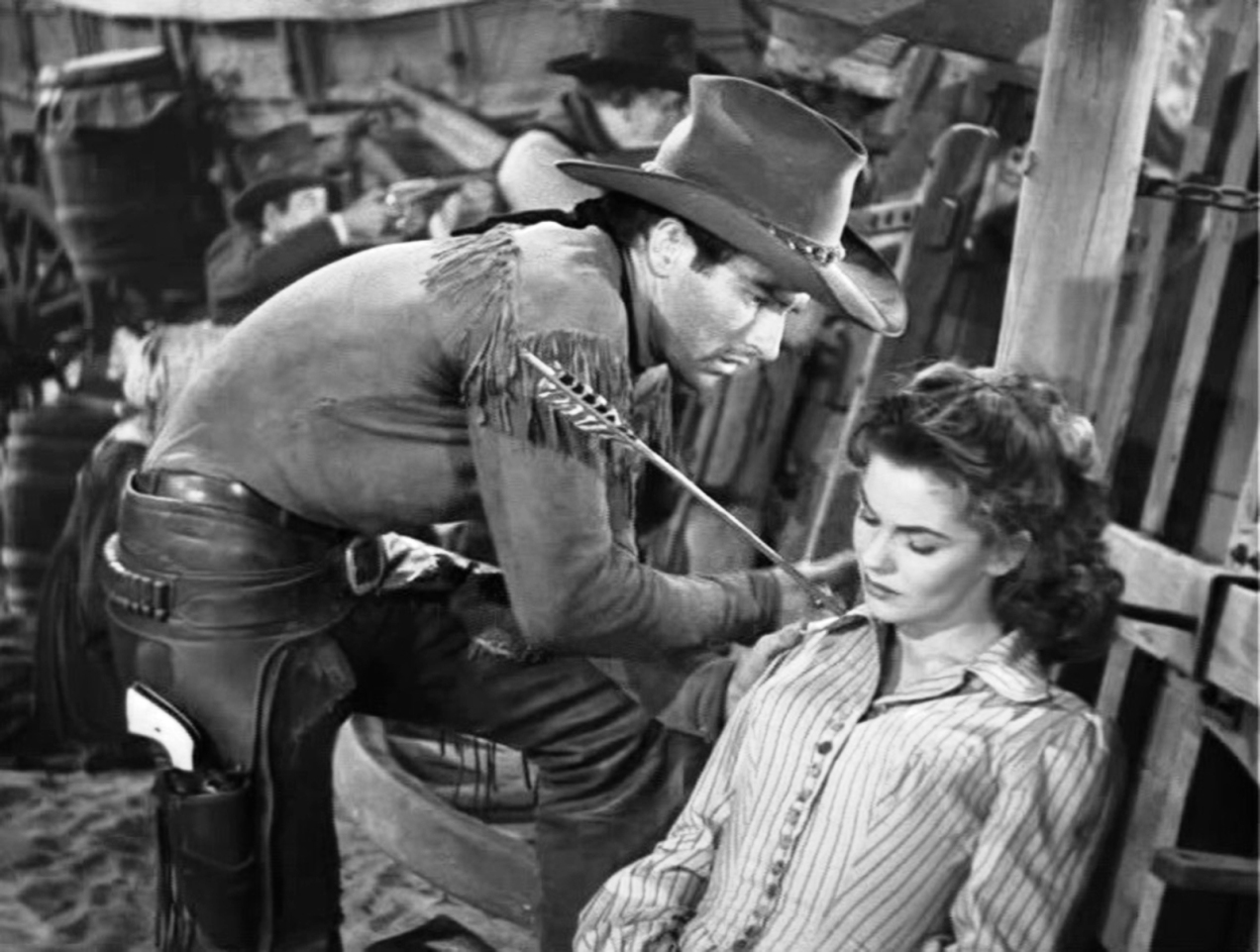 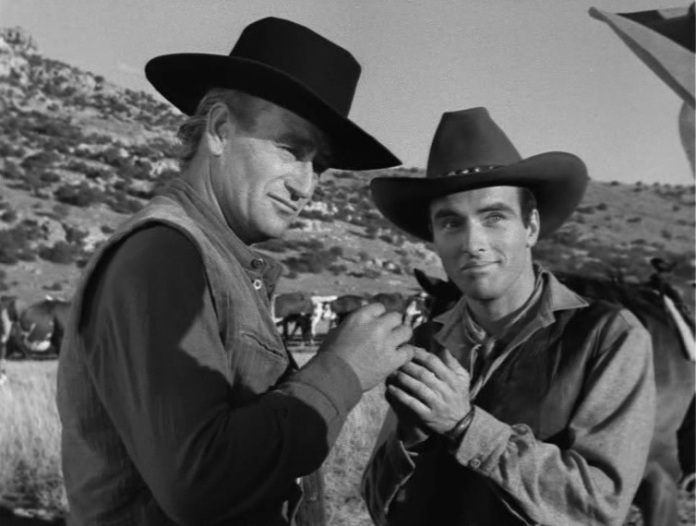 A young actor first appears on the screen in Red River, listening with a kind of wide-eyed, excited, but strictly measured attention. It’s Montgomery Clift, a wonder boy fresh from a Broadway splash, suddenly thrust into cowboy gear and standing between two other actors, John Wayne and Walter Brennan, constituting a trio of actors it’s almost impossible to find more diverse. Star-making debut performances, where a fresh talent arrives immediately and permanently in a leading role, like Clift here, or Marlon Brando in The Men, or Katharine Hepburn’s in A Bill of Divorcement, don’t come along so often these days. That’s largely because the kind of career momentum actors might build up on, say, the Broadway stage and transfer directly to the screen, or the careful grooming by an industry sponsor, is nonexistent now; almost every actor has done a spot of TV or film work in building a career. Even for Clift, there were some wrinkles in his swift promotion to screen stardom. Red River, his first feature starring role, was filmed in 1946, but held back from release for nearly two years. So the public at large first saw him in Fred Zinnemann’s 1948 film The Search. 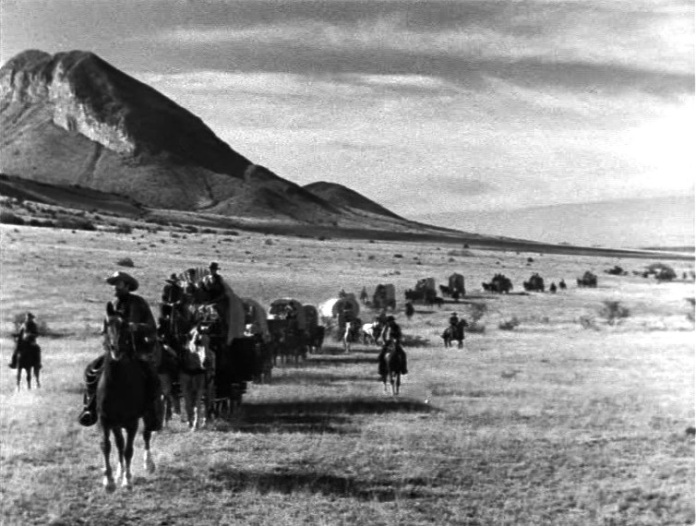 Red River needs little introduction as one of the cinema’s great Westerns, a frontier myth easily described as a variation on Mutiny on the Bounty reset on the range. However, as was director Hawks’ way, the drama is essentially a study of the intricacies of human relationships and the essential ambiguity of morality as it meshes with character. In this way, the tyrannical captain of the great cattle drive, Thomas Dunston (John Wayne), is not a cardboard figure of sadistic power, but a haunted, embittered patriarch whose ever-greater efforts to hold onto his dream see it slip further and further away. It’s only saved by his adopted son, Matthew Garth (Clift), who risks his neck and a prickly kind of love with the older man to save it for all of them, their surrogate grandfather Groot Nadine (Walter Brennan), and the men who entrust them with their lives and livelihoods. Matthew and Dunston come into conflict when Matthew intervenes to save the lives of men Dunston wants to hang for trying to bail out on his great, desperate quest.

It’s hard not read subtext into Red River. Hawks’ films are generally typified as being about men doing manly things, idealizing masculine codes of behavior espousing stoic taciturnity and economy of emotion, virtually verboten in modern pop culture. Yet Hawks loved to explore ambiguities in such behavior. Men who had flunked the code, like Richard Barthelmess in Only Angels Have Wings, could yet live up to it; other men, who seem to exemplify it, end up flunking badly, like Dunston here. Then there is, of course, the famous Hawksian lady, here embodied with steely verve by Joanne Dru as Tess Millay, a dancer hooked up with a wagon train of gamblers and prostitutes heading to set up a proto-Vegas, and also by Fen (Coleen Gray), as the lady love Dunston loses early in the film.

The central clash of characters between Dunston and Matthew drives the entire film, though so much of its visual rhetoric seems merely to be about shifting cattle across the land. It’s vital because the question of the film is this: though this is man’s work, and the country a man’s country, what kind of man is the best at fulfilling this near-Homeric quest? A repetition in the narrative places Dunston and Matthew in their respective, divided positions. Both meet their true loves in wagon trains (which move east to west, whereas the cattle drive moves south to north). But Dunston walks away from the train, only to see it and his lady burn. Dunston thus turns his back on the steady march of civilization, and heads out into the wilderness without women or laws or religion or comfort to forge an empire in the Texas plains. His kind is needed to begin this great project, this American range. Matthew rides to the rescue of another wagon train that is under attack by Indians, and saves Tess in the process of rescuing the fruits of Dunston’s labor from himself. This is the crucial gap. Dunston is a destroyer, a quick draw pioneer who leaves behind civilization and womankind. Matthew’s kind is needed to complete the quest.

Hawks seems to have played on the fact that he cast a gay actor (or at least, acknowledging the fact he’s an awfully pretty one) in Matthew’s tangled relations with Dunston. Their relationship is mostly like that of a vengeful father who loves his son but wants him to grow up in the “right” way as his kind of authoritarian patriarch, independent and remote. And yet he casts Matthew, with his youth and beauty, as the closest thing to a woman in his life. He establishes these warring impulses, this sickly confusion of masculine and feminine qualities, by giving Matthew Fen’s wristband, not as a sexual surrogate, but as an emotional one. Nonetheless, Dunston ultimately casts Matthew in a feminine role and imbues him with a more complex identity fundamentally at odds with his own that he can’t stand when it makes itself apparent. The film makes a bold and valid point, that Dunston’s hyper-macho behavior, supposedly hard-headed and naturally effective, is, in fact, defined by hysteria, a wild, stunting refusal to regard human or natural concerns with acceptance.

Hawks seems to have been acutely aware of Clift’s new kind of energy. Replace him in the part with a more traditional male presence like Gregory Peck or Wayne himself 10 years earlier, and a lot of the film would instantly start seeming ridiculous. The film’s gay—or, more precisely, bi—subtext asserts itself when Matthew compares guns and shooting styles with Cherry Vallance (John Ireland), a more macho man but with a strikingly effeminate name, to Groot’s prediction that “that pair are certain to tangle some day.” Perhaps they do, but not in the fashion Groot means. Cherry becomes Matthew’s stalwart supporter, helping his coup against Dunston and later trying to intervene in their final clash, only to be swatted aside almost casually by Dunston. 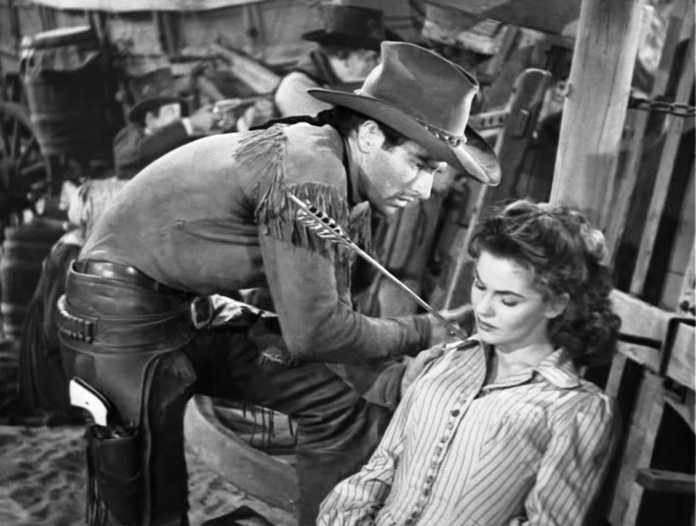 But Cherry is also a transitory companion for Matthew. Cherry splits up the double act when he goes searching for womankind, and instead ends up digging up one for Matthew. Later, it’s Cherry whom Tess relies on to learn about the man who taunts and intrigues her. If Tess, the Hawksian woman, combines a dose of masculinity with her femininity and creates an ideal, so, too, does Matthew prove that a man with a large dash of the feminine is equally ideal. His concern for others, his willingness to explore the road less traveled, his breadth of emotional reach make him a better, braver leader of men than Dunston in the end, when what is required is not the man who smashes and shoots and digs.

Clift developed a core persona in his starring roles as a man of febrile intelligence, passive manners, ill-fitting emotional and social status, possessed of civility and a hazy type of ambition. Because of this persona, he is presumed to be weak by the he-men, but when he finally fights back, he proves to have an iron character. This broadly fits his characters here and in I Confess, From Here to Eternity, The Young Lions, and Raintree County. His acting style later became striking for his capacity to portray high emotion subtly, as if he’s slicing off pieces of his soul one by one and feeding them into his art, at its height in A Place in the Sun and Judgment at Nuremburg. This force of will strains to crack that beautiful face, and after it was marred in his car accident, he became even more volatile as a portrayer of neurotics, shivering wrecks, and hurting, conscientious men. 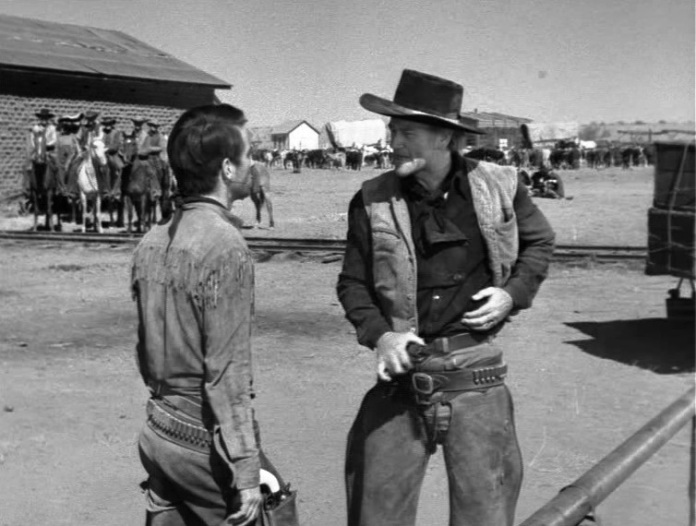 In Red River, he maintains the same cool taciturnity as the rest of the cast, except in his wide, intrigued eyes, receptive as radar dishes, soaking up detail, registering alternately amused, appalled, incensed, and finally unblinking in facing up to Dunston’s wrath. When he responds to Dunston’s plan to hang three deserters, “No, no you won’t,” he reads the line without melodrama or scowling, but with a clear, simple diction, establishing that he has reached a point of basic refusal. Indeed, Clift’s performance is largely defined by its stillness, his becalmed face and naturalistic postures. He does not mould his body and face to the demands of the screen, like Wayne with his adamantine grace, or to highlight the individuality of his character, like twitchy, rubber-faced Brennan, but rather to express the inner stylings of Matthew’s mind. His performance wells from within, requiring us to intuit his thinking and feeling. Although he was preceded in Hollywood by John Garfield and William Holden, Clift was the first of the vanguard Method actors to alter the energy of the cinema screen. To some extent, though, Clift also updates the fundamental approach of Gary Cooper, who also used stillness and intuition in his acting.

The film builds to a finale that is controversial in its swing from thunderous tension to comic anticlimax, as Dunston, on the warpath, cuts down Cherry and proceeds to taunt Matthew, every inch the alpha male set on abusing the girly-man usurper. Matthew is happy to remain passive when there’s a chance of them actually killing each other in the course of Dunston’s hysteria. Dunston instead starts to beat him. Matthew puts up with this for a while, until, finally, he hits back, with such startling force Dunston pitches back goggle-eyed and wide-mouthed. They begin pummeling each other until Tess breaks up their brawl by firing a gun in the dirt between them, angrily calling for an end to the spectacle. Groot delights in Matthew’s finally proving his grit to Dunston, but Tess recognizes he’s been drawn into playing Dunston’s game; she subverts their hyped-up masculinity by forcing both men to bow before a strong woman, and realize their differences are fundamentally childish. In this regard, the climax works.