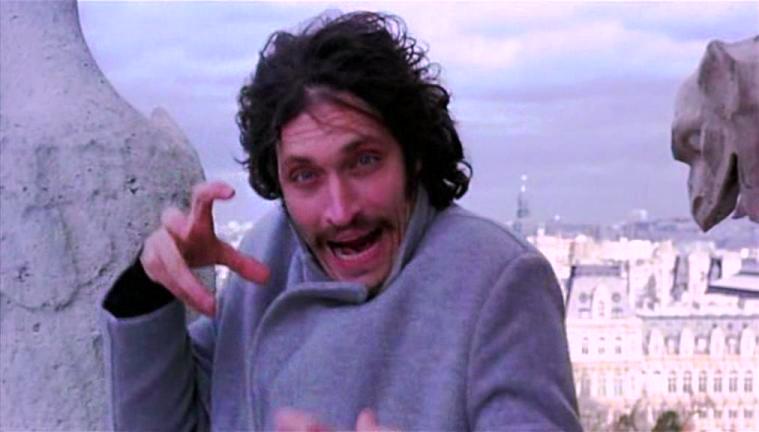 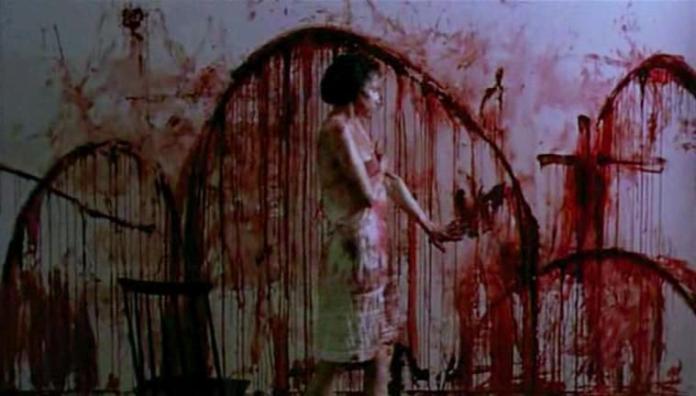 Claire Denis is one of the best directors working today, a maker of films that are poetic and cryptic, humanist and yet lacking illusions, fascinatingly artful and creatively evasive. Trouble Every Day is both a key Denis film and her most atypical work: the ugly violence and horror-movie motifs she explored in her much-discussed 2001 film stand in contrast to the fonder instincts she displayed in her other notable films of the decade, including Friday Night (2003) and 35 Rhums (2009). Some feel Trouble Every Day was the film that gave new impetus to the visceral, attention-seeking, but largely silly wave of extreme Euro-horror. But Trouble Every Day takes its place in Denis’ canon with ease, not only in style, and in the multifarious ways it explore human intimacy, but also in the extension of the notion presented more tangentially in Beau Travail (1999) of the human body as both an object of fetish and warfare.

In terms of pure story breakdown, Trouble Every Day toys with the essential ideas of many late ’70s European horror films, like the works of Lucio Fulci and Ruggiero Deodato, in which interloping white westerners who have travelled into foreign lands return infected with a taint that drives them to nihilistic violence. The literal plot is, however, only presented in tangential, hinted terms, the key occurrences having occurred long in the past, and the familiar patterns of those model stories are partly inverted. Trouble Every Day, both more exactingly grotesque and personal than many undeniably but often juvenilely brutal films, is also far more attuned to its protagonists as physical and moral entities.

Denis commences with a series of what appear barely connected events that all contain the threat of horror. A young woman (Béatrice Dalle), wandering the desolate outer suburbs of Paris, eyes a truck driver with evident sexual interest, and he responds; later, a motorcyclist (Alex Descas), coming across the man’s parked truck and the woman’s van, penetrates the vacant lot nearby and finds the man’s mangled body and the woman dissociated and caked in blood. Simultaneously, a newly married American couple, Dr. Shane Brown (Vincent Gallo) and his bride June (Tricia Vessey), arrive in Paris for their honeymoon, but only after Shane has locked himself in the plane toilet and had a panic attack whilst conjuring visions of June drenched in blood.

Denis’ peculiar, eliding film grammar, alive to the minatory pleasures found in the focused tranquility of a commute home from work, or the cigarette break when at one’s job, meshes here with her bizarre story to create a rare texture. The long prologue, consisting of decorous dissolves between shots of Paris at sunset, romantic and yet dark, sonorous, to the music of The Tindersticks (their soundtrack is generally admired, and rightly so), remakes Denis’ Paris as a depopulated, drowsy, faintly forbidding place, and much of the rest of the film is shot either early in the morning or in the late evening. Her purpose, to both evoke and undermine the romantic glaze of the city as one for lovers, is slow to congeal, but ineffaceable once done. Gallo’s own debt to what he learnt (or mislearnt, as some might have it, from Denis) for his own The Brown Bunny (2003) is evident in how he tried to counterpoint textures of grief, expressed in lingering images of ceaseless travel, with grossly intimate physicality and brutal discoveries. 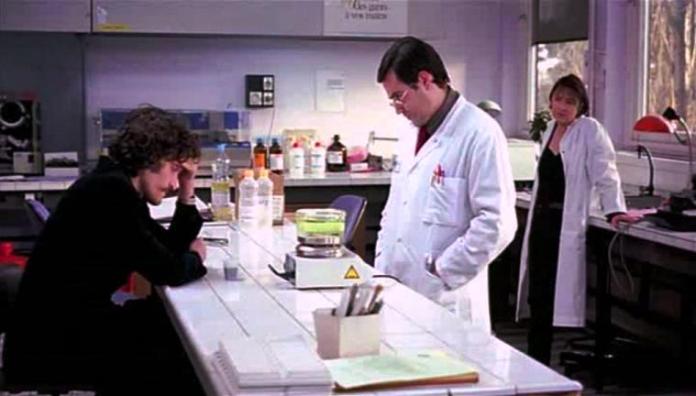 Slowly, the facts begin to solidify. The young woman glimpsed at the start is Coré Semenau, and the motorcyclist was her husband Leó, a doctor and former research fellow of Shane’s. Leó has dropped out of sight in the scientific research community because of his wife’s mysterious illness. Shane visits a lab where Leo used to work in attempting to find them, and he meets the sceptical reaction of one of Leó’s former colleagues about a theory of his that Shane is interested in following up on. A lab assistant, Malécot (Hélène Lapiower), contacts Shane later and gives him a lead as to where Leó and Coré have retreated. It is a large, old house that’s been fortified by Leó to try to keep Coré locked up, but every now and then she escapes, and he has to track her down, inevitably finding her next to another mangled body. In one of several hazy flashbacks that punctuate the film, Shane recalls an icy conversation with a fellow scientist, Friessen (Marilu Marini), in which he explained how he and Coré had an affair when they accompanied Leó on a jungle research expedition, and Shane also stole some of Leó’s data to advance his own career. But the darker secret soon reveals itself when two young men (Nicolas Duvauchelle and Raphaël Neal) break into Leó and Coré’s house, believing that because of the security it must contain all sorts of riches. One of them instead finds Coré, making a hot and sultry come-on, and he joins her in bed, where she commences to eat him. And that’s not a euphemism. 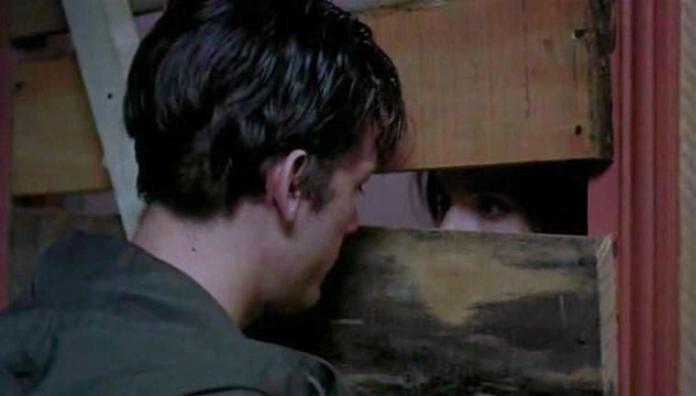 Denis’ films are often about patiently withheld secrets and veiled truths of great importance. Here, the hidden crux is monstrous. Coré and Shane both have a disease that drives them to acts of cannibalistic sadism when they engage in intercourse: desire portrayed as a literally carnivorous act. Shane’s keeping his disease partly controlled, but in his new, frustrating marriage he’s clearly being driven closer and closer to the edge of total enslavement to the disease that Coré is gripped by. The story evokes some classic metaphors and images of sexual anxiety, particularly in the scenes of the young men trying to penetrate that mysterious house and gain access to the woman who is raw passion personified, and, in the mythic tradition, the price to be paid for this transgression is not small. In its own hypermodernist way, then, Trouble Every Day is about taboos that are ancient and figurations that are primal. When the young man who will be Core’s last victim finds her eyeing him from behind wooden slats, he’s violating a sanctum, a common fairytale motif, and unleashing the contained yet always straining feminine libido (the similarity to Michael Cacoyannis’ vision of Helen contained in The Trojan Women leapt out at me).

The subsequent visions of Dalle—large teeth dripping gore like one of H. R. Giger’s aliens, laughing and toying with her prey who’s unable to fight off her supercharged strength, as she bites off his lips and slides fingers under flaps of skin, all the while giggling like a child—aren’t easily forgotten. Perhaps even more affecting, however, is the agonised spectacle of the perpetually unspeaking Leó trying to take care of his wife, who he loves in a deep, easily apparent fashion, in spite of all good sense, and Shane’s increasingly frail efforts to keep his wife from becoming the object of his own latent predatory tendencies. Questions of how people use each other, laden sometimes with both hate and love, bubble throughout. Denis’ taciturnity as an artist is actually one of her great strengths, and that’s readily apparent here as her galvanising efforts escape the facile inchoate provocations of Gaspar Noé and Lars Von Trier in trying to keep pace. Shane’s hunger for money (which he confesses through silence to Friessen) and for Coré, both of which meant fucking over (Afro-French) Leó, condenses forms of betrayal and exploitation, but Denis leaves this as a suggestive aspect of her drama. Simultaneously, whilst Denis is undoubtedly making an excellent horror movie, her approach both teases apart the fibre of old-fashioned mad scientist and vampire movies and restores and emphasises sensitivities usually excised from the gruelling modern genre. Shane’s mixture of unrequited passion and intense guilt is part and parcel with his disease, gnawing him from the inside out as much as the disease makes him and Coré gnaw on other people, and Shane’s killing of Coré, after she’s set fire to her house is part mercy killing, part self-defence, and part last-ditch effort to kill the animal in himself she embodies.

Denis’s fascination for layers of society interacting half-consciously in modern metropolitan life sees her segue now and then from the main drama to follow the maids in Shane and June’s hotel, women of various ages and states of being, and especially pretty, young Christelle (Florence Loiret-Caille). Denis follows Christelle as she’s dropped off in the morning by her boyfriend, pinches unused perks left in hotel rooms, and sprawls on the Browns’ bed when they’re both out for a cigarette. She catches Shane’s eye, and he catches her, so that when Shane tracks her into the maids’ locker room, the thrill of a quickie is nigh, but this turns inevitably into another grotesque assault, punctuated by the nightmarish image of Shane’s blood-smeared face rising from between Christelle’s legs and then kissing her, forcing her to taste her own blood. It’s as genuinely horrific a scene as cinema can offer, but one that, in ironically treading close to pornographic detail, avoids the pornographic thrill of a lot of modern horror movies, in which sexualised violence is presented through conveniently shallow characterisations. The idea that true terror lies at the end of a simple workday shift is all too resonant. Denis tries to encompass her bottom-of-the-barrel fantasia in just such a way that makes every cruel and kind act count, and in this way, Denis both heightens and reinforces the emotions that underpin many of her other films; but also the threat of damage individuals can do to each other hovers in those other works and explodes here.

Denis’ style might have felt a bit abstract, some of the power in her approach left untapped in trying just a little too hard to avoid the usual, if it wasn’t for the offhand wonder of moments like that in which June automatically helps Christelle make the bed in June and Shane’s hotel room, a telling moment of interaction; June’s not someone who’s used to or comfortable with being waited on, and also not one to let her bridal couch be usurped by anyone else, a point that has dreadful ramifications. Or the heartbreaking tenderness with which Leó cleans Coré after one of her murders. Or the polite yet remorseless way Friessen orders Shane out of her lab. Or the dark suggestiveness of Leó, and the audience, knowing what he’ll find when he spies blood dripping from stalks of grass in another of the vacant lots Coré uses as her killing ground. There’s a wonderful sequence in which Shane and June visit Notre Dame, Shane acting like the monster of traditional movieland as an overture to a magically romantic moment high in the towers, closing in for the most tender of clinches as the June’s headscarf blows away, a moment that renders her confused and despairing later reaction to Shane’s retreat to the bathroom to jerk off all the more palpable.

In offering a melodramatic set-up, Denis doesn’t quite deal with how this upsets the usual balance of her style, and outsized horror grazes against fragile humanity, contributing to the finally icy, alien chill the film gives off. I suppose that’s a comparatively small complaint, considering the undeniably powerful and quite brilliant film Denis wrought. The effect of Trouble Every Day sinks deep into the bones and doesn’t let go for hours after the chillingly curt coda. Denis manages to conjure what is at once a psychologically, physically, and metaphorically immediate sense of hell being other people.