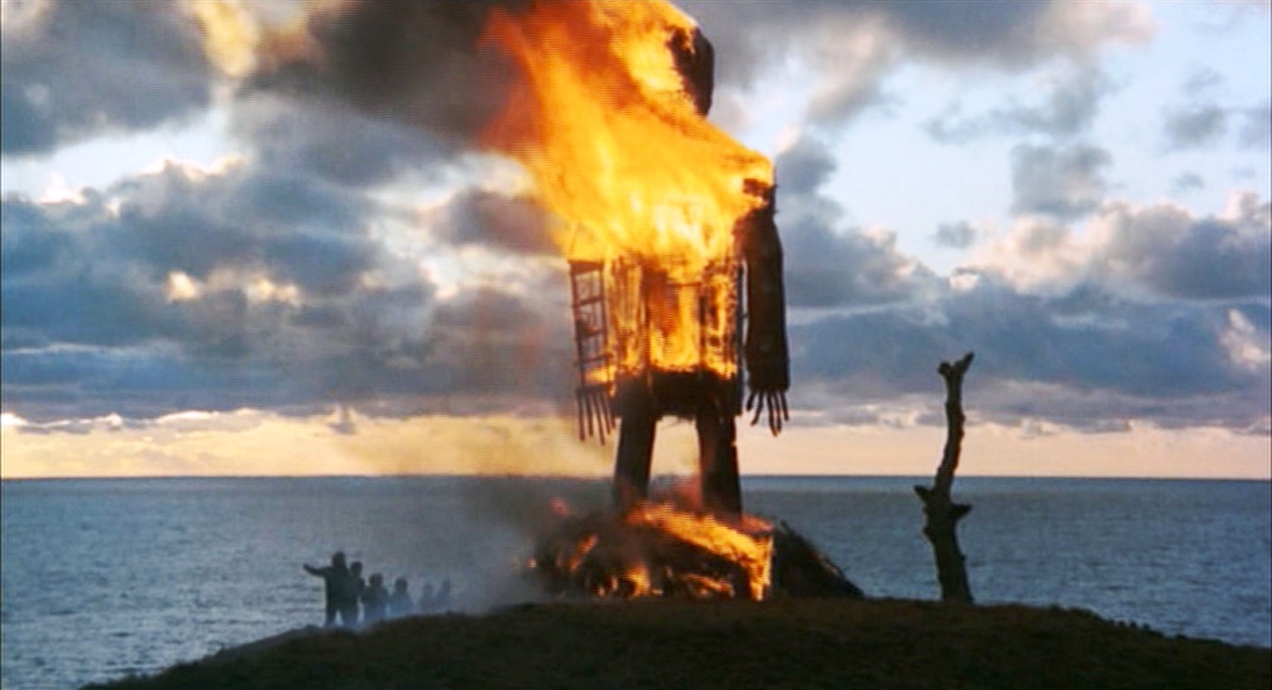 The Wicker Man is the sort of horror film that people who don’t like horror films embrace, and that can make people like me who do like horror films distrust it on principle. Still, Robin Hardy’s first, infamously mistreated film has infiltrated pop culture so much that of late its influence has been popping up in places as diverse as Brit songstress Allison Goldfrapp’s album Seventh Tree; Neil LaBute’s craptacular remake, which is swiftly gathering Mommie Dearest-esque status as a high-class camp classic; being referenced in Eli Roth’s Hostel; and ticking off neo-pagans who don’t like the implication that they enjoy burning Edward Woodward every now and then. It’s become a part of the landscape, its eerie, lo-fi antigothic lending a much-needed hit of cool to Morris dancers everywhere.

The actual film deserves it reputation as one of the cleverest and most subtly potent genre works of its era. Intense in a muted and menacing fashion, sophisticated in its rhythmic structure and steadily building disquiet, The Wicker Man was designed by screenwriter Anthony Shaffer and director Hardy, fans of the Hammer horror films, as an homage and a retort to works like Terence Fisher’s early Dracula entries, with their conflict of ironclad morality and sensualised evil. Much like the old joke about the priest who, having preached a great argument for God in the first half of his sermon, offers up the devil’s side in the second half, The Wicker Man manages to be a work that both pantheists and Christian moralists can get behind, building to a finale almost unique in any cinematic work, let alone the horror genre.

The Wicker Man is built around the traditional generic intrusion of a stranger of authority into a land of suspicious, superstitious yokels. Rather than bringing the clarity of enlightenment, however, Sergeant Howie (Woodward) offers arrogance and resentment, coming from a society that’s failing to meet his standards (his own junior officers make fun of him for keeping himself pure for his wedding day with his long-waiting girlfriend), and finding an island full of people who seem to be silently laughing at a joke he’s not in on. Summerisle, a privately owned island off the Scottish coast, is famous for its apples, and is generally off-limits to the outside world. The grandfather of its current owner, Lord Summerisle (Christopher Lee), purchased the island as the ideal place to grow his hybrid fruit strains and introduced the islanders to pantheistic worship to revive their love of life after centuries of grinding poverty.

Howie’s arrival to investigate is brought about by an anonymous letter reporting that a young girl, Rowan Morrison (Geraldine Cowper), has disappeared and not been seen for months. And yet, even her mother (Irene Sunters) denies any knowledge of her. The more Howie digs, the more confused he becomes; when he finds the girl did exist and yet seems to have died, he exhumes her grave and discovers only a dead hare in her coffin. Gradually, he forms a dreadful theory; that Rowan will be sacrificed at the May Day festival to appease the gods that have withered the previous year’s harvest. The closer he comes to the momentous event, the more subtly strange the situation becomes, as apparently perfectly ordinary villagers dress up in playful animal costumes that somehow become starkly sinister. And, of course, he’s really being led up the garden path. 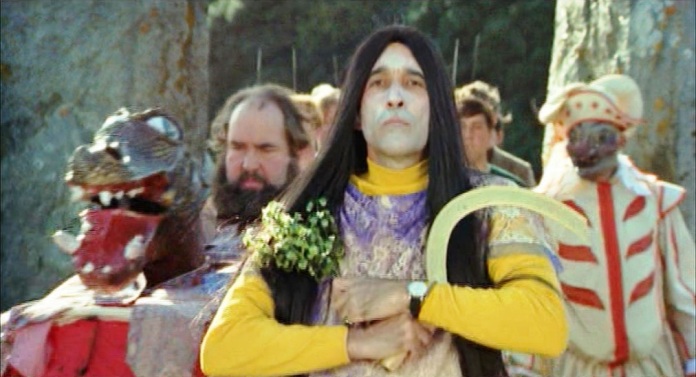 Like Shaffer’s restlessly clever Sleuth and his script for Hitchcock’s Frenzy (1972), the narrative is a series of sliding screens that eventually unveil a vicious trap. Unlike either, however, it gains an uncommon resonance in pitting its iron-clad, moralistic, Christian antihero Howie against Summerisle and his pagan villagers in what initially seems like a broad hippie joke, but concludes as a grim ode to conflicting brands of religious extremism. In truth, Howie’s a bigot, not merely a zealot, quivering in outrage when confronted by anything that doesn’t adhere to his personal certainties. But he’s also a genuinely faithful man. Lord Summerisle seems fuelled by a real enthusiasm for the creed his grandfather considered a mere employee motivational tool, which lends the finale its great force. Lee, in one of his best, if most broad performances, presents a deft variation on his imperious, charismatic avatars of evil by presenting in Summerisle an avuncular, counterculture-inflected peer with the perfect pitch of indulgence and dismissal of a man of great intelligence, courtesy, and power—and one who’s also not afraid to dance dressed as a girl.

The Wicker Man is fascinating for being one of the very few films to take a more than cursory glance at pre-Christian British society and the lingering echoes of it that still define the national culture, from hobby horses to maypole dancing, locating the darker culture that lies behind such prettified tourist board tropes. Hardy says he carried all 25 volumes of The Golden Bough on set with him, and Portree, the village on the Isle of Skye where they filmed, was itself the locale for a peculiar Highland Christian subsect. The film’s structure both captures the appeal of an earthier, life-loving, sexually celebratory religion, whilst also confirming the brutal totemic necessities of such codes which rendered the metaphorical comforts of Christianity preferable; in its way, the film is something of a case study in socioreligious historical shifts.

Hardy’s direction, remarkably assured for a debut, conjures a unique atmosphere not simply by inverting standard genre elements, but also in terms of the way its scenes are constructed according to songs and dances, making it, in essence, a musical (the twist on the cutesy Brigadoon, 1954, is an irresistible analogy). The songs by psych-folk composer Paul Giovanni and the specially formed group Magnet enter and become propulsive forces within the narrative in a fashion that’s definitely musical-like, as in the “Gently Johnny” sequence in which Summerisle gives a young boy to the island’s designated goddess of love, Willow (Britt Ekland), to lose his virginity. Most striking is the famous “Willow’s Song,” in which Willow dances and sings within her bedroom, taunting a feverishly, painfully resisting Howie; she gyrates and performs in a fashion that’s not such a great distance from Fred Astaire’s hotel room ecstasies in Royal Wedding (1951). It’s appropriate enough, as the motifs of the culture Howie has found revolve around revelling acts of singing and dancing, including young boys around the may pole and virginal girls circling naked in a field of standing stones—sequences that echo the opening’s presentation of Howie, his girlfriend, and his congregation singing psalms in prim array.

The film’s alchemy in turning paganism from obscure and stygian to festive and sunny, whilst still building relentlessly to its thuggish consummation, both subverts and confirms the Christian prejudice against it, a prejudice that is both returned and yet nullified by Summerisle. The lord dismisses the Judaic god as having “had his chance,” and yet also takes care to remind Howie that if he wishes to look at his death as a Christian, his fate will, if his creed is true, see him anointed as a martyr. Such engagement lends the finale more depth and force than a simple black joke, and Howie’s death shout of “Damn you!” before the fire consumes him echoes with haunting force. Neither religion is specifically validated; indeed, each is objectivised in a clash of impulses, one archetype grimly committed to murder in order to promote life, the other grimly committed to hardly living at all. It’s an interesting contrast to the (actually more violent and gruesome) conclusion of Ken Russell’s The Devils (1971), where the devout-in-his-own-fashion hero is burned by repressive forces; though Howie and Oliver Reed’s Grandier are separated by very different takes on their religious ideals, both are gruesomely consumed for attempting to stick to their private moral paths, very much a persistent theme of films of the era.

A strong undercurrent of deadpan comedy inflects the film, from Diane Cilento’s hilarious performance as Miss Rose, the village schoolmistress, who offers chipper explanations of the symbolism of the may pole to her girl students; the jokey cameo by top Hammer temptress Ingrid Pit; and Lee’s sniffy conversation with Woodward, summarizing his grandfather as “incredulous of all human good.” Most vital of all is Woodward’s excellent central characterisation, swinging from vinegary self-satisfaction to self-brutalising sexual frustration to agonised final reckoning. That he delivers in the final scene is vital for the success of the film, and he does, dare I say it, with real flare.