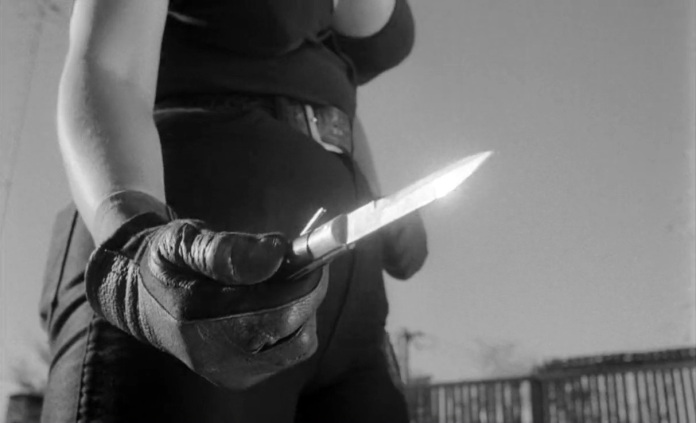 Meyer’s is a name to conjure with, if not without a certain ironic fizz, as a director whose most famous work straddled a narrow hinterland of soft-core that stands between standard exploitation cinema and porn. His films, always populated by buxom, semiclad lovelies, had the quality of a kind of performance-art joke mixed with a scurrilously satiric and chaos-courting sensibility. Barbara Steele once accurately described the essence of the cult movie as possessing an “element of unease” sourced in “anarchy, transgressing certain taboos; they are almost always excessive and camp and speak to the counterculture.” Faster, Pussycat! Kill! Kill! became almost immediately iconic for the then-emerging camp brand, particularly a young John Waters, who turned Divine into his personal Tura Satana, as well as future punks and pop artists. From its title, a deliberate combination of elements Meyer thought would be alluring for audiences—speed, sex, violence—to its final frames, Meyer’s breakthrough movie is almost hallucinatory in its depraved intensity. 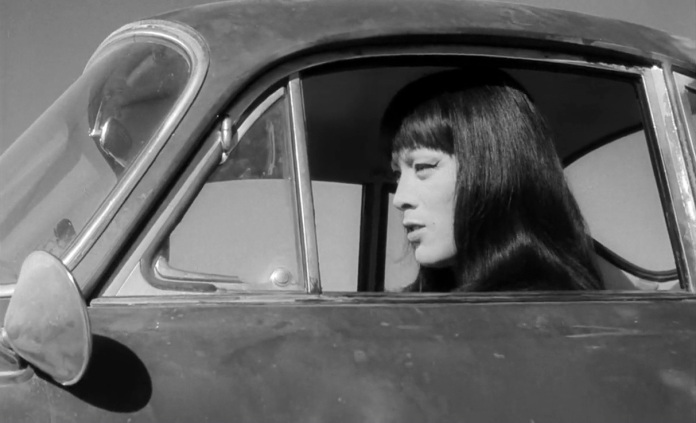 Satana, Japanese-born and Chicago-raised, had been working as an exotic dancer since the age of 13 and had also become a proficient martial artist. She took an active part in inventing for Meyer a character she and a lot of women she knew wanted to be like: fearless, physically indomitable, and utterly powerful to the point of psychopathy. Varla suggests a cross between a superhero, the villainess of a vintage girly S&M comic a la John Willie, and a gender-blurred anticipation of the kinds of unstoppable juggernauts played by Schwarzenegger and his ilk. The odd thing about Faster, Pussycat! Kill! Kill! is that, in many ways, it’s merely a sturdy film noir executed with a rocketing pace and force that would have made Don Siegel and Sam Fuller proud, revolving as it does around a feminised variation on a Starkweather-esque thrill-killing scenario.

The film’s sweaty, overheated demeanor is the product of a film director expert at building and sustaining several varieties of tension. The editing by Meyer and the photography invest the film with the kind of subliminal force that makes it an ideal: the fantasy of trash you’ve always wanted to see but never dreamt someone actually made. The usual veneer of sociological import is suggested by the opening voiceover by John Furlong, which rings in the ears as animated bars resembling soundtrack strips slide down the screen before the explosive editing of the go-go club scene, an opening that’s a unit of sheer pop art perfection. Meyer aims to deliver cheap thrills immediately with the dancing sequence followed by fast driving and then a spat between Rosie and Billie that sees the two dripping-wet pussycats grappling in an angry brawl, whilst Varla looks on in amused irritation. 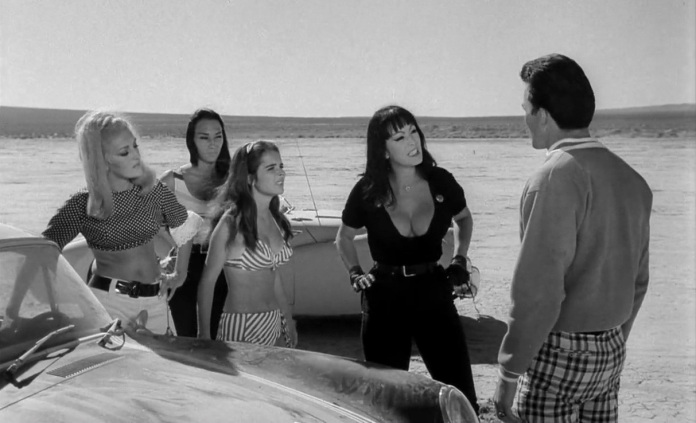 Soon enough, the film takes a dark turn when the trio, having arrived at a salt lake racing track, encounter Tommy (Ray Barlow), a speed enthusiast with gentlemanly affectations, and his trim, bikini-clad girly girl, Linda (Susan Bernard). Varla provokes Tommy effortlessly into competing with her in a lap race. When it looks like he’ll win, Varla cuts a corner and forces Tommy off course, almost causing an accident, and then starts bullying Linda. When Tommy is sucked into asserting himself violently against Varla, she takes great delight in beating him bloody and then breaking his back. This moment retains some shocking force, and the undercurrent of menace makes it a logical conclusion to an uneasy confrontation in both the clear about-face of relative strength and the ambiguity of its purpose: what is Varla reacting to, and what does she really want? 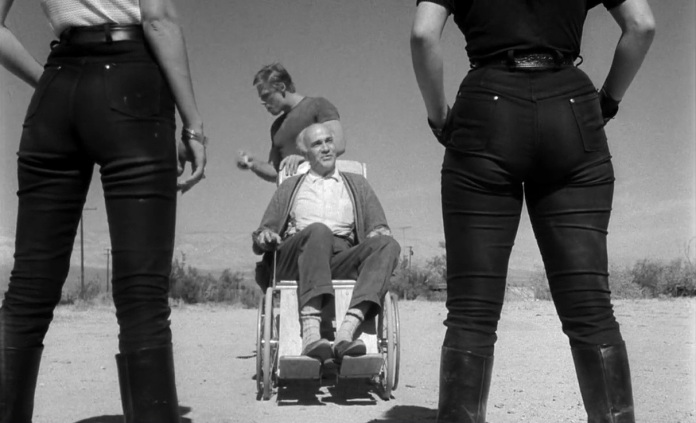 Control is the answer, and money soon proves to be as good a tool for that as any. When the threesome pauses in a small town to refuel, with Linda a drugged-up captive, they get wind of a fortune for the taking when they spy a wheelchair-bound old man (Stuart Lancaster) and the hunky son he calls Vegetable (Dennis Busch), and learn that the old man sits on a huge compensation pay-out he received after the accident that left him crippled. He was struck down by a train while saving the life of a girl who blithely left on the next train, leaving him with a poisonous misogyny that he gets the Vegetable to act out by raping and killing young women who near his dirt farm. Varla, Rosie, and Billie invent a cover story—that they’re escorting the unbalanced Linda home to her rich parents after she lost her boyfriend in a racing accident—and set the stage for a savage gender war.

Faster, Pussycat! Kill! Kill! would probably still have gained a less slanted variety of admiration without the ripe conceit of its central bevy of amazons, if they had been men or more traditional wiles-over-brawn femmes fatale. But it would have been a much less enthused fetishisation, for the blatantly sexualised, yet oddly untouchable, trio both delight and unsettle the sensual imagination, their physicality wielded as sharply as knives at the men and women they try to bewitch and intimidate. Emerging through Billie’s mocking, coded dialogue is the fact that Varla and Rosie are lovers, whilst Billie swings both ways, and a running subplot of the film is Billie’s dissatisfaction and desire for some man-lovin’ she hopes Vegetable can fulfill. But that dimwit’s head has been tied in knots by his loony tunes papa, leaving him both unable to perform in spite of his musclebound image of potency, and childlike in his emotional attachments. They could all have stepped out of various Grecian myths, the three wild amazons and the controlling, female-loathing, tragedy-provoking overlord. 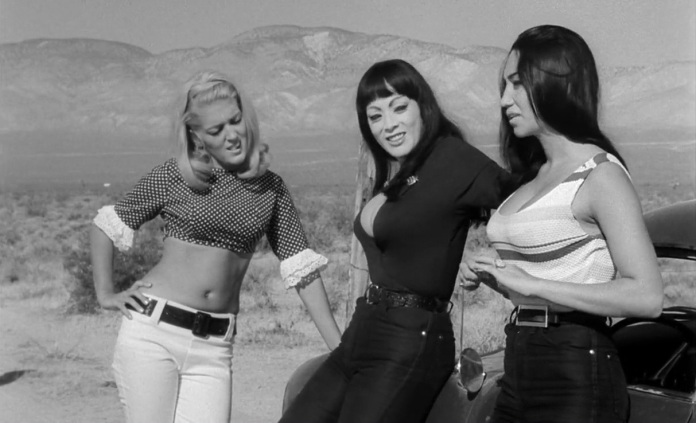 The wild card in this elemental stand-off is the old man’s second son, Kirk (Paul Trinka), the only character who seems psychically to have advanced beyond a moral and intellectual pagan age, taking up such pursuits as reading and thinking. “He’s growing away from us,” the old man notes to Vegetable. When Linda temporarily escapes this grotesque situation after the old man tries to get a piece of her, Kirk picks her up as he’s driving back to the ranch, accidentally returning her to the trap she just left. She’s utterly distraught and bewildered that he could have sprung from this regressive, barbarian race. Kirk is vaguely prissy and emasculated, something Varla senses, and she decides to manipulate him through sex to get him to cough up the location of the hidden moolah. This agenda also shades in a more honest flirtation, for Varla seems to genuinely like Kirk’s submissive, sensitive-seeming side, where any sign of resistance, even from him, turns her into a bestial slayer.

The second great notion of Faster, Pussycat!, after its villainesses, is the idea of playing them off against masculine characters who are enacting the kind of twisted macho intrigue then very popular in mainstream American drama, in theatrical works like Death of a Salesman and Cat on a Hot Tin Roof and movies, especially in many 1950s westerns, where a failing patriarch and rebellious, insufficient sons battle out their psychodramas. In those works, women are usually passive or manipulative bystanders, but here the genders are actively at war, an idea that both subverts and extends that theme. There’s a kind of fantastic equality in the equation that was utterly new when the film came out. The film’s lone interval of relieving cordiality occurs when the two camps sit down for a meal; all parties act their various parts and tenuous amities form between Billie and the old man through their shared love of whiskey, Billie sympathizing with the captive Linda, and Varla coming on to Kirk.

Soon enough, however, the situation erupts, when Billie deliberately gets drunk enough to give Linda a chance to escape. The old man hopes to track her down first and subject her to Vegetable’s abuse, causing the others to reflexively chase after her to thwart his depraved intent. The fact that cutesy little Linda is threatened on both sides with fatal, sexualized violence—what Varla and company really intend to do with her is ambiguous, considering they would have done far better to have killed her off, if that’s what they wanted, back where they left Tommy—gives the film a compulsive edge. Billie, although complicit in crime, is not instinctively antisocial like Varla, instead merely hungry for thrills; she is the most humane and likeable of the three girls, a tendency, however, that makes her the odd one out. A tenuous understanding seems possible when Vegetable can’t bring himself to assault Linda. When Kirk slaps his father trying to extricate the key to the family’s truck from him, it seems the father’s power is broken, and Varla is momentarily humanised and dizzied by this spectacle of human frailty and warped values. 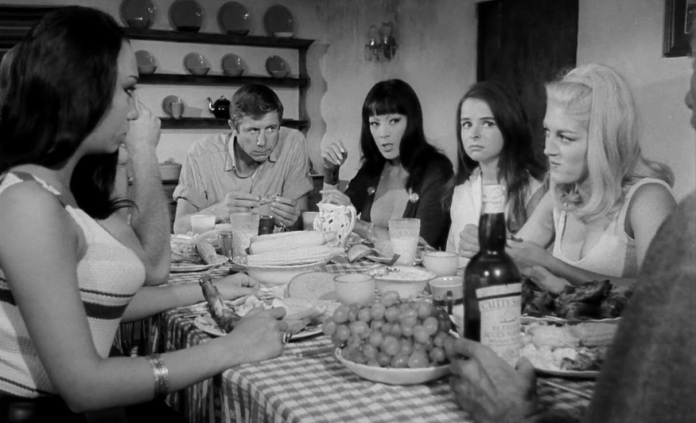 That possibility, however, soon disintegrates when Billie decides to dispatch her wicked friends: Varla lances her in the back with a switchblade knife, an act that so deranges Vegetable that he stabs Rosie to death in revenge, whilst Varla runs down the old man, his shattered wheelchair disgorging the money he’s literally been sitting on. Seeing Rosie dead, Varla attempts to run down Vegetable, too, but in an amazing spectacle of competing forces, he proves strong enough to hold off Varla’s car as she tries to crush him against a wall, but he still falls flat, broken and twisted. Varla then sets off to finish the last of her potential enemies, Kirk and Linda. The conclusion leaves the safely, sparely hetero-normative couple of Kirk and Linda standing in an ending not without ironies. 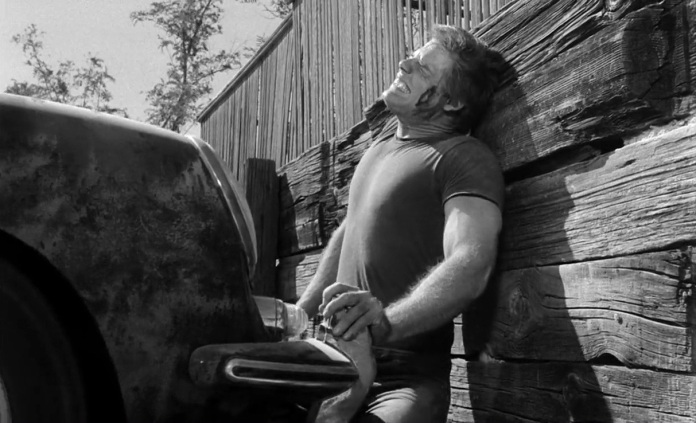 The finale, where Kirk and Linda try to escape and battle the relentless, remorseless Varla, resembles the last act of dozens of subsequent thrillers and action films, like Cameron’s The Terminator (1984) and Michael Mann’s Collateral (2003), with the exception that in almost all of those films the juggernauts are male. Bookish Kirk puts up a better fight against Varla than anyone else, fending off a threat to his newly designated mate Linda like a caveman in a primal contest that takes place in an arena in the surrounding wastelands—except that rather than fending off a wild animal or rival male, he’s coming off second best to a stripper. In the end, it is Linda who defeats Varla by ramming her with the truck, thus taking on some of the overt empowerment and fighting potency of the amazon women as both anarchic femininity and vicious patriarchy having finally destroyed each other. 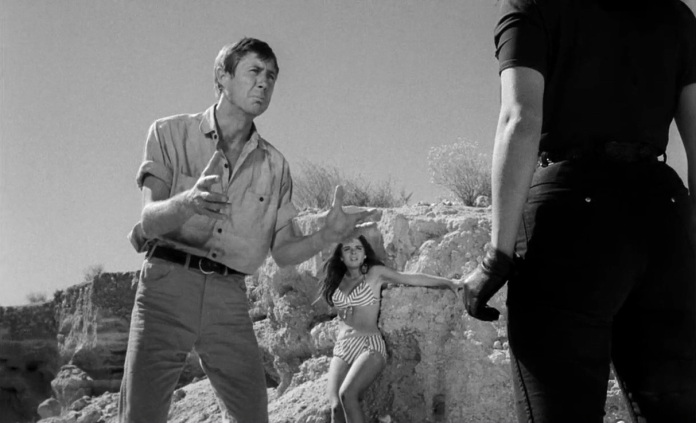 This almost perfect parable, expressed in the most overheated of manners, makes Faster, Pussycat! Kill! Kill! especially compelling as a fetish saga and social satire, though the film works very well as a standard thriller. It’s for the best that Varla dies at the end, because she’s too crazy and destructive to be allowed to remain. But, of course, it’s also disappointing that a galvanising force (think James Cagney’s Cody Jarrett with massive knockers) in her transgressive, reprehensible delight has to meet an end at the hands of lesser mortals. She could well have gone on to star in a long-running series, wavering from one side of the law to the other. Satana’s a great presence on screen, but not much of an actress, with her line readings coming out in the same bristling, harsh enunciation. All three of the leads are limited, with Lancaster giving the only “good” performance, but the stylisation of their personae is perfect for the material. Meyer’s determination to cultivate his peccadilloes eventually stymied his chance to ascend high up the ladder of American filmmakers, an ascent he could have managed given his fearsome cinematic technique. Perhaps in the end, like his antiheroine Varla, Meyer was just too much for the squares, and too much himself to care.